The Council of European Canadians regularly publishes articles about the historical significance and achievements of Western civilization. We believe it is important for EuroCanadians to have some knowledge of Western Civilization for three reasons. Firstly, Canada is an extension of Western Civilization. Don’t believe the lie that Canada has always been a nation created by “immigrants from diverse cultures and races”. All the institutions, legal systems of common and civil law, educational curriculum, transformation of wilderness into productive farms, all the cities, the parliamentary traditions, the Christian churches, the entire modern infrastructure of railways, ports, shipping industries, highways and airports, were created by hardworking EuroCanadians.

Secondly, what is happening to Canada, the celebration of non-Western immigrant cultures, the demonization of Canada’s Western heritage as “racist” and “genocidal”, is occurring across the Western world. Question the misleading claim that “Canada is uniquely a multicultural nation”. They are making this same claim in Australia, New Zealand, in the so-called “melting pot” known as the United States, and in almost all the nations of Europe. We must view the struggle for the preservation and enhancement of our EuroCanadian heritage as a grand geopolitical struggle for all the Europeans peoples who created Western Civilization — in competiton with the other major civilizations of China, Islam, Black Africa, and India.

Thirdly, Western Civilization is a creation of the White European Race, and it is far the greatest in human accomplishments. Whites are continually bombarded with negative views about their history, how they “stole the land” from “indigeneous peoples” and how they became affluent through the African slave trade and the colonization of the third world. As Ricardo Duchesne has explained in his book, The Uniqueness of Western Civilization (2011), all the peoples of the world, the Chinese, Zulu Africans, Muslims, have practiced imperialism and colonization. The difference is that the West was incredibly successfull in spreading modernization around the world, abolishing slavery everywhere, and diffusing its technological knowhow. It is crucially important for EuropeanCanadians to be cognizant of the world historical reality that their ancestors have been the most accomplished in all the endeavors of human life, art, science, exploration, philosophy, and nation building.

I. Canada is an Intrinsic Member of Western Civilization

It is very hard to make sense of the history, institutions, and values of Canada without an understanding of  its Western roots. The ethnic European nature of the settlers who founded Canada, the parliamentary institutions and representative assemblies, the common law and civil law systems, the Christian religions, and the values of individual rights, freedom of the press, freedom of assembly, and rule of law, are all expressions of Canada’s foundational Western heritage.

Canada’s legal system is based on the English and French legal systems brought in the 17th and 18th centuries by the settlers who founded Canada.  After the Battle of Quebec in 1759, the country fell under English common law, except for Quebec, which follows civil law, which is based on the French Code Napoléon. The common law is law that is not written down in any code or body of legislation, but is based on precedent or past judicial and customary decisions, arising from long practice. These precedents guide judges in making later decisions in similar cases. Civil codes, on the other hand, contain a comprehensive statement of rules and general principles to deal with any legal dispute that may arise. Courts in a civil-law system first look to a civil code, then refer to previous decisions to see if they’re consistent. 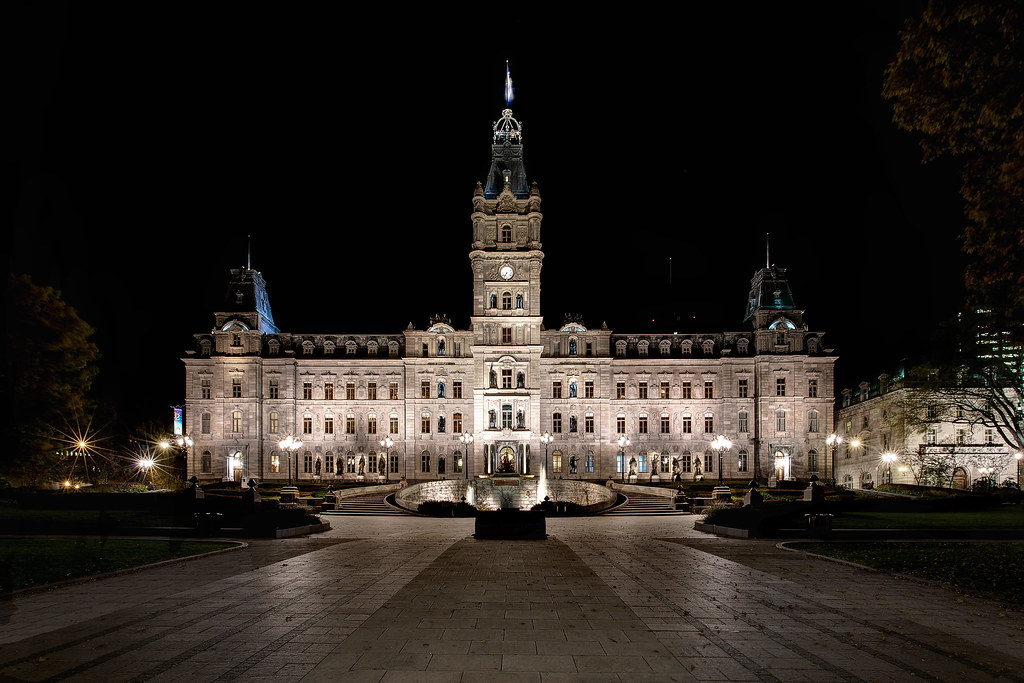 National Assembly of Quebec constructed between 1877 and 1886. It features the Second Empire architectural style of France.

The modern-day Parliament of Canada is a direct product of Canada’s close relationship with Britain both as a colony and as a nation  in which 90 percent of all immigrants before 1961 were from the British Isles. The religious denominations and churches of Canadians outside Quebec were overwhelmingly Protestant. The language, architecture, symbols, education and institutions were British in origin. The Assemblée nationale of Quebec had its origins and inspirations from the National Assembly of France. From its beginnings in the early 1600s up until recent decades, the population of New France was  overwhelmingly a product of the high fertility rate of the Quebecois in combination with immigrants from France. The Catholic Church played a key role in the development of Quebec, not only in performing religious functions, but in the provision of many of the services we now attribute to state authorities in the areas of education, health care, charity, and family planning.

II. The Struggle for Canada is a Pan-Western Struggle

The immigration replacement we are experiencing in Canada can only be fully comprehended as a Western-wide phenomenon implemented by a rootless globalist class that feels no loyalty to any nation and culture but is only interested in maximizing their wealth. “Build Back Better” means Replace the White World with a race of rootless migrants easily controlled by the largest digital/internet companies (Amazon, Microsoft, Google, Facebook, Intel, Netflix, PayPal, Bloomberg, Spotify, Twitter) as well as the largest pharmaceutical companies (Pfizer, AstraZeneca, Sinopharm, Merck) and the largest banks (Industrial and Commercial Bank of China, JPMorgan Chase, HSBC, BNP Paribas).

Globalist companies have realized that the leftist ideology of multiculturalism, BLM, transgenderism and immigrant diversity, are actually beneficial to their interests in the way they dilute and confound the stable national identities of European families with roots and traditional values. They want race-mixed humans with no clear sexual identities, no national roots and no ancestral ties, who can be easily manipulated into enslaved peons of globalist generic companies, FB pages, Netflix, and Twitter accounts. The globalists know that immigrants prefer to shop in COSTCO and Walmart rather than in small stores rooted in the history of White nations. Immigration for them is a means to keep wages low and to increase the total market value of goods generated from a growing population. They want a Western world plastered with functional real estate, shopping malls, highways, and dollar stores.

The Left, for its part, realizes that these “progressive” companies are the most effective agents to bring an end to the “xenophobic nationalism” of Europeans in favor of a mongrelized, anti-Christian and anti-White “multicultural” landscape. It believes that it is immoral for Whites to inhabit the wealthier nations of the world without sharing their wealth with the non-whites “exploited by imperialism”. They view immigration as a tool to balance per capita incomes across the world by releasing population pressures in the third world and encouraging “greedy” Whites to share their economic pie with non-whites. It also views immigrants as a new voting block that can ensure the realization of their progressive dreams for a race-mixed world inside all White nations.

However, EuroCanadians must understand that this convergence of the corporate world with a multicultural Left is happening only in the Western world. All the highly advanced nations of the non-Western world are thoroughly globalized economically yet none of them promote mass immigration and multiculturalism. Japan, South Korea, Taiwan, China, India do not have porous borders. The difference between Western nations and non-Western nations is that Western nations are dominated by an ideology that is more appropriately called “globalism”. We should not confuse globalism with globalization. Globalization is an inevitable component of the development of modern transportation and communication technologies. Globalism, on the other hand, is not an inevitable phenomenon but a political ideology aimed at the liquidation of the national identities of European peoples across the world. It is a deliberate political choice, no more inevitable than communism or transsexualism.

It is only in the Western world that we are witnessing the complete alteration of the historical heritage of its founding peoples, the destruction of their statues, the “decolonization of the curriculum” across universities, the changing of the symbols,  anthems, the coat of arms, and Christian images. For this reason, Canadian patriots need to frame their struggle for the preservation and affirmation of their heritage as a struggle in solidarity with the European peoples who created Western civilization. As Samuel Huntington explained in his widely read book, The Clash of Civilizations (1996), the West is not merely a geographical area based on liberal values open to all religions and races in the world. “A civilization is an extended family, and, like, older members of a family, the core states provide relatives with both support and discipline.” The peoples of all civilizations, Chinese, Islamic, African, Japanese, and the mestizo Latin American world, feel a civilizational kinship along blood lines, and “in civilizational conflicts…kin stand by their kin”. Canadians must rally to the efforts of all Europeans peoples belonging in their different nation states “to protect kinsmen” across the Western world. This is why CEC pays a lot of attention to immigration politics across the West.

Speaking about the far greater accomplishments of European peoples is not petty chauvinism. It is, to the contrary, an expression of care for the highest that humanity has achieved. Europeans were responsible for about 96% of the major ideas in science, about 47 of the 50 greatest innovations in history, almost all the greatest philosophers, the greatest literary novels, the most creative styles in architecture, painting, music, sculpture, and car designs. The fact that Europeans originated all the main fields of knowledge — geology, archeology, biology, physics, economics, history, sociology, paleontology, botany, astronomy, particle physics, organic chemistry — speaks volumes about the immense curiosity, relentless striving, and mental powers of the White race.

Do not accept the nihilistic claim that you don’t have a right to be proud of your ancestors. You must be proud of the Canadian settlers who built Canada under enormous hardships, without electricity and running water, and without government assistance. Otherwise they will continue to trample upon your ancestral heritage, calling your ancestors racists, genocidal land thieves. If you don’t affirm with pride your ancestors, they will walk all over your family heritage and replace it with “vibrant immigrants” who are mainly living off this past. Nietzsche once said that “a race, like any other organic formation, can only grow or perish; the stationary state does not exist.” Don’t be satisfied with achieving equity with those who want to destroy you. Use the high achievements of your ancestors as an inspiration to enhance the survival and greatness of your people.

The aim of immigration replacement and relentless condemnation of White culture is the elevation of non-European immigrant cultures to a higher moral level inside all European nations. For all the criticisms one can make against the old ruling aristocratic elites of Europe, it stands  beyond question that the monarchical aristocracies of Europe had a deep appreciation for the best in music, art, and thought. They patronized the arts for centuries, listened to the best music, encouraged magnificent architecture, and communicated with the best minds of Europe. The globalists in charge of the West today are men without chests, sexually perverse feminists who resent male greatness, preoccupied with the satisfaction of petty pleasures and the mediocre morality of “diversity is our strength”.

The West is far the most accomplished civilization in the arts and sciences. Yet it is demonized everywhere. Find time to read about your ancestors. Control the narrative about your heritage.