Never Point Out Things The Prog Does Not Like To Hear In the progressive world there is no insight or even truth seeking: only the maintenance of social control through ideology. The traditionalist admits to a degree of uncertainty, the possibility of being mistaken and the continuing need to prepare for the worst. This sensible approach is absolutely verboten for the prog.

Let us try to understand the prog by examining another religious type: the Christian. He will at least hear you out and “turn the other cheek,” even if you laugh at him. The prog disciple of the new religion, progressivism, may even join with you in laughing at Christianity, but will become offended, frightened, and possibly violent if you should make similar remarks about his own belief. The prog does not suspect the Christian origins of his own faith.

More importantly, no one today has to take the Christian preacher seriously if he doesn’t want to. Christians and atheists are able to function together in the same society. Not so the racialist and the prog. The prog will not pity you for failing to find the one true faith, nor even rest satisfied with the expectation that you will burn in hell in the afterlife. For him, you are a dangerous threat that requires exorcism. The prog rather resembles the missionary Christians from history like the Portuguese and Spaniards, who beat Christ into the people or bribed them with a bowl of rice. The Christian nowadays is widely ignored by the secular society around him.

Progressivism is like a religion whose devil has convinced you he doesn’t exist. Its truth is so taken for granted that it doesn’t require the song and dance of ceremony to maintain faith in the people. Everyone is already converted.

The prog’s mind is riddled with latent contradictions and hypocrisy. Still thinking of himself as society’s rebellious counter-cultural element, he now makes up the dominant class: one part cultural Marxist and one part fat-cat capitalist, having his cake and eating it. His power is omnipresent across the political spectrum. This prog is not an experienced man of action of the world, or kunshi (‘superior gentlemen’) as the Japanese say, but a lightweight: a man of small calibre, a shojin who is motivated to earn money with as little effort as possible, pursuing both wealth and coercive power.

The so-called Right consist of the laissez-faire free-trade progressives, happy to build the global village as long as the short-term profits are high and the taxes low. He enjoys a comfortable life thanks to his fortunate historical position. So in practice, he is working for globalism as much as the leftist. Both are progs, what some today call Cultural Marxist: an ugly brew of greed, pathological narcissism, and ideology.

This is why you are better off not saying anything—regardless of who you talk to—that is going to raise ideas the Beatnik CEO is not comfortable with and bring you into suspicion: e.g., letting the cat out of the bag about how his generation’s behavior will have repercussions for you long after he is gone.

The prog does not so much have a goal as a mission. He may even be aware that the “imagined community” he is supposedly working towards is vague, wishful thinking. But it is still an ideology: a system of beliefs to console him, explain the world around him, and tell him what to do. His faith and hope cannot tolerate the contemplation of any alternative. It isn’t perfect, he might admit, but we must still cooperate, understanding that it is in the process of becoming perfection. Questioning the project might cause it to come tumbling down before it is perfected. As with any religion, reason can be shut out to preserve faith.

Untroubled by doubts concerning his convictions, the establishment prog has made himself physically and emotionally comfortable. He enjoys short-term financial gain while feeling that he is on the side of right. Remember, the prog was hatched in a golden age of power and consumerism, with the “counter-cultural” movement in the sixties. His new “ideas” fit well with economic growth. He has even created whole industries of stable employment: social services, yoga classes, real estate speculation, and big government (even as he has chucked manufacturing – the real source of national power – overboard).

Unlike the boomer who criticized his parents, the middle-class “haves,” for having more than the rest of the world, the prog isn’t troubled in his own conscience since he can claim the economy is now “global” and “inclusive.” He is a less obvious hypocrite because, at least in theory, all the colors of the rainbow have a fair shot. So he is at peace with all he has.

The prog has shut all doors to information and alien opinion, only “knowing” what he wants to know. He has not merely silenced opposition: he has swept under the carpet everything different from what he expects to hear. Brave men risked their lives passing information on to tyrants like Genghis Khan and Stalin, but even if these brutal dictators killed the messenger they still gained the intelligence first. They may have been paranoid and cruel but at least they were smart enough to consider everything. We on the other hand have an establishment that is willing to accept a contrived historical memory loss, an avoidance of truth, and live its life thinking that music makes the world go around. If you mention something the prog does not want to hear, you’re simply not giving peace a chance. 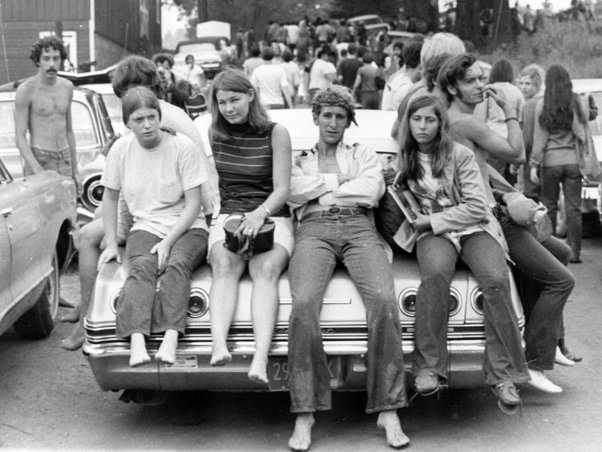 When you think of a revolution you think of extreme hardship, a long period of violence and perhaps famine, resulting in a new leadership. Our “leader” today is no rebel, but history’s luckiest bastard. The Western Cultural “Revolution” in the sixties must have been the only revolution in history that provided a better time for the revolutionaries … all the “rebels” had to do was have more sex, take more drugs, and produce fewer children. And it worked! Peter Fonda’s character in the 1966 movie “The Wild Angels,” sums it up well:

“We don’t want nobody telling us what to do.

We don’t want nobody pushing us around …

Well, we want to be free.

We want to be free to do what we want to do.

We want to be free to ride.

We want to be free to ride our machines without being hassled by the man.

And we want to get loaded.

And we want to have a good time.

And that’s what we’re going to do.

We’re going to have a good time.

We’re going to have a party.”

It was not so much a revolution as a Great Fall.

Recalling a failed coup after WWI, rebel Lieutenant Frederick Wilhelm Heinz said: “Blood is the cement of revolution. Whoever shrinks from letting it flow is no revolutionary.”  Our American “rebels,” by contrast, had the highest standard of living in the world, but wanted more. Thousands of years of tradition fell easy prey to the prog “rebel.”

A prog from the financial arm of the establishment will become distressed when you question the harm his overseas outsourcing of high-tech manufacturing will do to your nation’s people and economy. Any suggestion the “local people” are somehow to be treated differently than the billions of the world’s other workers and consumers is a threat to this man’s lifestyle. So is anything that refers to the long-range future. It might get you labelled a “protectionist” or “China-basher.”

Who, he wonders, could be against the global economy of “open-borders,” “free-trade,” and “diversity?” He takes all this for granted the same way people used to take the existence of God for granted, or the law of gravity. Today’s proud “Capitalist” is able to block out reference to his own profits made on the backs of “communist” labour in China.

I am not suggesting you join any true counter-counter-cultural underground where you can speak freely in dimly-lit basements; that is what I would warn you against. Forces in the future will destroy the prog, you can count on it—if not through reasoned discussion, then through war: aut consiliis aut ense. But not necessarily in your lifetime, and in any case certainly not while having fun amidst rising prosperity. You must save yourself for more important battles in the future.

If you are at a social gathering and a woman you meet tells you she manages a hospital department for slow learners, an awkward silence would be better than saying, “I’ve read recently that down-syndrome people are having a lot of children.” This may be an important observation, but it raises too many uncomfortable ideas, and reveals you as a trouble-maker. You are supposed to remark on how wonderful it is that she is helping people; end of story.

You should not even point out certain objective facts. The prog is a deadly serious person who cannot distinguish between different types of information. In what I refer to as a “positive-negative,” you cannot even say something that sounds like it is good, such as saying, “I like Chinese.” Simply being aware enough of something to point it out makes you guilty by association.