When McKinsey Comes to Town 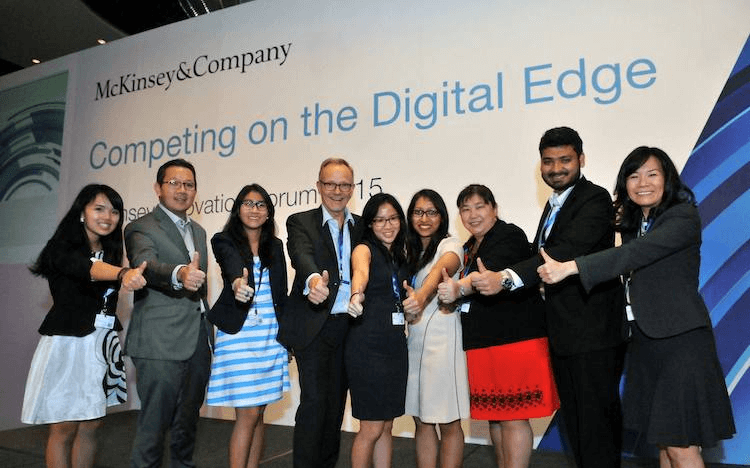 When the world’s most popular global management consulting firm comes to town with its advisors straight out of the world’s best universities like Harvard and Oxford, and which could advantageously replace any government with its too often corrupt, incompetent, and overpaid civil servants, one wonders if McKinsey might not be the future world government that the Davos elites are trying to set up on the sly?

At first glance, one might be inclined to think so, given that its advisors are present everywhere, in the private sector as well as in governments and health monitoring agencies such as the Center for Disease Control and Prevention (CDC) and the Food and Drug Administration (FDA).

McKinsey is an uprooted, cosmopolitan, chameleon-like firm that can adapt to almost any situation, anywhere in the world, at a moment’s notice, with diligence and above all, with discretion. Secrecy is indeed vital for this company, which can work at the same time, without a qualm, with several clients with opposing interests.

We will never know if our leaders followed its advice to the letter. It is highly likely that they did, since all the rich countries followed the same plan, but this information is confidential. It’s in their standard contract. In other words, “what I do with A is none of B’s or anyone’s business.”

One thing is for sure, with the benefit of hindsight, it turns out that “vaccination” was never the solution to this fake pandemic. In fact, we now know, with certainty, that these untested experimental injections are not only ineffective, but associated with a plethora of adverse effects: infertility, miscarriages, clotting problems, heart disease, strokes, neurological disorders and immune dysfunction, rapid onset of extremely aggressive cancers (turbo cancer), etc.

The solution was to isolate patients as soon as symptoms appeared and to treat them early with inexpensive and safe drugs such as hydroxychloroquine, ivermectin, zinc and antibiotics. However, despite an undeniable presumption of effectiveness, now supported by hundreds of studies, the authorities banned all early treatment with the specific aim of imposing “vaccination” as the only possible solution.

In fact, all the health measures and media campaigns converged inexorably, as if in a funnel, towards a single goal: mass vaccination and the health pass.

Is it possible? Can McKinsey, the world’s biggest and most prestigious consulting firm, lie so much? The answer is definately YES, according to American investigative journalists Walt Bogdanich and Michel Forsythe, who have just published the book When MacKinsey Comes to Town. (1)

Under the mask of the best intentions in the world, this lawless firm is indeed capable of doing a lot of dirty work to increase its profits and those of its clients or to benefit the governments and institutions that hire them. This is why they are paid, and they are known to deliver the goods, regardless of the consequences.

Did they knowingly declare emergency measures to allow Big Pharma to push through these “vaccines” and other highly toxic drugs like remdesivir at $2000 a treatment without proper testing? Did they advise Big Pharma to lie to the public by making it believe that protecting oneself with a “vaccine” protected others, as the media has repeatedly said in order to impose these injections and the health pass?  We will never know for sure, but it is very likely.

To give you an idea of whom we are dealing with, here is a very partial record of the scandals associated with this international consulting firm headquartered in New York, USA.

Induced Enron to set up a false accounting system that caused its collapse overnight. One of the most serious frauds in US history.

Recommended that the Boeing Company bribe eight Indian officials to operate a titanium mine.

Encouraged banks to securitize their customers’ mortgages via mortgage-backed securities and to increase the amount of debt on their balance sheets to benefit from leverage, thereby increasing their risk exposure.

Rajat Gupta, McKinsey’s managing director for 9 years between 1994 and 2003, is sentenced to 2 years in prison for insider trading. The financial trial is described as the biggest financial scandal since Madoff.

Involved in the scandal and stock market collapse of Valeant Pharmaceuticals. The New York Times reveals a potential conflict of interest between McKinsey consultants and the McKinsey-owned hedge fund MIO Partners. Three of the six senior executives were former McKinsey employees, as was the chairman of the talent and compensation committee.

Encouraged Big Pharma to prescribe dangerous drugs such as opioids in order to increase sales. According to court documents produced by the plaintiffs, the consulting firm recommended that pharmaceutical companies focus on addictive dosages because they are more lucrative. It is estimated that the use of such prescription drugs quadrupled between 1999 and 2018, the period covered by these proceedings, during which 500,000 Americans died from opioid abuse.

Did McKinsey also know that none of the health measures — containment, distancing, masks, etc. — were effective? Did it also know that countries like Sweden that did not impose health measures did much better than Canada, for example, which did impose them, without any evidence of effectiveness? Why the masquerade? To scare people into doing things they would not normally do, that’s why. As Naomi Klein puts it,

[…] the triggering disaster — the coup, the terrorist attack, the market collapse, the war, the tsunami, the hurricane [the pandemic], [the climate crisis] — sends the population into a state of collective shock. The whistle of bombs, the echoes of terror and the roaring winds [melting glaciers], [COVID-19 deaths in hospices as well as the number of cases], ‘soften’ societies, much like the thunderous music and beatings in torture prisons. Like the terrified prisoner who betrays his comrades and denies his faith, societies in shock give up rights that in other circumstances they would have jealously defended. (2)

PCR tests are also a monumental scam, simply because they are not specific for this virus. To add insult to injury, they also calibrated their sensitivity so high as to be able to find COVID even in a cup of coffee. The vast majority of the test results were false positives, giving the false impression that the grim reaper was lurking around every corner. Most of the so-called “cases,” in other words, were not sick.

All this for a virus that has an inconsequential mortality rate for the vast majority of the healthy population. Children are insensitive to the disease; the risks of secondary reactions to the injections are far greater than the benefits. The only people really at risk were the very old, over 80 years old, and with several serious diseases; since vaccination could not help, early treatment with the drugs listed above was the key to saving lives. 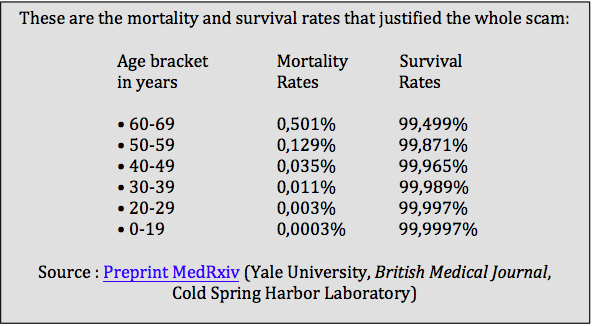 More people have died from the “vaccine,” containment measures, remdesivir, and ventilators than from the disease, and this is just the beginning. Big Pharma made billions from this scam, and some unscrupulous doctors made millions.  According to Russel L. Blaylock of the research group, Theoretical Neuroscience Research,

For the 1st time in medical history, major experts in virology, epidemiology, infectious diseases, and vaccinology have not only been ignored, but are also demonized, marginalized and in some instances, become the victim of legal measures that can only be characterized as totalitarian. Discussions involving various scientific opinions have been eliminated, top scientists have been frightened into silence by threats to their careers, physicians have lost their licenses, and the concept of early treatment has been virtually eliminated.

Hundreds of thousands of people have died needlessly as a result of, in my opinion, and the opinion of others, poorly designed treatment protocols, mostly stemming from the Center for Disease Control and Prevention, which have been rigidly enforced among all hospitals. The economic, psychological, and institutional damage caused by these unscientific policies is virtually unmeasurable. Whole generations of young people will suffer irreparable damage, both physical and psychological, possibly forever. The truth must be told. (3)

That said, McKinsey has no intention of playing along with the shenanigans of the super-rich at the World Economic Forum in Davos, which is why this consulting firm is constantly demonized in the globalist media such as the CBC, The New York Times and Wikipedia.

While there is an amount of respect for this firm, there is no shortage of attempts to discredit it by exposing its bad deeds and its sometimes corrupt management methods. But appearances are deceptive, the degenerate plutocrats of Davos are in no position to lecture anyone.

What really bothers them is the fact that McKinsey works for so-called authoritarian governments such as China, Russia, Turkey, and Saudi Arabia. The firm has also worked for Trump and Immigration and Customs Enforcement (ICE), a government agency that does not fit into the globalist’s replacement immigration strategy, and that’s an understatement.

McKinsey’s stated goal is to help its clients, full stop. When McKinsey and its consultants come to town, they work with everyone, regardless of their creed. They don’t mix politics with business. They execute, but they don’t write policy.

And that’s exactly what the globalists don’t like. Despite its many faults, McKinsey has been in the multipolar world announced by Putin for a long time and has no intention of changing its tune.

While it has helped to enrich Big Pharma and many subservients in the medical field and elsewhere, McKinsey is not consciously involved, in our view, in the Davos depopulation project. That’s not its style. And it enrages people like Trudeau who dream of a Garden of Eden, but only for themselves. They want to own everything and control the entire world population through a combination of fake disasters, social engineering, utopian sustainable development policies and food of their own making.

It seems McKinsey won’t be around to advise them, but because of the confidentiality clause, we’ll never know for sure…