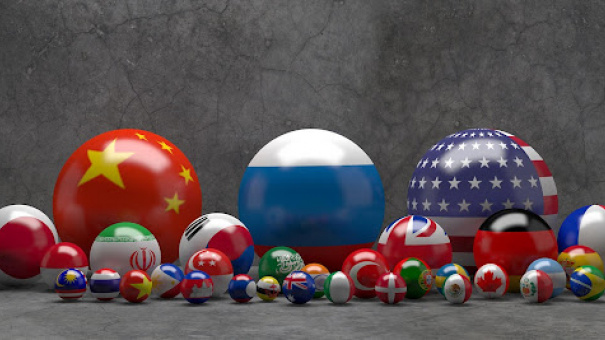 This is the first long interview with MacGregor I have seen. The word “fatigue” is often used now in reference to this war. As I see it, this war reveals the fundamental ideological conflict of our age in a way that big national events like the Freedom Convoy are unable to crystalize. The controversy over the Convoy remains over which shade of liberalism one prefers. This war is about which ideology will rule the dynamics of global politics: liberal unipolarism or traditional multipolarism. If US/NATO is defeated, it will signal the end of liberal hegemony in the world. If Russia wins, it will signal the beginning of a traditionalist alternative to liberalism in our modern times. The American and European ruling classes certainly see it as the most important global conflict since WWII. American funding of Ukraine in the last 9 months has totaled $91.3 billion, which is 33% more than Russia’s total military spending for the year. It’s double the US’s average annual expenditure for its own war in Afghanistan. Britain, Canada, Germany, and many other NATO countries have also offered billions in military and economic assistance.

Beyond integrating Ukraine into the Western liberal order, the ultimate goal is to inflict extremely high costs upon Russia (in lost lives, military expenditures, and economic isolation) in order thereby to stir regime change against Putin and create a pathway for the return of the liberal oligarchs who robbed Russia dry in the 1990s, with the eventual goal being the dismantling of Russia into smaller countries easily controlled by global capitalists. Liberal values are widespread in Russia, in the media, businesses, universities, and in the psychological make up of the middle classes. The temptation of liberal consumerism, doing one’s own thing, freedom from all collective constraints, narcissism, accompany all affluent societies. But the war has strengthened patriots to find an alternative path that recognizes the necessity of modernization without destroying the eternal truths (monogamy, love of nature, respect for ancestors, honor and loyalty, procreation, aesthetics) of the traditional past.

My takeaway from this interview: Russia went soft initially, hoping to persuade Ukrainian leadership to forego its efforts to join NATO and stop its suppression of Russian residents in the Donbas region. The Russians did not want to inflict major destruction upon their Slavic cousins. They did not anticipate massive Western support. But now Russia has mobilized a larger army that has no choice but defeat Ukraine decisively. The American world order is about to collapse, replaced by a multipolar world. The United States with its universalist liberal ideology can’t tolerate independent spheres of power in the world. As Macron said the other day, “we need a single global order”.

China, Russia, Japan accept the existence of other geopolitical cultural spheres, but not the US. The US wants a unipolar liberal world order. Without mentioning it by name, the interviewer brings up the Mackinder thesis. Russia is very rich and self-sufficient in resources. US/NATO will not be able to defeat Russia. As a result, Germany, with its long historical links with Russia, will reach a rapprochement with Russia that “will become permanent”. NATO will “crumble”.

The open borders policies of American/NATO are intended to “dilute” and destroy the ancestral peoples of the West. Western “cosmopolitan elites that feel no connection whatsoever to us…with no national identities” will be seriously weakened as a multipolar world emerges and as worsening economic conditions in Europe instigate a popular revolt against the cosmopolitan elites. Race, religion, nationality are essential to our sense of identity. No one in the world will accept the plan by cosmopolitan elites in the West to destroy their racial/religious identities. “You will not find anyone in Japan, Korea, or China” who will sign up to this erasure of their identities. The people signing up for this nonsense are in the West where globalists impose their anti-nationalist way of thinking. But this all coming to an end as NATO is defeated in Ukraine, and energy and food prices continue to rise during the winter. History shows that economic hardship can act as a catalyst to rebellion. Vehement dislike of cosmopolitan values + inflation and recession = political change. This analysis comes along with very an interesting take on the “Nazi” battalions in Ukraine, and the history behind it.