Winter at Whiteway, a 2004 painting by Pratt.

I haven’t thought much about Canadian art in a long time, probably not since my far-off student days, but I noticed an article on the CBC website a while ago that the Canadian artist Christopher Pratt had died. If you had asked me, before I started writing this article, to name the best Canadian artists, I probably would have cited Alex Colville, Jean Paul Lemieux, and Ken Danby for sure. I probably wouldn’t have remembered Pratt’s name, but reading about him reminded me of what Canadian art used to be. All of those artists all seemed to belong to the same school, Lemieux being a Quebec variant. I remember them all being celebrated once on TV, books on their art for sale in stores, and featured on stamps or book covers. The popular appeal of these artists, I think has a lot to do with how people were pleased and impressed by how realistic-looking their paintings were, which probably was a relief to most people that had by then been long subjected to childish and uninteresting canvases of “art” featuring squiggles (Kandinsky) or geometric shapes (Rothko). This “modern” art is best understood as Jewish art (credit where credit is due), as it was mostly admired and celebrated by Jewish critics and Jewish gallery owners. This junk was never ever part of the Western tradition, which was figurative, and the white Canadian public was never really enthusiastic about it.

I am not a student of art, but I know something about art and the work of all these artists reminds me a lot of the creations of commercial artists like Norman Rockwell and Maxfield Parrish, who I know for sure used photography and projectors to achieve a similar level of realism. Though their “drawing” appears to have been mostly “tracing”, the colouring and composition requires some thought and skill, so I am in no way dismissing their artistry completely. I genuinely still believe these now rarely mentioned individuals were our greatest Canadian artists. These days, I get the impression that the cultural vandals of modernism have mostly moved on and have left the now destroyed field of Canadian art to Indian/Inuit and black artists with their low-effort creations, which is all I see being feted these days. This “art” serves the same purpose that modern art used to serve: to mock the idea of Western and Christian art and artistry, and lowering our cultural standards and expectations.

Canadian art seems to have only begun in earnest a generation before Coville & co. with the Group of Seven. As far as I know, the Group of Seven’s paintings are all landscapes, and do not feature people. Landscapes, to my mind are better described as “backgrounds”, they look like empty stages or movie screens before the actors appear. Without people what is a painting supposed to communicate? Maybe a picture of a group of trees or a pile of rocks can communicate something to a tree or a rock, but I don’t get the message. I think it is more natural for people to identify with people than rocks and trees, and look and find meaning mostly in paintings that feature them or at least objects that can more credibly stand in for them. Danby painted animals and solitary people almost exclusively and as such his art lacks that sense of drama and meaning. 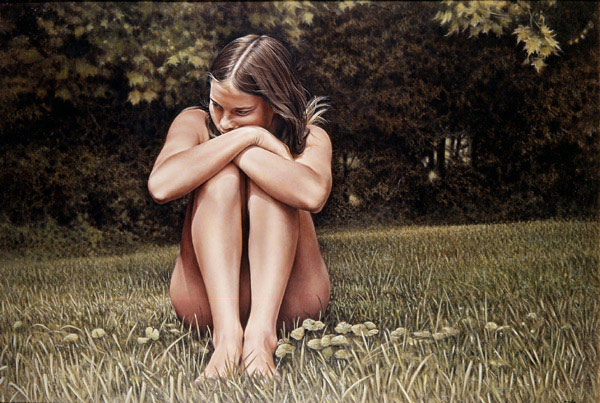 Pratt, Lemieux, and Colville’s paintings, on the other hand, feature people and suggest relationships. I never thought much about the meaning of paintings when I was younger, as I presumed these mysterious creations had meanings to deep to be understood by ordinary and uninitiated mortals. As a jaded and red-pilled adult, I now see the world as a lot less mysterious and easier to understand, and can call out what is in front of me without hesitation. What I see in Coville, Lemieux and Pratt’s paintings is the same message, and it is about the alienation, loneliness and the horror of being alive.

If you look at the work of Colville you will notice that people’s faces are all expressionless and dejected, there are no depictions of passion or exhalation. In his war painting “Infantry, Near Nigmegen, Holland, 1946” the soldiers just look depressed. Didn’t we win that war? Do not mistake it as PTS, as the same expression appears over and over again in all his work. Even in scenes of vacation outings or paintings featuring nudity, there is no sense of fun or even emotion; people just look put upon and weary. 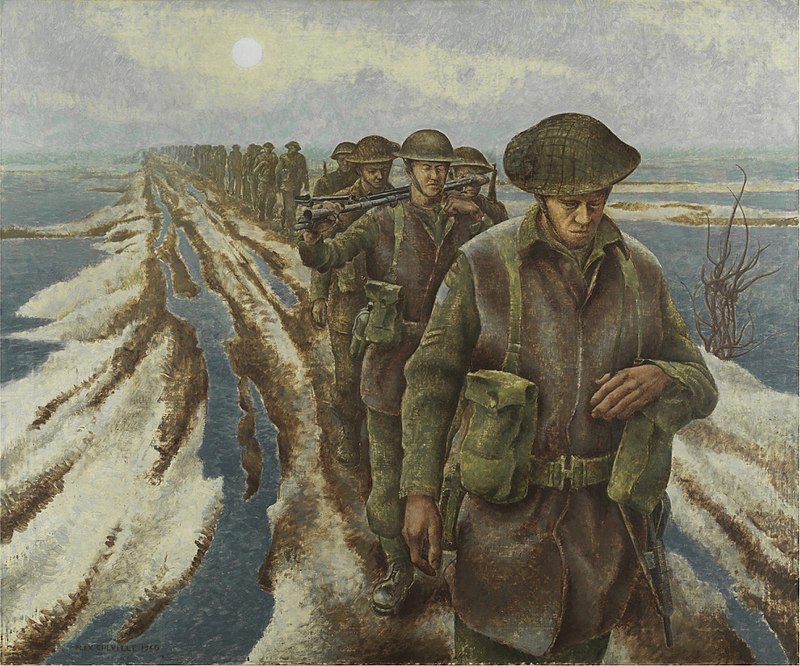 It appears that his paintings’ aims are to capture the random moments of a listless pointless existence. 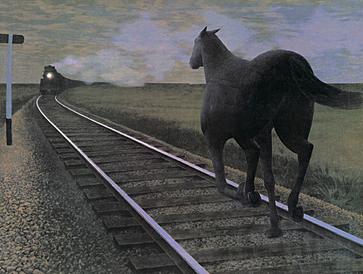 They seem to be saying: “You think boating, going to the beach, or nudity is exciting? Look at it! Does it look exciting?” It certainly does not in the dreary way he depicts it. He seems to have become aware at some point that most of his art lacked passion, however, and ridiculously attempted to put some drama into a couple of his paintings by introducing a gun. The result is that those paintings look like nothing more than the cover art for some cheesy mystery. Another famous Coville painting, atypical in its blatant symbolism, is of a black horse running straight towards an oncoming train. The message is presumably that in this awful existence even the natural world has a suicidal urges. Not very uplifting stuff.

Lemieux’s figures are more cartoonish than the Anglo artists, but the angst one feels radiating from them seems even stronger (probably due to their less convincing humanity). In his later paintings such as “Her Majesty Queen Elizabeth II and His Royal Highness The Duke of Edinburgh” and “L’ete de 1914”, people don’t seem to be aware of each other or comfortable with each other, even when they are a family or a couple. In many others, people are isolated figures in a lonely stark landscapes.

Looking at Pratt’s hyper-realistic paintings in the CBC article I read, one gets similar awful feelings. The first picture shown, “Winter at Whiteway” features a sad and abandoned Canadian flag torn to tatters. I know that sometimes a pipe is just a pipe, but the way the painting’s composition focuses on the flag explicitly, it seems to be inviting the viewer to ask: “Is he saying something about Canada?” and what he seems to be saying is: Canada is in tatters, and nobody cares. Most of the other pictures in the article feature uninviting buildings viewed from the outside, as if you are outside alone and whoever is inside is indifferent to you. A feeling of alienation is conveyed. A nighttime variation of this scene is “Deer Lake: Junction Brook Memorial,” which looks like the opening scene of a horror movie. Another version, “Fall At My Place (Some Shadows On My House)”, shows a human shadow on a house’s wall driving home the creepy feeling of being alone and excluded even more explicitly.

Another painting is of a lynx about to pounce. “The Lynx”, puts the viewer in the position of the prey in a cold landscape devoid of human life. The message seems to be: “Life is cruel and merciless. Too bad for you, no one will be coming to help you.” It is a sentiment and art that I am sure Lenin would have approved of, as he so much admired Jack London’s unsentimental “To Build a Fire,” which was in the same spirit.

Pratt, Lemieux, and Colville were by no means your standard beret-wearing, garret-dwelling, artist types; drinking Absinthe and dying of syphilis. The frightening thing is that these guys were all very respectable, upper middle-class, professorial types, and if they had anything scandalous in their lives they had the decency to keep it discreet in the upper middle-class way. As people of this class, we should recognize that they are not using their art to express opinions from the fringes of society or that they would be likely to communicate anything radical or offensive to their peers. What they were expressing was the genuine anxiety and ennui of our dying white ruling class. I’m not saying art should be all kittens and rainbows, everybody gets blue and has right to express it, but should an artist make “we are doomed and everything is pointless” the message of his whole oeuvre? A whole school of artists? The nation’s best?

Something is really wrong with a country when that is the message offered by a country’s most respected artists. This is not a Christian message. It is not even a message that the pagan Romans and Greeks would even have agreed with. It is the credo of some weird foreign death cult: a form of Satanism. There is no sense of transcendence or redemption; just a smug indifference to, and enjoyment of, the viewer’s discomfort. It is a sort of conceited upper middle-class materialistic nihilism, disguised as realism, that offers no dreams or inspiration for the next generation. A nihilism that like a slow-acting poison had been spreading for decades throughout the most respectable level of Canadian society, replacing the traditional optimism and rationality of  our white Christian heritage. The fact that no one critiques these paintings for what they are, is also disquieting. I think it shows how internalized and acceptable messages of hopelessness have become to the Canadian white public, and how approved it is by our elite. It is no surprise that these artists had no modern heirs, as they have so thoroughly salted the earth from which they might have sprung.

How far back does this nihilistic rot in white art go? The heyday of these artists was the 1960s and 70s, but the sickness eating the souls of our ruling class seems to have more widely have infected Western elites in general, and to have been active much earlier and for much longer in Europe. My first thought was of Weimar times, particularly Giorgio de Chirico, with his lonely trains and melancholy mannequins, but searching goggle for Colville images I came across the work of Vilhelm Hammershoi (1864-1916). Most of his paintings are of lonely people in lonely rooms, and sometimes just lonely rooms, which I assume are meant to depict a suicide’s last view before he jumps off the chair with a noose around his neck. WTF? I searched no further. 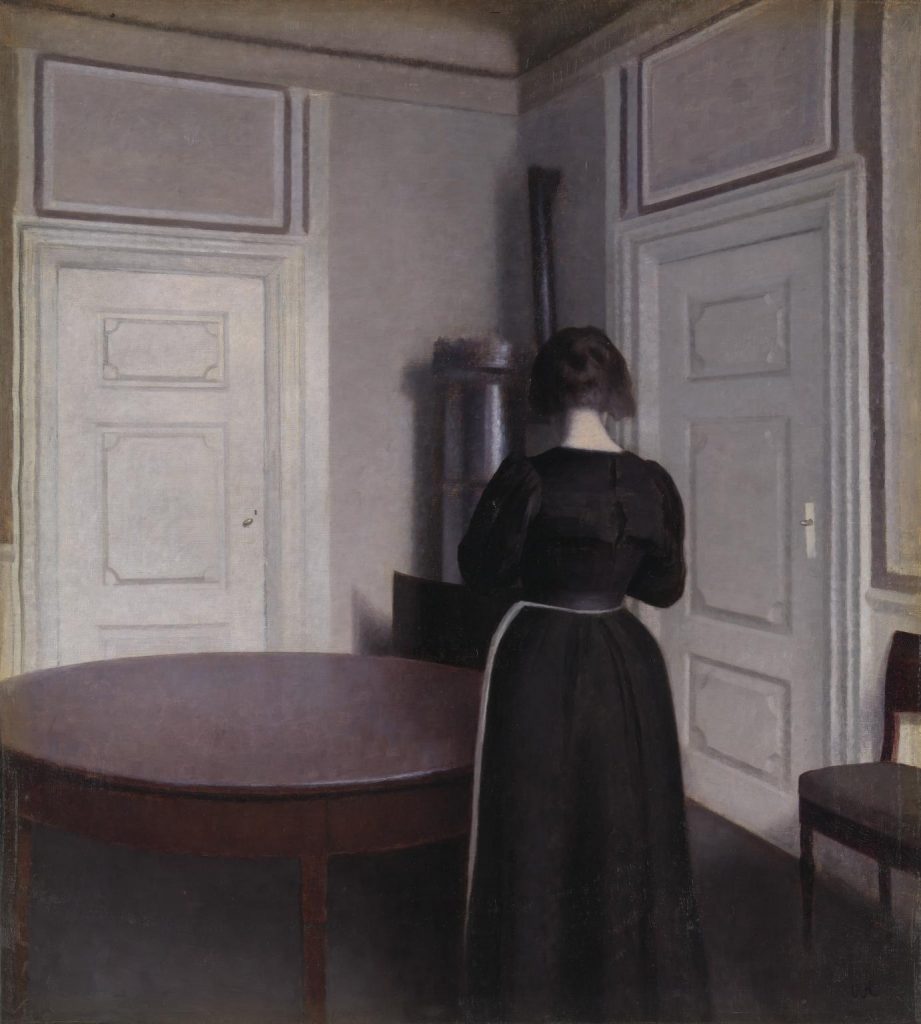 A civilization, like the human body, can live for a long time with a fatal disease, before it finally kills it. We should not assume that our civilization was perfectly fine in the recent past just because it didn’t have diversity and pride parades. Even though it was majority white, it was already suffering from the deadly spiritual illness that would bring it to its current state. The best Canadian art was clearly not the best art for Canada in the long run. Once we all understand what was plaguing Canada’s art, we will be able to free ourselves from this spiritual malaise and the elite that embraces it, and produce better and more inspiring art in the future.