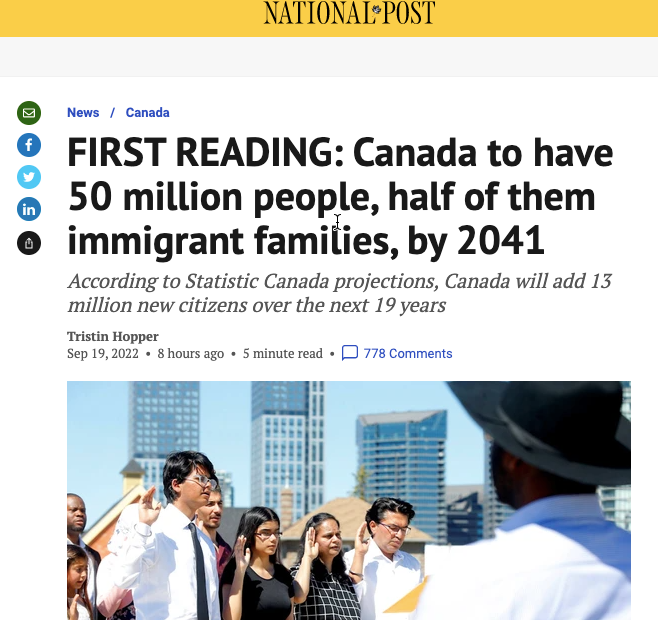 A shocking new Statistics Canada document is being circulated online projecting dramatic changes in the Canadian population by 2041: let’s examine. 1/8 By 2041, 13 million more immigrants will bring the population to 50 million (52.4% of immigrant origin).

The proportion born abroad (as opposed to descendants) will be 29.1% to 34%, the highest proportion since Confederation in 1867. 1 in 4 ‘Canadians’ will be born in Asia or Africa.

By 2041, the proportion of racialized/non-white ‘Canadians’ will rise to 2/5 of the total. A breakdown by age groups reveals that this rises to nearly 50% among those younger than 64.

Stats Can projects a huge increase in the African population in Canada, which could reach 3 million and actually surpass the Chinese population.

Immigrants will continue to concentrate in the major metropolitan areas of Vancouver, Toronto, and Montreal. In Toronto, 4/5 will be of immigrant origin (image 1). Despite this concentration, the growth of the non-white population will be felt across the country (image 2).

Thankfully Québec, the Atlantic provinces, and rural areas in general will fall well below the 2041 non-white average of 41%, remaining culturally and ethnically European. Their demographic weight, on the other hand, will be much diminished.

We at the Council of European Canadians have been warning of this Great Replacement for years, and yet we continue to be called conspiracy theorists. We will continue to force the issue. The upside is that even the National Post is now forced to cover it.