Up the Down Rainbow Staircase 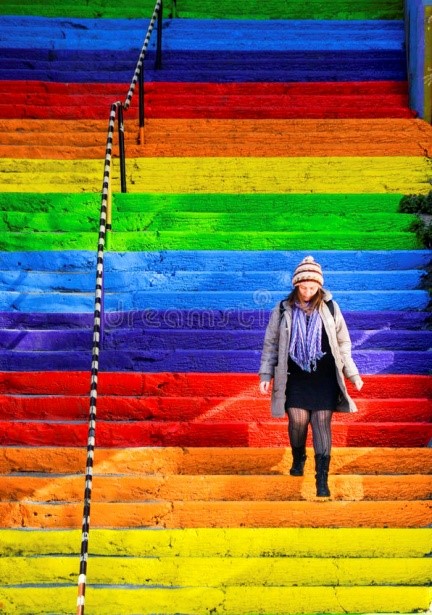 Our local Primary school, serving a community of 2500, has recently painted the outdoor cement staircase that leads up from the school to the playground and soccer field. Each tread is painted in one of the colours that make up the rainbow flag.

This change is the culmination of a long program to inculcate and promote transgender ideology, all in the guise of promoting “inclusion” and countering “bullying”. The idea is to indicate that the school affords a “safe place” to LGBTQ+ whose numbers are perhaps negligible.  In the service of this cause each and every Thursday when school is in session has been designated “Rainbow Day”. Presumably other days of the week have been set aside for actual instruction in grammar and math, but some parents have expressed scepticism in that regard. A few of my acquaintance have even pulled their children out of class in protest, but obviously they have failed to grasp that literacy is a trivial pursuit relative to the importance of encouraging kids to explore their gender identities.

The root cause is not animosity to obese kids or slow kids or nerdy kids or gender dysphoric kids, but animosity toward difference, and the tendency to enhance self-esteem or gain group approval by harassing school mates who don’t fit the mould. Children must understand that you can’t build yourself up by taking someone else down.  A child that feels worthy does not need to put other kids down.

An anti-bullying campaign should not be a campaign to support the LGBTQ+ agenda, or the agenda of any interest group. It should not be a Trojan horse for subjecting children to a lab experiment or turning schools into boot camps of social engineering.

For me, that painted staircase was highly provocative. An in-your-face statement that the forces of darkness have achieved victory. The message is that teachers, not parents, have custody of children. Teachers and school boards can shape your kids and indoctrinate them and there is not a damn thing you can do about it. Homeschooling is the only option, but how many parents can do that? And if it became prevalent, is there any doubt that the state would prohibit it, as in Germany? It should be apparent that totalitarians by definition will not be content to leave any private sphere of life alone or intact. Neither children nor their parents should be left to their own devices. So what is to be done? Reclaim school boards? Smash teachers’ unions, the bastions of cultural Marxists and control freaks? Good luck with that.

One could, of course, paint over the staircase, but the media would have a hay day. It would be framed as “hate speech”, and a rallying for architects of this social engineering.

The truth of the matter is that the “haters” are school board members and politicians and academics who push transgenderism. They hate the family. And the biggest victims of “bullying” are the vast majority of citizens who are made to play along with this whole business. Telling citizens that if they will be fined and/or jailed for “misgendering” a trans person, for refusing to say something they don’t believe is bullying of the highest order.

How in the world did we, as a society, let this happen?

And who will stop it?

Meanwhile, a Pride day was recently held at the local Saturday market.  Superimposed on the rainbow flag that greeted entrants was a statement meant to proclaim our small community’s motto:

“Everyone is welcome here”

Everyone, except of course, the transphobes and the unvaccinated, who according to a candidate currently running for local office, should be either forcibly jabbed at their doorstep or expelled from the community. That’s exactly the kind of response the late Marxist guru Herbert Marcuse prescribed a half century ago. Marcuse called it “repressive tolerance”. A masterpiece of double-speak so typical of the Frankfurt School.

You gotta hand it to them. They cooked up a strategy in the late 1920s  and it worked. They embarked on a Long March through Western institutions and they have reached their destination: Chaos.