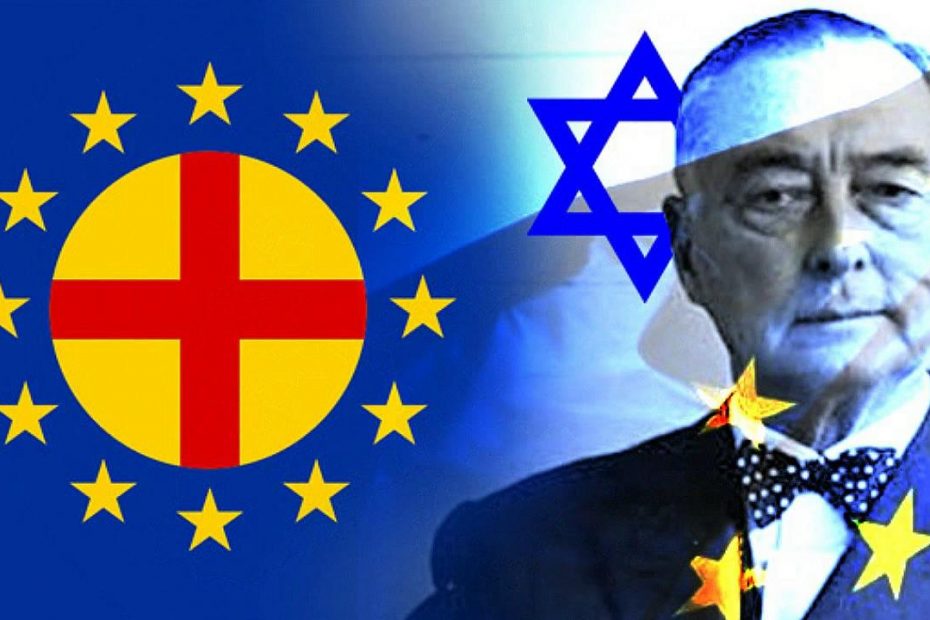 A unified world behind a single global government was envisioned by Winston Churchill’s mentor, the Jewish Professor Frederick Lindemann (1886-1957). He claimed that a small elite would one day rule the world and that “a society governed by supermen and served by helots would be more stable.” (1) He also believed that science would eventually produce a race of men with the “mental characteristics of worker bees.” (2)

We are not quite there yet, but with transhumanism, this possibility is no longer a fiction. With the help of genetic engineering, we will soon be able to change the configuration of genes à la carte. If you want a “worker bee,” nothing could be simpler: cut the nucleotides from the DNA codons involved in these features and replace them with the appropriate synthetic nucleotides.

For unrestricted trade to take place in the proposed New World Order, borders will have to disappear. The “worker bees” will that way be able to move unhindered wherever they are needed. Trade and all other transactions will be greatly facilitated by the elimination of all barriers, not only physical but psychological, and social. This step is now being taken on both sides of the Atlantic.

As far as race is concerned, Count Richard Coudenhove-Kalergi, the founder and President for 49 years of the Pan-European Union, the forerunner of the European Union, says the following:

The man of the future will be mixed-race… The races and classes of today will gradually disappear due to the elimination of space, time, and prejudice… The Eurasian-Negroid race of the future, similar in appearance to the Ancient Egyptians, will replace the diversity of peoples and the diversity of individuals… Russian Bolshevism constitutes a decisive step towards this purpose, where a small group of Communist spiritual aristocrats govern the country… Jewry surpasses all other people in percentage of important men… with Trotsky as the frontrunner of modern politics… The prominent position held by Jews these days is owed to their spiritual supremacy… Modern anti-Semitism is one of the many reactionary phenomena of the mediocre against the superior. (3)

In 1950, the Count was awarded the first Charlemagne prize for work done in the service of European unification. Other winners of the award have included, Winston Churchill, Henry Kissinger, Edward Heath, Bill Clinton, and Tony Blair.

To achieve this, representative democracy will have to be destroyed. Unelected technocrats will rule the world according to the model of the European Union. (4) There will be three levels of governance, a planetary level, probably located in Jerusalem, the future capital of the world (5), a regional level, and a local level at the neighborhood level.

This project has an essentially Malthusian aspect. According to the German reference in climatology, Hans Joachim Schellnhuber, the planet’s carrying capacity is estimated at one billion; but “we can do much better,” enthused Mr. Schellnhuber in 2009 during the Copenhagen Conference organized by him and Prince Charles. (6)

How we are going to go about “doing much better” is not very clear at the moment. The “conspiracists” talk about chemical sterilization, generalized contraception, systematic abortion, radical feminism, homosexuality, transgenderism, importation of hostile third-world immigrants, multiculturalism, forced race mixing by deceitful propaganda, and even genetic manipulation through compulsory vaccination.

This Malthusian objective, “highly philanthropic in nature,” according to Luc Ferry’s ironic word, is the Dada of the most renowned radical ecologists like James Lovelock, William Aiken, Arne Ness and Hans Jonas. In a collective work published under the direction of the late Tom Regan, William Aiken, for example, wonders whether massive human mortality would be a good thing: “Is it the duty of our species towards our environment to eliminate 90% of our numbers?” Of course it is! Aiken thought that the ideal population of the planet would be 100 million. (8)

The Concentration Camps of the Future

The countryside will be emptied of its population and the inhabitants will be crammed into so-called “intelligent” cities where it will be easy to monitor and manipulate them. Domestic surveillance and control are key elements of the 2030 Agenda and the Great Reset.

The combination of artificial intelligence, the Internet of Things, and sensors, as well as wearable technology, will allow for the monitoring of the helots’ every move. (9)

The technocratic era implies the gradual emergence of a more controlled society. An elite free of traditional values will rule over such a society. It will soon be possible to continuously monitor almost all citizens, and to keep up-to-date files on them containing their most personal information. These files will be made available to the authorities instantly. (10)

In the spaces reserved for “worker bees” as is already the case in Cuba, without the technology, everything will be rationed: energy, food, water, children, land use, absolutely everything. Your carbon footprint, the toxicity of all the ingredients you consume and your impact on biodiversity will be closely monitored. (11)

Sensors implanted in your body will track every move you make. No one will be free to come and go outside the controlled areas. (12)

Good conduct reports will be issued to every citizen. You will have access to certain benefits only according to your accumulated social credits. Tattling will be encouraged in exchange for good points. (13)

As far as food is concerned, you will not be spoiled, as Bill Gates, one of the main instigators of this ecological tyranny, wants you to eat insects and vegetables fertilized with human excrement. (14)

Private property will be transferred to the state. The “supermen” in power will become owners since they will be masters of the state. They will live in beautiful houses in protected natural parks, which they will reserve for their personal use. (15)

It is mainly for this reason that the financiers at the top of the pyramid have always endorsed planetary communism (socialism). It may seem contradictory that the richest people in the world, having made their fortune through financial capitalism, would want to set up a communist or socialist system, supposedly the antithesis of capitalism. But as W. D. Chalmers says in his book Conspiracy of the Truth: “Under socialism, the state owns everything, and since these people simply intend to own everything, including the state, this is the best way to take over the earth’s goods without being noticed!” (16)

It is also a way for them to make the population believe that a Garden of Eden awaits them like in John Lennon’s cult song Imagine. This would be surprising given the method used and the “diabolical” nature of this hostile elite that has never cared about the fate of the “lower” classes. So it’s a mask, a trick, a decoy to facilitate the establishment of a future totalitarian technocracy led by rich psychopaths who have only their own interests at heart.

The General Councilor of the Grand East, president of the Patriots and former member of the European Union Florian Philippot has summarized the situation well in his book COVID-19: L’Oligarchie démasquée (2020):

If the multi-billionaires like Soros or Gates support the Davos program, it is in the framework of an international alliance with the socialists and the welfare states they control to guarantee their mutual survival. The result should be a complete collectivization of the economy, which will be possible through the digitization of money and the establishment of a global totalitarian state monitoring each individual in real time. The billionaires will economically control the system thanks to technological giga monopolies granted by the neo-communist states, while the workers under surveillance will be dependent on social programs such as the Universal Income, called in France “socle citoyen.”

This is the Sparta model. Contrary to popular belief, Sparta was a proto communist society where money did not exist. It was ruled by a small elite reigning over a vast mass of peasant slaves who were not allowed to leave their plot of land. These peasants had to cultivate the land for free for the ruling caste. The population was the property of the state and the Spartans, as masters of the state, had the usufruct of this property, i.e. the use of slaves.

The USSR did not function differently, and if Agenda 2030 is implemented in the West, we will become helots, as in Sparta, or slaves of kolkhozes, as in the USSR. There will be no more private property, except for the nomenklatura. Everything will be “free” except for one detail: the standard of living will be divided by at least two.

Many people have not understood what is going on and continue to argue about the common cold 19 [and the climate, the two are correlated]. It is high time to understand that this imaginary pandemic [as well as this imaginary climate crisis] is only the trigger for a radical reorganization of society by the globalists. What they call, as you know, the Great Reset.

As says Abbot Olivier Rioult, it is therefore a matter of enslaving the whole of humanity “by means of a globalist, materialist, and totalitarian project which temporally benefits a very small minority of Jewish and non-Jewish Mammonites.” (17)