Jagmeet Trudeau: A Merger of Morons 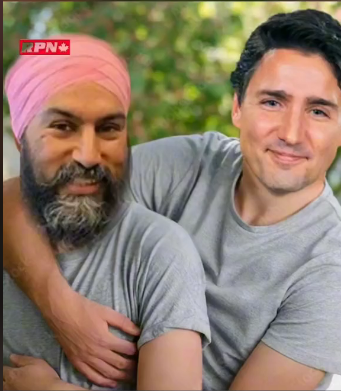 Lovebirds of a feather, Jagmeet Singh and Justin Trudeau are brazenly flocking together, and rumour has it that they are about to take a step further and consummate their relationship. Having formed an alliance some months ago, they now realize that given their close ideological kinship, a coalition would be more efficient. A coalition of parties– and party leaders. A Merger of Morons.

From whom will issue the zygote or the egg is not yet known. All that is certain is that a new being will emerge from one them. Like Rosemary’s Baby, swathed in pink.

How exciting. Soon two hearts will beat as one, in one body. Think of it. One body. One face. A new Superman. Or Super-something . A genetically engineered hybrid of the very best that East and West can bring to the table.

Ladies and Gentlemen (and those in between) I give you… 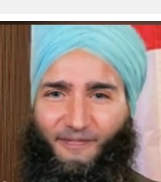 The Turbanator of Constitutional Rights and Freedoms
A Tyrant for the ages!

This Transhuman Frankenstein, this product of cynical opportunism and expediency, represents a potent mixture of arrogance, superficiality and mock outrage. It was not a difficult procedure. The fusion of egos was seamless, as they were so alike that they could have been mistaken as twins if not for their contrasting hair styles. The only difference was that Justin was a phony and Jagmeet was a fakir. Both were masters of virtue-speak and barf-bag buzzwords like ‘inclusive’, ‘tolerant’, ‘diverse’ and ‘resilient’, clichés devoid of meaning. Both posed as champions of ordinary people, except of course, ordinary people. Truckers for example.

Ever since their sordid political arrangement was made public, those who thought that they voted for the NDP now understand in retrospect that they were actually voting Liberal. A vote for the NDP is a proxy vote for the Liberals. So next time they might very well decide to vote Liberal. I mean, why not? No sense in splitting the totalitarian vote, is there?

Meanwhile the Leftist Lovebirds will have ample time to legislate their Orwellian agenda before the metamorphosis has been completed. When Bill C 11 passes, it’s a done deal. In case you haven’t heard, that is, in case you rely on the CBC for news, that’s the Bill that when passed, will permit a CRTC Commissar to pick what Internet content gets moved to the top of the search menu and what content is buried on page 46. Use your imagination about what kind of stuff that would be. You’ll have to because so far they haven’t spelled out what the criteria they will use to make that determination. Too often the right to freedom of speech is conceived as a right for speakers. But it is equally important that citizens have the right to read or hear or watch what a speaker or writer or artist has to say or present. Consumers should not be hindered from viewing or listening to what they want. Shadow-banning content by relegating it to obscurity robs consumers of easy access to that content. As if the existing censorship noose in Canada needs any further tightening.

By the time the Jag-Justin merger is complete, Canada will be a fully fledged post-national, soft totalitarian state where all heretical opinions and politically inconvenient facts judged “harmful misinformation” will be censored or buried—and media compliance secured through continuing taxpayer subsidies.

Oh, and they’ll confiscate your gun just in case you get the wrong-headed idea that this Red-Orange Frankenstein is a threat to democracy and freedom.