Oil is everything. That is to say, everything in the modern world is dependent on oil and other hydrocarbons. From these we get fuel, fertilizer, pesticides, lubricants,  plastic, paint, synthetic fabrics, asphalt, pharmaceuticals, and many other things. On a more abstract level, we are dependent on these fossil fuels for manufacturing, for transportation, for agriculture, for mining, and for electricity. When oil goes, our entire industrial society will go with it. There will be no means of supporting the billions of people who now live on this planet. Above all, there will be insufficient food.

A good deal of debate has gone on about the “peak,” the date at which the world’s annual oil production will reach (or did reach) its maximum and will begin (or did begin) to decline. (Of course, it is actually extraction; we do not “produce” oil, just as dentists do not “produce” teeth.) According to BP, it is almost certain that the global peak of oil supply was in the year 2018. Actually Jean Laherrère had already predicted the event in very much the same manner, seven years earlier. He describes what he calls a “bumpy plateau” from about 2010 to 2018, followed for the rest of the century by an irreversible decline. BP and Laherrère also both predict that annual production will drop to about half the present level around 2040 or 2045.

In 1850, before commercial production began, there may have been 2 trillion barrels of usable, recoverable oil in the ground. By about the year 2010, roughly half of that oil had been consumed, but perhaps as much as 1 trillion barrels remain. A trillion may sound like a great deal, but is not really so impressive in terms of how long it will last. At the moment about 35 billion barrels of oil are produced annually, and that is probably very close to the maximum that will ever be possible. When newspapers announce the discovery of a deposit of a billion barrels, readers are no doubt amazed, but they are not told that such a find is only two weeks’ supply. Many press releases, particularly about “unconventional oil,” are just thinly disguised advertising, designed to lure gullible investors into supporting projects that will have large expenses but small profits.

Coal and natural gas are also not as plentiful as before. Coal will be available for a while after oil is gone, although previous reports of its abundance were highly exaggerated. Coal, however, is highly polluting and cannot be used as a fuel for most forms of transportation. In addition, coal mining requires large amounts of oil (mostly in the form of diesel fuel) and electricity. As for natural gas, it is not easily transported, it is not suitable for most equipment, and again it is a fossil fuel less abundant than often claimed to be, even with hydraulic fracturing of shale.

In terms of its effects on daily human life, the most significant aspect of fossil-fuel depletion will be the lack of food. “Peak oil” basically means “peak food.” Modern agriculture is highly dependent on fossil fuels for fertilizers (the Haber-Bosch process combines natural gas with atmospheric nitrogen to produce nitrogen fertilizer), pesticides, and the operation of machines for irrigation, harvesting, processing, and transportation. Without fossil fuels, modern methods of food production will disappear, and crop yields will be far less than at present. We should therefore have no illusions that several billion humans can be fed by “organic gardening” or anything else of that nature. 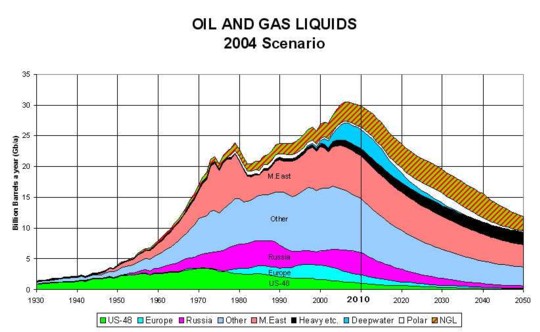 For several reasons, alternative sources of energy will never be very useful, but mainly because of a problem of “net energy”: the amount of energy output is not sufficiently greater than the amount of energy input. With the problematic exception of uranium, alternative sources ultimately don’t have enough “bang” to replace the 35 billion barrels of oil we use annually – or even to replace more than the tiniest fraction of that amount.

At the same time, alternative forms of energy are so dependent on the very petroleum that they are intended to replace that the use of them is largely self-defeating and irrational. Petroleum is required to produce, process, and transport almost any other form of energy; a coal mine is not operated by coal-powered equipment. It takes “oil energy” to make “alternative energy.” Alternative energy, in other words, is always riding on the back of a vast fossil-fuel civilization.

The use of unconventional oil (shale deposits, tar sands, heavy oil) poses several problems besides that of net energy. Large quantities of natural gas and water are needed to process the oil from these unconventional sources. The pollution problems are considerable, and it is not certain how much environmental damage the human race is willing to endure. With unconventional oil we are, almost literally, scraping the bottom of the barrel.

More-exotic forms of alternative energy are plagued with even greater problems. Fuel cells cannot be made practical because such devices require hydrogen obtained by the use of fossil fuels (coal or natural gas), if we exclude designs that will never escape the realm of science fiction; if fuel cells ever became popular, the fossil fuels they require would be consumed even faster than they are now. Biomass energy(from corn or wood, for example) requires impossibly large amounts of land and still results in insufficient quantities of net energy, perhaps even negative quantities. Wind and geothermal power are only effective in certain areas and for certain purposes. Hydroelectric dams are reaching their practical limits. Nuclear power will soon be suffering from a lack of fuel and is already creating serious environmental dangers.

The current favourite for alternative energy is solar power, but it has no practicality on a large scale. There is a great deal of solar energy reaching the Earth, but it is too diffuse to be of much value. A good analogy to that diffusiveness, and in fact a somewhat related problem, is that metals have been of use to mankind only because they were found in concentrated deposits. Proponents of solar energy must therefore close their eyes to all questions of scale.

The quest for alternative sources of energy is not merely illusory; it is actually harmful. By daydreaming of a noiseless and odorless utopia of windmills and solar panels, we are reducing the effectiveness of whatever serious information is now being published. When news articles claim that there are simple painless solutions to the oil crisis, the reader’s response is not awareness but drowsiness. We are rapidly heading toward the greatest disaster in history, but we are indulging in escapist fantasies. All talk of alternative energy is just a way of evading the real issue: that the end of the Industrial Age is in sight.