The Killer Dog Problem: How the Globalists in Power are Transposing on Pit Bulls their Bogus Notions on Race and Behaviour 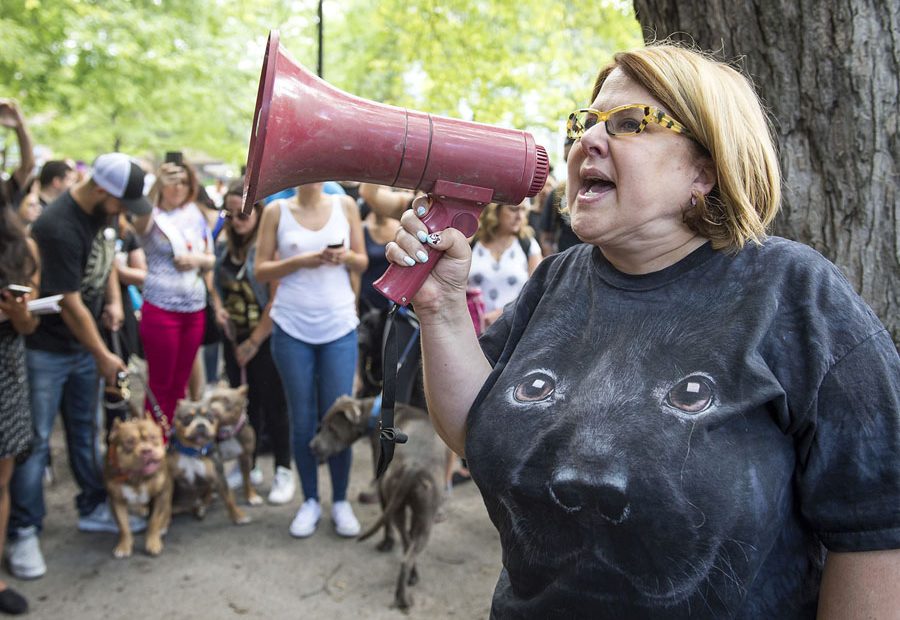 Going to the root of things is always a good idea if you really intend to change things.

We use derogatory words to identify a certain subgroup of dogs which does not form a ‘race.’ Like blacks, Latinos, Arabs… these aren’t races. Just like there is only one race, the race of human beings, there is only one ‘race’ of dogs, it’s called dog: canis lupus familiaris (1).

Not so, Ms. Goldwater. The dog is in fact a domesticated subspecies of the wolf, itself divided into more than 450 breeds (races in humans) or variants, easily identified by their morphology (phenotype) and able to predictably produce offspring true to type. No one has ever seen a couple of registered pit bulls like the american staffordshire terrier produce a litter of poodles.

Breeds in dogs, just like races in humans (2)(3), are an inescapable reality, and this reality is not limited to appearances, but also concerns behaviour (4)(5)(6).

People often say: “there are no bad dogs, but only bad masters.” Bill Bruce, for example, the author of the current canine municipal regulations of the city of Calgary, is a staunch believer of the above saying as the following quote demonstrates: “We believe that canine aggression is essentially a human problem, and if we solve the problem at its source, the canine problem will resolve by itself.” (7)

This is in fact, the solution that was recently adopted by our present liberal government: more surveillance and the obligation by dog owners to keep their pets on a leash, but without a muzzle, in the case of pit bulls. In other words, since breeds and behaviour have no biological (hereditary) basis, it would be unjust to discriminate against one or another canine.

But would it really be unjust? Of course not! As most honest breeders, agronomists, and veterinarians can tell you, genes play an important role in aggressiveness, even if the acquired or training aspect of behaviour also matters. (8) All dogs are not born equal. The favorite saying of the pro pit bull advocates, copy-pasted from Jean Jacques Rousseau’s preposterous theory of the noble savage, “there are no bad dogs, but only bad masters,” is completely untrue. Depending on the breed and purpose, breeders will select at birth or shortly after, the most docile specimens of a litter for company, and the more aggressive ones, for protection or combat. The others are sold for reproduction to a puppy mil or simply culled.

Does this mean that all pit bull dogs are dangerous? Of course not. An undetermined number is not (see below). But since there is presently no test for effectively separating the wheat from the chaff, it would be safer to banish them all together. These born killers have a very heavy genetic past. They were made by mating extremely aggressive breeds that were selected for thousands of generations for their gameness, strength, overdeveloped predator instinct, high pain threshold, and impulsiveness. These factors combined with the incredible power of their jaws cause extremely serious injuries. Furthermore, pit bull attacks are by definition unpredictable and incredibly violent.

The most dangerous pit bulls are those that are trained to be aggressive by mostly ill-reputed individuals, such as drug dealers or gang members or even ordinary persons who like to scare or intimidate others. Although law prohibits them, dogfights still occur and dogs are still bred for this purpose. Only the most aggressive dogs are used while the other less performing subjects are sold on the market where there is a high demand for pit bulls. Others are sold to breeders, both black market and legal, where they are reproduced cheap by the dozens without any consideration for their behaviour traits as long as they are true to type. Unsuspecting clients end up buying these Jekyll and Hyde’s without knowing where they come from. Many of these dogs are quite innocent looking until the day they change without warning into the monsters they really are.

In the province of Quebec, according to the findings of the Working Committee on the Supervision of Dangerous Dogs, statistics on dog bites are a real black hole for the following reasons:

Indeed, without knowing the population of each breed, the number of bites as well as the breed involved, it is almost impossible to find out precisely which breeds are the most dangerous. This lack of statistics might be good for business but it is also a flagrant flight from responsibility as well as a denial of breed reality and the importance of biology in behaviour.

The Case of Toronto

Fortunately, the situation is quite different in Toronto where the data on dogs is sufficiently large and precise to get a good idea of the scope of the problem (see table below). It turns out, all pit bull type dogs, pure bred and mixes alike are the most dangerous. Is this the reason why pit bulls and other dangerous breeds were successfully banned from Toronto in 2005? No doubt about it. 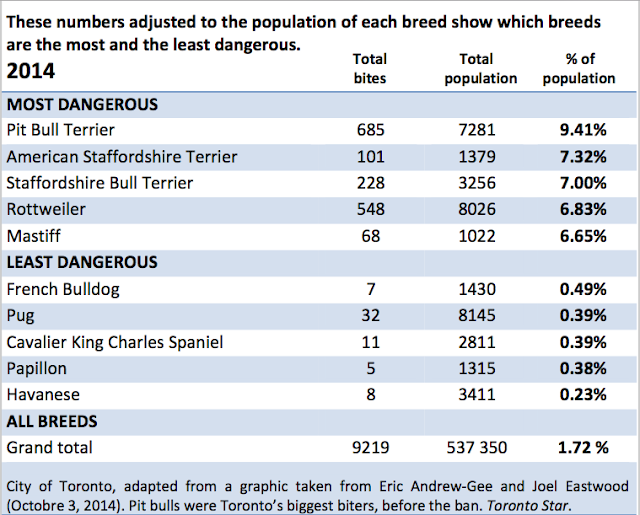 Another way of knowing what’s going on is to consult the medical and surgery journals. For the last 40 years or so all serious epidemiological studies – i.e. those that are not made by vets or sponsored by humanitarian societies and pro-pit bull associations  – are unanimous: In North America, the majority of dog bites requiring hospitalization or resulting in death are inflicted by pit bull type dogs. (9) (10) (11) (12) (13) (14) (15) (16) (17) (18)

Pseudoscience is their creed

According to pro pit bull advocates, all their claims on breeds and behavior are based on sound science. But nothing is further from the truth. None of their allegations are scientifically documented by credible studies. Morally abusive authorities are the sole support to these claims. This is why advocates will viciously attack anyone who questions their sacred beliefs.

In spite of their small number compared to other popular breeds such as the Labrador, the Golden Retriever, and the German Shepard, pit bulls and related breeds are responsible for a disproportionate number of serious dog attacks. It would therefore be a good thing to fade them out from the market.

Knowing all along that regardless of the measures taken, it is impossible to eradicate biting dogs without addressing the root causes such as the false claims of animal-assisted therapy which are fuelling a historically unprecedented demand for pets, veterinary bias, and the outrageous humanization of animals, to name but a few (see on this blog a longer article on the root causes).

It is essential to collect valid data on the population of breeds, the number of attacks, the severity of the bite injury, as well as the breeds responsible. These statistics must be available to the public on demand or posted on a website for all to see. Under the present circumstances, refusing to name the breed of a biter like some mainstream media are doing is outright criminal.

In all fairness, pro-pit bull advocates and our elected liberals need to stop believing that breeds are social constructions and that biology (heredity) plays no role in behaviour. It is not true. These social agents are unable to admit that genes play an important role in behaviour and that breeds are a reality, as this admission would force them to admit that this is true for humans as well. An impossible task, obviously, as these inconvenient truths are totally contrary to the progressive egalitarian ideology inspired by the Marxist cabal that runs their lives. In other words, our authorities are refusing to do the right thing for political and ideological reasons.

In the end, society must choose between lying for business and ideological reasons and telling the truth in order to protect the public.

Breeds do behave according to their genes, but if you mix them up in a dog park for example, they don’t mingle according to their breed because unlike humans they were not artificially selected to recognize their breed as one of their own. Pit bulls in a dog park, for example, will not mingle with pit bulls more than they will mingle with any other breed. In other words, they do not have a special attraction for dogs of their own breed. Dogs are breed-blind. Liberals like pro-pit-bull-advocate, Anne-Marie Goldwater, therefore wrongly assume that if dogs are breed-blind, humans are also race-blind. They forget that humans were naturally selected to recognize those of their breed or race. So if you mix a bunch of people from different races, in a jail or in a high school for instance, they will eventually mingle with those that are genetically similar to them (theory of genetic similarity by Philippe Ruston: people are naturally attracted by people who have similar genes). This is not at all the case for dogs or any other domestic animal of the same species. But wild animals will mingle according to their breed. There are hundred of breeds of ducks, they are all ducks first and foremost but they divide naturally into their respective breeds because of natural selection. The same for humans, unless they are forced to do otherwise by totalitarian types of ideologues like Trudeau and friends.