In 2018, Hammer Bound Apparel began our mission of creating unique and unashamedly pro-Europa apparel for Westernkind identitarians and ethno-nationalists. Our name honors the great Frankish hero of the eighth century who saved Europe from invading colonizers, Charles “The Hammer” Martel.

Producing Europa Inspired Apparel, concepts and art celebrating and encouraging respect for the Occident, is our passion.

The climate of the modern age is one that is feverishly engaged in the undermining and calumniating all things European, masculine and Christian.

Be a heretic in the eyes of  the Christianity-replacing religion of “tolerance”, “diversity” and “inclusion”. Restoring pride and honor in the history and uniqueness of our people is a God-given right against which no man can rightfully object.

Hammer Bound puts a strong emphasis on Pan-European unity, in a spirit that is respectful of the sovereignty, self-determination and national identity of the cornucopia of distinct European nations.

As a people, European-folk must rediscover their in-group preferences, this being the natural and healthy inclination for every peoples on Earth to ensure their best interests. It is within the true Christian spirit to fight for one’s kinfolk, rejecting the modern forced-indifference towards our identity. Pretending away the importance of our history, culture, heritage and tradition is no virtue at all.

We are proud to announce our eighth release of Europa inspired concepts. Here are the new unique t-shirts, available in various colors, of our Fearless Collection:

Our Europa inspired themes would not be complete without the presence of Charlemagne who has been dubbed the Father Of Europe.

Being the grandson of our hero Charles “The Hammer” Martel, he was of royal Frankish blood and is without a doubt an integral vein in the European family tree. He was King of the Franks, King of the Lombards and Holy Roman Emperor and is connected to every royal European house that came after him. During the early Middle Ages, Christendom continued to expand as Charlemagne united the majority of Western and Central Europe. His reign stimulated the economy across the continent and fostered a cultural renaissance.

When it comes to protection of kings, emperors and popes, it takes a special caliber of soldier to fit the bill. Three such examples of this elite class were the Praetorian, Varangian and Swiss Guards.

Over the centuries, many elite military forces were modeled after the Praetorian Guard. Wielding the discipline that became synonymous with the Roman army, the best of the legionaries would qualify to be part of the Guard. These men served as the personal protectors of the Western Roman emperor.

The Varangian Guard were Norse, and later Anglo-Saxon, mercenaries in service of the emperor of Byzantium, the Eastern Roman Empire. Originally hailing from Scandinavia and the Kievan Rus’, they were known for their honor, loyalty and fearlessness.

Established in 1506, the Swiss Guard, charged with the defense of the Bishop of Rome, is the world’s oldest standing army. Swiss mercenaries during the early 16th century had a reputation of ferocity and loyalty, which lead to the formation of this personal Bodyguard regiment of the pope.

…Your culture, building and growing forth from the cultures of our ancestors.

…The traditions which find establishment through the deeds and actions of those forebears that laid the groundwork. 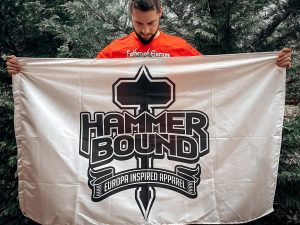 …The heritage which is a common thread shared by all Europa which should ever inspire a rejection of fratricide and encourage respect and embracement amongst cousins and brothers.

These are the Ties That Bind!

Wherever Europa has trod, the unfolding of the story of Western Civilization has been written. With ever-adventuring spirit to North, East, South and West, on all the continents and even into the skies, European-folk have forged a history of toil, performance and handiwork that is worth admiration.

This We’ll Defend has been the motto of the United States Army since first used by our colonial forefathers in 1778 during the American War of Independence.

The fruits of our Civilization, often neglected or taken for granted, is the foundation of freedom, innovation and prosperity that we enjoy. Our Civilization is our ancestral inheritance and, as is our lofty duty, This We’ll Defend!

The Winged Hussars were a Polish shock cavalry unit active in the 16th through 18th centuries.

These Catholic warriors, nicknamed the ‘Angels of Death’, are often considered the greatest cavalrymen in history. They rarely saw defeat and most of their victories were won whilst being dramatically outnumbered.

In 1683 at the Battle of Vienna, the Angels of Death were immortalized due to their spearheading the largest cavalry charge of all time. This united force of Polish, Austrian and German horsemen charged the lines of the invading Ottomans, and gloriously thwarted their siege on Europe.

The motto of these esteemed guardians was Amor Patriae Nostra Lex, Love of the fatherland is our law!

It is imperative that cooperation and mutual support amongst nationalists become embedded in the collective worldview of the “movement” to resuscitate the West. Hammer Bound is based in the United States and we encountered this open-mindedness when we reached out to Ricardo Duchesne about advertising on the Council of European Canadians. As a special exclusive for our Canadian brothers to the North, we extend a 10% off coupon code for the CEC community: “CEC10”

Entering the culture is necessary for spreading appeal to a wider public and enhancing morale. With dozens of fantastic t-shirts to choose from, share your love for your people and the celebration of Western Civilization with the world!