The Birth and Development of Chemistry Was Perfectly European 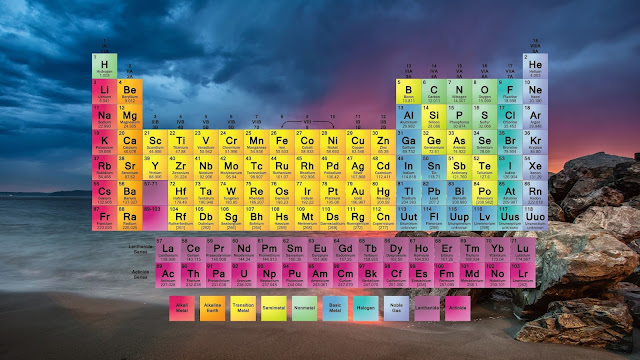 Chemistry is a relatively young field, becoming a science between the seventeenth and eighteenth centuries. One can’t speak of a “science” unless it is a discipline with “its own concepts, its own techniques, and its own applicability” (Hall, p. 303). Whereas sixteenth century physics (mechanics/astronomy) was a “highly organized, mathematically sophisticated, theoretical science” (Rossi, p. 139), with a long line of great scientists going back to ancient times and the Renaissance, backed by figures like Euclid, Archimedes, Ptolemy, and Copernicus, modern chemists were preceded by alchemists, druggists, iatrochemists, and sorcerers. It was only during Robert Boyle’s (1627-91) generation that chemistry started to become conscious of its own distinctive field of study with its own specialized concepts.

Some believe that chemistry came into the light only when the investigation of gases proceeded rapidly in the hands of Henry Cavendish (1731-1810), the theologian Joseph Priestley (1733-1804) and Carl Scheele (1742-1786), when chemists came to see that air was an active ingredient in chemical reactions and not the only sort of gas; when Joseph Black showed in the 1750s that “fixed air” (CO2) was distinguishable from normal air, and when Antoine Lavoisier’s oxygen theory of combustion was confirmed in 1772, and his book, Traité élémentaire de chimie, was published in 1789, the first modern chemical textbook with a new nomenclature, in which precise terms came to identify the nature of the substances, with hydrogen, for example, replacing the vague term “inflammable air, and oxygen replacing Priestley’s “eminently respirable air” term. 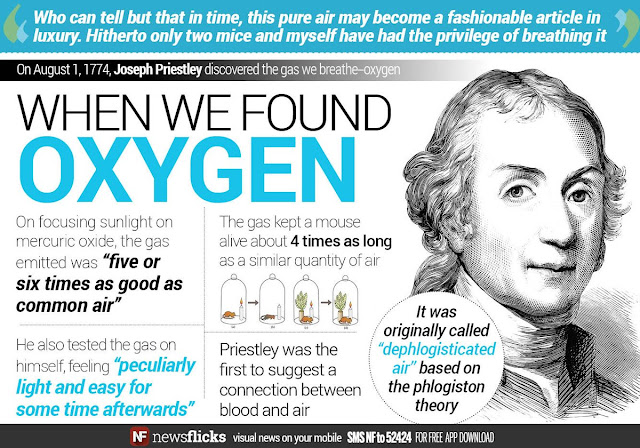 It was then, some argue, that a new scientific paradigm emerged in the study of matter deserving the name of chemistry. Today we can say that chemistry is the science that studies the properties and behavior of matter, or the way the atoms and molecules that make up the ultimate elements of nature interact and adopt new combinations to create compounds.

It would be a mistake, then, to have headlines about “Chemistry in the Ancient World” or “Alchemy and the Birth of Chemical Science,” as books on the history of chemistry, or chemistry books for high school students, are increasingly doing to be more “inclusive” of non-European “contributions”. The science of chemistry was developed entirely by European men. This does not mean that researchers in mineralogy, pharmacology and alchemy did not play a significant role in the eventual development of chemistry. A.R. Hall, in his classic book, The Scientific Revolution, 1500-1800: the Formation of the Modern Scientific Attitude (first published in 1954), goes too far claiming that “it is almost useless to look to them [the alchemists] for the beginnings of a chemical attitude” (p. 307). It is true that alchemists had no criteria for distinguishing factual knowledge “from the products of their own extravagant imaginations” and believed they were searching for the ultimate elixir, an alchemical substance capable of turning base metals like mercury into gold, or affording immortality to humans. Everywhere in their writings there were invisible forces, vital agents, mysterious spirits inside matter.

Yet, in fairness, alchemists did explore and greatly expand our knowledge of substances and their reactions, including the Islamic alchemist Jabir ibn Hayyan (721-815), who identified two elements, sulphur and mercury, and synthesized ammonium chloride. It may be an exaggeration to say that Paracelsus (1493-1541), a Swiss physician, took alchemy “on the road to becoming chemistry,” but he did forge a new field, iatrochemistry, which endeavored to unite medicine with chemistry; and he offered descriptions of the properties of mercury, zinc, cobalt, potassium and other metals. The nobleman from Brussels, John Baptist van Helmont (1580-1644), despite his believe in vital animistic forces in matter, developed iatrochemistry in a more quantitative direction, adopted the theory of void space, and advanced an explanation of digestion as the action of acid as an agent in the transformation of foods.

Hall is far more sympathetic to the “empirical knowledge of the phenomena of chemistry” rooted in glass-making, the metallurgical industry of smelting and refining of metals, the pharmacological preparation of medicaments and the discovery of alcohol, including the differentiation of saltpetre from soda (which made gunpowder possible) — knowledge which emanated from a Hellenistic tradition centered in Alexandria, and from India, China and the Islamic peoples. The mineralogical and pharmacological  knowledge of the Chinese, as Joseph Needham has documented, was considerable, their distinction between saltpetre, alum, and their knowhow in tanning, dyeing, painting and fire-work-making, but this scattered knowledge was descriptive and for practical uses, unguided by any scientific principles. It would also be a mistake to say that the origins of chemistry are to be found in the ancient Greek idea that everything on earth was made up of four foundational elements (earth, water, fire, and air) or that indivisible particles “generate all composite things”. 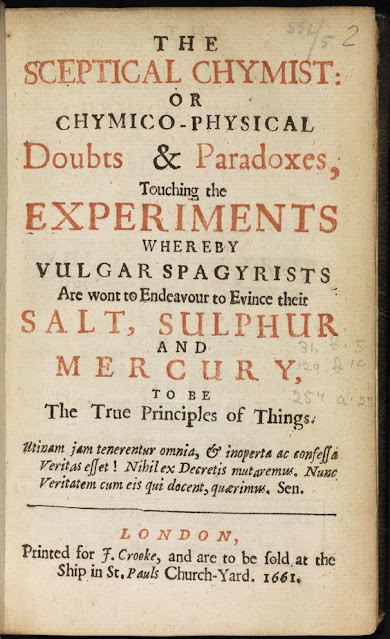 Perhaps the best candidate to represent the beginnings of the science of chemistry is the Anglo-Irish Robert Boyle. Boyle, a devout Anglican who sponsored missionary activities and wrote theological treatises, was a prominent figure in the articulation of the modern science of mechanics, with its idea that natural phenomena operated according to mechanical laws. He actually sought to integrate chemistry with physics as the two sciences that are seeking to explain the properties of matter. His book The Sceptical Chymist (1661) attacked the ancient doctrine of the four elements, proposed a clear definition of element as a “perfectly unmingled body, which not being made of other bodies…are the ingredients of which…mixt bodies are immediately compounded” — which anticipated the modern theory of molecules and atoms. He is known for his famous “Boyle’s law” which states that there is an inverse relationship between pressure and volume of gas, and for promoting the idea that air played a vital part in combustion.  From this point on, there is a consensus among historians that the following names were critical in the consolidation of the science of chemistry: G. E. Stahl (1660-1734), Cavendish, Priestly, Black, and Lavoisier.

Once Lavoisier, who was raised in a pious Catholic family, set chemistry on a firm scientific footing, and established a good working definition of an element as a substance that cannot be broken into more fundamental constituents, it was a matter of time before new elements would be discovered. Don’t believe the incredibly deceptive Wikipedia claims about how the elements of gold, iron, copper, lead, silver, and tin were discovered in the ancient Middle East and Africa. These metals were used but not consciously discovered as chemical “elements”. It was only as the science of chemistry came into its own that elements came to be progressively discovered. Phosphorus in 1669, cobalt in 1735, nickel in 1751, magnesium in 1755, hydrogen in 1766, oxygen in 1771, nitrogen in 1772 — by European names.

The big question in chemistry soon became how to classify the elements. This effort led to the development of the Periodic Table, one of the greatest scientific accomplishments in human history. John Dalton, teacher at a Quaker boarding school, played a crucial role in the classification of elements with the publication of his book, A New System of Chemical Philosophy (1808), with its observations that the atoms of different elements differed in size, weight and number per unit volume, and that when two elements combined to form a compound each atom of the first element united with one atom of the second element in a series of whole numbers. The studies by Swede Jakob Berzelius (1779-1848) and the Belgian Jean Stas (1813-91) on the atomic weights of the elements, and the law of isomorphism, which allowed Berzelius to determine the formulae of many salts and the atomic weights of their constituent elements, were also important steps in the classification of the elements in a scientifically accurate way. 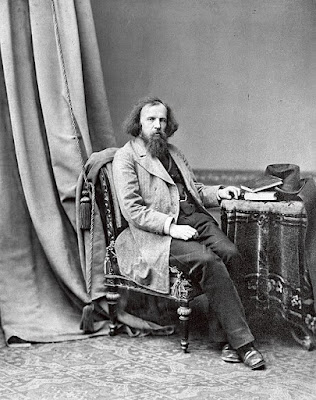 The making of the Periodic Table included an all-European cast, consisting of Johann Wolfgang Döbereiner, John Newlands, Lothar Meyer, and Dimitri Mendeleev. Newlands showed how if the elements were listed in order of atomic weight, each element shared properties with those eight and sixteenth places later. The German Lothar Meyer also noted the sequences of similar chemical and physical properties repeated at periodic intervals. The Russian Mendeleev is the one immortalized for drawing up the Periodic Table in 1869, spelling out systematically how the characteristics of the elements recur at a periodic interval as a function of their atomic weight. Meyer had produced a similar, if less systematic, version of the Table in 1868, but it was Mendeleev who applied himself to the elaboration and defense of his Table, predicting the properties of five unknown elements and what their compounds would be, even before their discovery.

Today the periodic table outlines each element’s electron configuration, the atomic number of the element, and the chemical properties of the element. Many great chemists would come in the late nineteenth and early twentieth century. Sometimes it is difficult to distinguish chemists from physicists. Ernest Rutherford, for example, was awarded the Nobel Prize for chemistry in 1908 “for his investigations into the disintegration of the elements, and the chemistry of radioactive substances” even though he was a physicist who believed that his main contribution was in the pioneering of the nuclear structure of the atom. Marie Curie, on the other hand, a highly gifted chemist, was awarded a Nobel Prize in physics in 1903 for her work on radioactivity.

I could go on listing great chemists by naming Nobel Prize winners during the 20th century. Most of the names are European, though Jews do start winning prizes during the 1970s, a high number in the 1980s, and some afterwards, along with some non-Europeans. Nevertheless the basic thesis of this article stands: Europeans originated the science of chemistry, pioneered all the fundamental ideas, from the seventeenth until the twentieth century, created the research centers and university departments that would transform chemistry into an institutionalized field with thousands of scholars and researchers, working less as individuals than as members of research teams funded in the millions, and making new contributions, but relatively minor, and none in the macro scale of the pioneers listed above.

Herbert Butterfield, “The Postponed Scientific Revolution in Chemistry” in The Origins of Modern Science (The Free Press, 1965).

A.R. Hall, “The Origins of Chemistry” in The Scientific Revolution, 1500-1800: The Formation of the Modern Scientific Attitude (Beacon Press, 1960).

Stephen Mason, “From Alchemy to Medical Chemistry,” “The Phlogiston Theory and the Chemical Revolution,” “Chemistry and the Atomic Theory of Matter” in A History of the Sciences (Collier Books, 1967).

Joel Levy, The Bedside Book of Chemistry: From Molecules to Elements: The Chemistry of Everyday Life (New Burlington Books, 2011).