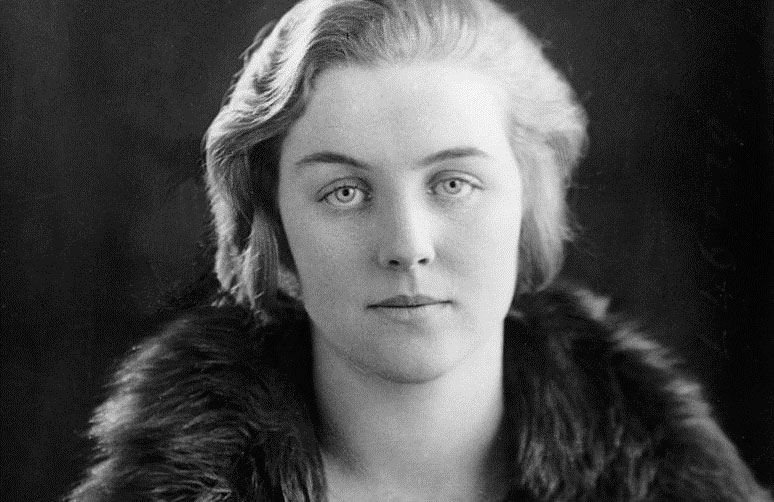 One British Woman, an aristocrat, a free thinker, had a shot at ending WWII before it began, Diana Mosley (nee Freeman-Mitford), one of the six beautiful Mitford girls you may have heard about.

Unity Mitford was far more struck by Adolph Hitler than the others, but Diana was also taken with the German dictator; dined with him, was invited to the Berghof, the Bayreuth Festival and the Olympics by him. The two upper class English girls would sometimes sit on either side of him, blonde, blue-eyed, almost twins, the personification of Aryan princesses.

Of course, she was subsequently condemned for this, as she was for marrying the British fascist leader, Oswald Mosley (in Berlin, with Hitler as a guest), but she should have been praised because of what she tried to do. Diana was related to Winston Churchill (who painted her portrait), and a friend of both Randolph and Diana Churchill, and so when she got back from the Olympics, the Churchills invited her down to Chartwell.

Mary Lovell, a Mitford biographer, takes up the story in her book, The Sisters, the Saga of the Mitford Family.

Churchill wanted to hear Diana’s opinions on Hitler, and the others present―Lord Ivor Churchill and Sarah Churchill―were ‘simply fascinated’ as she told them about him. Earlier Hitler had asked her about Churchill, and it is worth noting that Diana was one of the very few, if indeed there were any others, who knew both Hitler and Churchill well at a personal level.

She suggested that they should meet, convinced that the two great men would get on, though it was clear they already regarded themselves as rivals,

The same scene was reported by Laura Thompson in her book on the Mitford sisters, The Six, although in not such a detailed way.

The following year (1936) she suggested to Winston Churchill that he should meet Hitler―she was the only person in the world who could have introduced them socially―and although Churchill refused it was, in some way, an opportunity missed.

This is no small matter. Diana knew Hitler admired the British for forging an empire around the world, knew that he had no designs on Britain, no national enmity, and because she had been in and out of Chartwell for years, she knew Churchill and his children. She had his ear. She had his attention. Here she was making a personal attempt to get the two leaders together to talk things out.

One can see now, so many years later, why Churchill’s enemies, and there were many, considered him a ‘war monger’ and politically unstable. They were right. He wanted his war. He wanted fame like his great ancestor, Marlborough. And, of course, he needed the money being doled out to him by his Jewish backers in The Source.

Trying to reach an accommodation with the other great Anglo Saxon nation would upset everything.

And so this suggestion, made by someone who knew both men personally, and who loved both countries, was cast aside; thrown away. The blood would start to flow just three years later.

In the event, Churchill would be hailed as a hero, Diana Mosley condemned as a traitor and jailed along with her husband. It’s time someone put up a statue to her. She tried her best to head off this damned war. Who else on our side tried as hard?

Well, her sister Unity for one. Here’s another quote from Mary Lovell’s book:

Albert Speer, another inner-circle member, recalled that ‘even in the later years of international tension Unity persistently spoke up for her country and often actually pleaded with Hitler to make a deal with England.’

And it was just this sort of conversation that worried and irritated Hitler’s chiefs.

Of course, Churchill (through Prime Minister Neville Chamberlain) had his way and war was declared Sept. 3, 1939. Unity’s reaction was to attempt suicide in the Englischer Garten in Munich. She took a pearl-handled pistol given to her by Hitler for protection and shot herself in the head.

She survived, but the combined effort of the two sisters, died that morning.

Ask yourself why the efforts of these two young Englishwomen, both of whom had to learn to speak German to do what they did, are not honoured in their native land, in our understanding of the 20th Century and in our hearts.

Ask yourself why Churchill rebuffed every subsequent effort by Hitler to follow Unity’s pleas that he make peace with England.