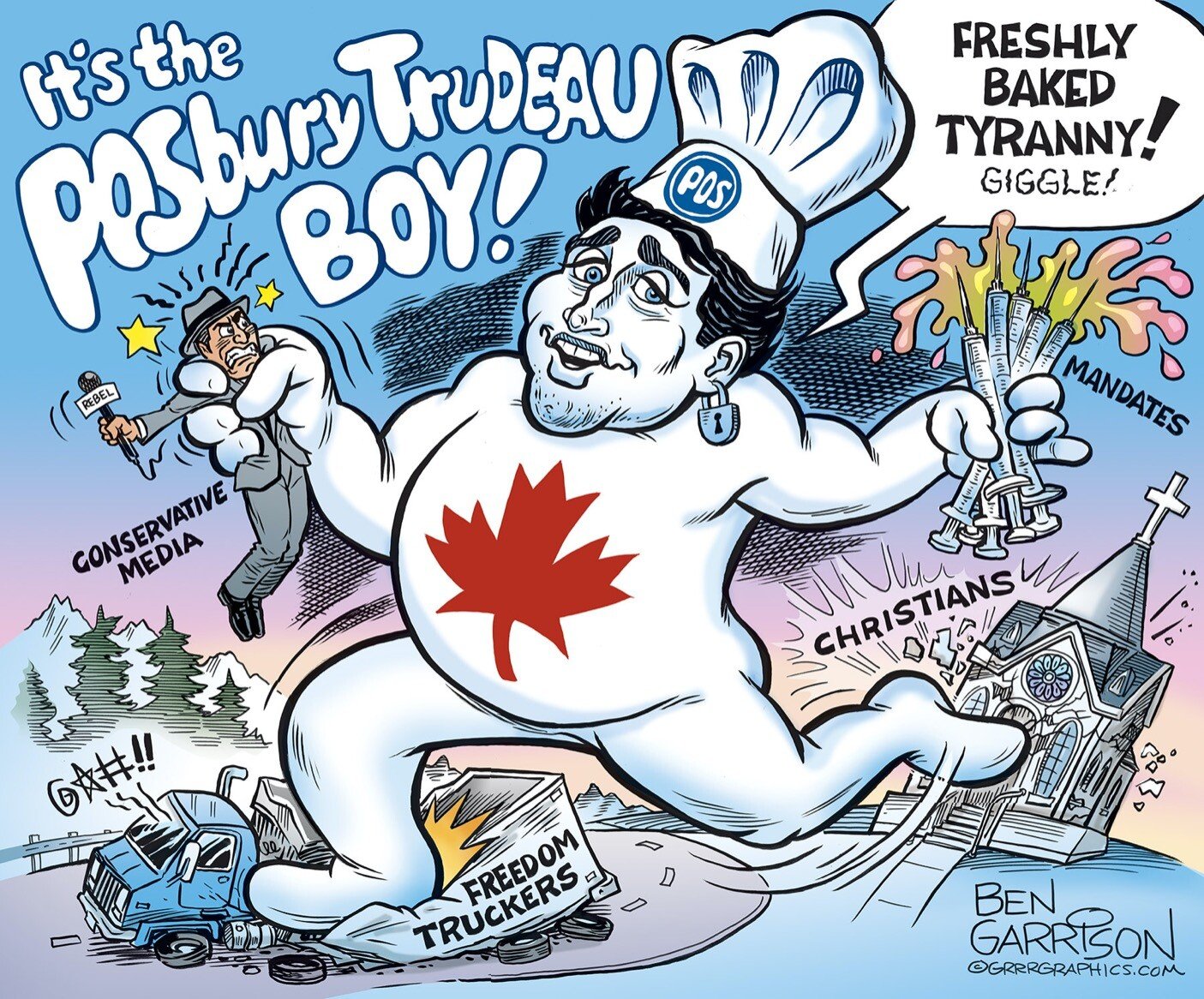 Editor’s Note: This was originally posted at Ben Garrison’s GrrrGraphics. You can support GrrrGraphics Cartoons at SubscribeStar

His father, Fidel Castro, would probably call him a ‘useful idiot.’ Okay, maybe Castro isn’t Justin’s real father, but there certainly is a resemblance–and more importantly—Justin is acting like Castro.

Justin Trudeau praised Castro after his death. His father, Pierre Trudeau, visited Cuba about a year before Justin was born in order to praise the ruthless dictator in person. In fact, the entire Trudeau family seems to have a penchant for such dictators. Justin loves communist China and his father visited the Soviet Union in his younger years to praise Stalin. It’s no wonder Justin is becoming Canada’s tyrannical Prime Minister.

Justin is spoiled and morally squishy. To counteract his weakness he tries to look strong. He once put on fake eyebrows to make him appear more masculine.

He despises conservative media. Just before he arrived at an event, Justin ordered his government goons to rough up a Rebel News reporter. The physical assault was caught on camera. Justin would never dirty his snow white paws himself, but he has plenty of taxpayer-funded thugs willing to do it for him. The goons knew they would go unpunished. Justin, like Stalin and Castro, is not only above the law, he considers himself to BE the law. Justin said the Rebel News organization were not journalists, as if he gets to decide such a thing…just like Hillary thinks she can decide that Julian Assange is not a journalist.

Trudeau has had a field day with the so-called ‘pandemic.’ It enabled him to enter into a child-like state of glee at locking people down and insisting they get forcibly jabbed. Remember, Trudeau hates those who resist the dangerous and under-tested mRNA gene therapy drugs. He even called them ‘racist and misogynistic extremists.’ Like his fellow dictators Macron and New Zealand’s toothy Jacinda Andern, Trudeau is demonizing the unvaccinated in order to create division, fear, and paranoia that is necessary for them to cement their vaccine passport plans. They don’t care about health. They care about power and tracking everyone, which enables them to better manage through force the lives of their citizens on a granular level. It’s about replacing freedom with their tyranny of ’safety-ism.’

Now Trudeau must deal with outraged truckers who refuse the mandatory jabs along with millions of their countrymen who support them. They are driving to their Canada’s capitol, Ottawa, to express their anger. Will Justin use force to stop them? If he does, Canadian citizens will have a good opportunity to show just how soft Justin really is. Those who would use force against the truckers need to consider whether or not they are on the side of a dictator or the Canadian people who value freedom.

The world is being pushed around by a mere handful of power-mad monsters. All we have to do is stop complying and stop participating in the slavery they have baked up for us. I’ve read that Justin absolutely hates the rumor that Castro is his real father. We should all rub that in. The next time Justin faces crowds, perhaps they should chant, “Let’s go, Castro!”