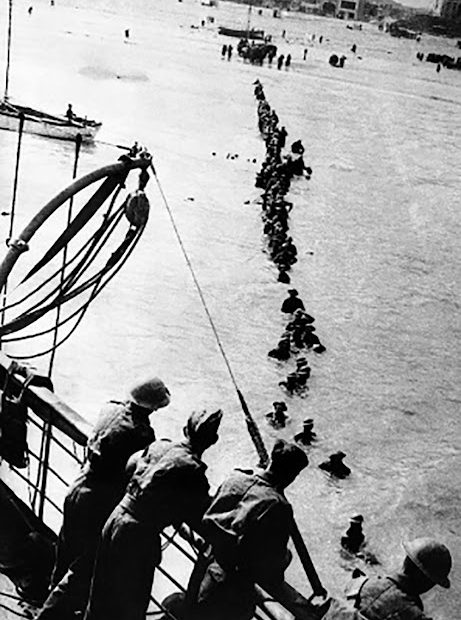 Italian Foreign Minister Count Galeazzo Ciano is credited with writing in his diary, “victory finds a hundred fathers, but defeat is an orphan.” With that in mind, let’s see if we can find fathers for some of the British defeats in the Second World War.

My first example is the largest, the diplomatic blunder of the British alliance with Poland first mooted in Parliament by Neville Chamberlain 31 March 1939 and signed on the 25 of August. This insane move by the British Prime Minister threw his country into a world war it could not win by itself and consigned the Polish people to 50 years of servitude. A far better idea, proposed far too late, would have been a Union agreement with France, making clear to Berlin an attack on either country would mean war. Hitler would have thanked Chamberlain and would have prepared for his confrontation with Stalin, leaving the Franco-British alliance to beef up its defences. Two years later these would have been very considerable, no matter what happened on the Eastern Front.

Next we have the sinking of the battleship HMS Royal Oak in Scapa Flow on 14 October, 1939 with the loss of 833 officers and men, having been hit by four torpedoes from U-47, a Type VIIB submarine of the Kriegsmarine under the command of Kapitänleutnant Günther Prien. Chamberlain was still the Prime Minister, so he gets the blame for this as well.

The Occupation of Norway 8 April to 10 June, 1940 was a failed attempt to block a German invasion of the same country. During the withdrawal, on the 8th June 1940, the British aircraft carrier HMS Glorious and her two destroyer escorts, HMS Ardent and Acasta were sunk by the German battlecruisers Scharnhorst and Gneisenau. 1,519 British sailors, marines and airmen died in the Royal Navy’s worst loss of WWII. The culprit this time was the Captain of Glorious who was anxious to get home early to court martial the head of his air wing.

The defeat of the British armoured thrust at Arras 21 May, 1940 has been called a victory because it rattled the German high command. Still, I’ll call it a defeat because the British retired and only 28 of the 88 tanks committed returned to their start line. Had it been successful, the German advance would have been stopped short of the coast. Who’s to blame? It’s easy to finger the French for not coordinating with the British, but the confusion was mutual due to the speed of the German advance.

Operation Dynamo, the Dunkirk evacuation from 26 May and 4 June 1940 (illustrated above) is also called a victory because 338,226 allied forces were lifted from the pier and beaches at the French port. However, all their equipment and weapons were left, essentially disarming the British army. As Churchill himself said, wars are not won by evacuations. It’s hard to pin this on any one individual, however it’s interesting to contrast the defence of Dunkirk by the British and French with the defence of the same port by the German army for nearly a year in 1944/45.

HMT Lancastria, a converted passenger ship, on 17 June 1940, evacuating troops and civilians from St Nazaire, with between 4,000 and 9,000 persons on board (accounts differ) was bombed and sunk by the Luftwaffe. This, not HMS Glorious, was the worst shipping loss for the British during the war. Because it was so devastating, it was hushed up at the time and is still not well known by the British or Canadian public. The guilty party is whoever made the decision to hold the ship awaiting escorts close to shore.

Everyone is aware of the sinking of the Bismark, but few remember that on 23 May, 1941, Bismark sank HMS Hood in Denmark Strait when one or more shells from its fifth salvo, fired from a range of approximately 16,650 metres (18,210 yd) caused a devastating magazine explosion that destroyed the aft part of the ship which sank in three minutes with a loss of 1, 418 men (three survived). There are various theories of why Hood blew up, the most likely is a lucky hit, thus no one’s fault.

The Battle of Crete, May 20 to June 1, 1941 saw 22,000 German paratroopers defeat a British, Greek, New Zealand and Australian force of 42,500. This is often portrayed as a pyrrhic victory by the Allies, but in fact we had 23,000 casualties while the Germans had 5,900. But who’s counting, eh? More bad news was waiting for our Aussie friends at the end of the year, closer to home.

The Fall of Hong Kong was an heroic attempted defence by 14,500 British, Canadian and Indian troops of the Crown colony against nearly 30,000 Japanese troops between 8 and 25 December 1941. Given that the garrison could not be, and was not, reinforced, the decision by Winston Churchill to increase the size of the garrison earlier was suicidal in the face of Japanese air and sea power. The same Prime Ministerial thinking was behind the next disaster.

The sinking of the Prince of Wales and Repulse 10 December 1941 in the South China Sea by Japanese land-based torpedo planes was caused because the Captain of HMS Prince of Wales didn’t request, or insist, on air cover. Wikipedia notes: “No. 453 Squadron RAAF, which was to provide air cover for Force Z, was not kept informed of the ships’ position. No radio request for air cover was sent until one was sent by the commander of Repulse an hour after the Japanese attack began.” Whether the Australian Air Force could have turned back the Japanese attack is, of course, unknown.

Meanwhile, back in the Mediterranean, at Alexandria, on 19 December 1941, Italian frogmen placed mines that blew holes in the battleships HMS Valiant and HMS Queen Elizabeth as well as an 8,000-ton tanker and a destroyer, causing serious damage which put both battleships out of operational use until 1943. This piece of daring-do deserves more fame, both to its success and relative bloodlessness (8 crewmen killed).

The Fall of Singapore 15 February 1942 is perhaps the most inexplicable failure of British arms in the entire war. Some 85,000 British, Australian and Indian soldiers surrendered to 36,000 Japanese. It’s a fascinating story well worth reviewing in detail. Who’s to blame? I’m going to pin it on Churchill because he should have known to never reinforce or defend a peninsula. The Americans learned the same lesson in the Philippines. The correct action would have been to evacuate as many troops as possible, and aircraft, to Australia or India. In other words, one retreats into the hinterland, not into a point of land.

The Bombing of Darwin, 19 February 1942, brought out the very worst of both the Australian military and civilian population. Some 188 Japanese aircraft from four aircraft carriers, as well as 54 land based medium bombers, attacked the port, killing 234, wounding 400, destroying 30 aircraft and sinking 11 vessels, for a loss of two killed, one captured and 34 aircraft damaged. The raids caused chaos in the town, with reports of looting, and the desertion of 278 air force personnel. More than half of Darwin’s civilian population fled into the countryside never to return.

It’s clear a little more boldness on the part of the Japanese commanders would have seen a successful invasion of Northern Australia since there was no one to stop them.

The capture of Tobruk in Northern Africa 7–21 June 1942 has had many explanations, but basically Erwin Rommel out thought the defenders by attacking from the east and then outfought them. Some 33,000 British soldiers were captured, the second largest capitulation by the British Army in the war, after Singapore. A British Court of Inquiry was held in absentia in 1942, which found Major-General, Hendrik Klopper, of the 2nd South African Division, to be largely blameless for the surrender and ascribed the defeat to failures among the British high command.

The Destruction of Convoy PQ-17 (June 17 1942) was a classic and tragic case of losing your nerve. The convoy to the Soviet Union ports of Archangel and Murmansk was to be accompanied by a strong escort force of Royal Navy and U.S. Navy ships, partly for defence, and partly to lure out the German surface fleet of Tirpitz, Admiral Hipper, Admiral Scheer and Lutzow. Besides the carrier HMS victorious were the battleships HMS Duke of York and USS Washington as well as the heavy cruisers HMS Norfolk, USS Tuscaloosa and USS Wichita, as well as 35 merchant ships containing enough war material to furnish five Soviet divisions.

Of the 38 ships in Convoy PQ-17, German aircraft and submarines sank 24. Only ten ships and four auxiliaries reached their destination. Well, this is an easy one, when baiting a trap, don’t remove the trap. Sir Dudley Pound gets the black eye for this one.

The Raid on Dieppe 19 August 1942 resonates with Canadians because it was largely a Canadian effort with very poor British planning, leadership or support. Wikipedia has this analysis:

Aerial and naval support was insufficient to enable the ground forces to achieve their objectives; the tanks were trapped on the beach and the infantry was largely prevented from entering the town by obstacles and German fire. After less than six hours, mounting casualties forced a retreat. The operation was a fiasco.

Within ten hours, of the 6,086 men who landed, 3,623 had been killed, wounded or captured. Who’s to blame? Louis Mountbatten was the Allied commander, so he’s the one.

The Battle for Caen, starting on D-day 6 June 1944 is taken today as a success for the British because it held up German armoured divisions from racing down to the beaches six miles away. Viewed the other way, you could say the German Panzergruppe West successfully held up the British and Canadians from breaking out to the south or east. Tactically, it was a British Canadian defeat in which we lost 5,500 casualties and about 400 tanks. It was called a strategic success later because the British and Canadians allowed the Americans to come round from the south and close the Falaise gap.

A Bridge Too Far is the name of a book, and a movie, about the failure of Operation Market Garden to take the bridge at Arnhem over the Rhine from 17–25 September 1944. A prompt German counterattack surrounded the British airborne landings and held off Allied ground forces. The British suffered 15,326–17,200 killed, wounded, and captured, had 88 tanks destroyed and lost 377 aircraft and gliders. The idea was dreamed up by Field Marshal Bernard Montgomery and strongly supported by Winston Churchill and Franklin Roosevelt. Those darned Germans, they just didn’t want to play ball.

I have left the V2 rocket program for last. Since no V2 rocket was ever intercepted before, during or after liftoff, and because the V2 attacks on England resulted in 2,754 civilians killed in London and 6,523 injured, this has to be classified as a British defeat.

Of course, Britain won the war, so none of this really matters, some would say. Not me. Every one of these deaths goes back to Neville Chamberlain and Winston Churchill who egged him on to start a needless war.