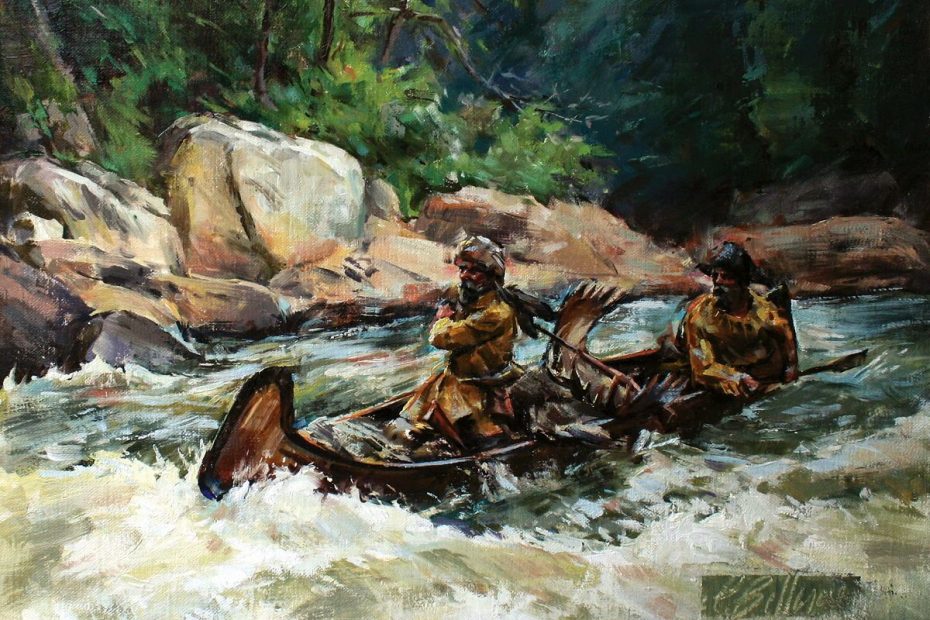 The standard bureaucratic definition of the coureurs-de-bois is they were unlicenced fur traders from New France, “outlaws of sorts because they did not have permits from colonial authorities” who played “an important role in the European exploration of the continent…vital in establishing trading contacts with Indigenous peoples.” Donald Creighton (1902-1979), once known as the premier historian of Canada, a super bookish man who, in his words, “was born into a household in which books, history, biography, literature were all about,” often brings up the coureurs-de-bois with words of admiration for their lifestyle and values in his grand survey Dominion of the North: A History of Canada (1944, rev edition 1957).

The coureurs-de-bois were the “more enterprising and reckless” of the seigneurs, the landed gentry “who struggled to hold their position…abandoned the difficult career of gentility… who came to terms with the very forest which had mastered them, took to the woods themselves”.  They were gentry farmers “crippled with debts, haunted by poverty, and yet unwilling to surrender all their social pretensions…sometimes compelled to abandon normal standards of life in order to keep a draggled show of gentility”.

It is evident from reading Creighton that the coureurs-de-bois were authentically an indigeneous people of Canada not found anywhere else on the planet except in the wild forests of New France.

The coureurs-de-bois were the most distinctive social creation of New France, the personification of its dynamic vitality and its curious primitive weakness. People deprecated the existence of the coureurs-de-bois and deplored their activities; but they could not be suppressed. They sought the only real wealth which the colony had discovered and the only rich and varied experience which it could afford. When the last whitewashed stone house of the last seigniory disappeared behind them down the river, they slipped at once into the wilderness of rock and lake and forest, vast fickle and unfriendly empire of perils and fatigues and privations. A sense of the treachery and violence of Nature in the new world was in their blood. They were inured to hardship, callused to danger.

There are no men like the coureurs-de-bois left in Canada. The model of how men should be today is Justin Trudeau with his tongue out in globohomo gay parades.

There are no historians like Creighton either. Creighton was a Canadian with an “unnatural prejudice against the stodgy”. His Britishness was perceptible, but of a Canadian kind. He had a deep appreciation for the history of New France. He found the English people “all right”, unattracted to the effeminacy of Oxford upper class students and professors: “Particularly when I am at tea somewhere I do wish I had a bomb to explode and wake them all up. They’re nice, but very satisfied.”

It was men nurtured in the emasculated atmosphere of post-WWII Oxford who laid the groundwork for the surrender of Britain to aggressive, welfare-oriented, and psychologically docile immigrants. He would have despised the Canadian academics of today.

In the forest of the coureurs-de-bois, “there was freedom from the stuffy conventions and odious taboos of seigneurial society”.

The Lumbering Men of New Brunswick

Creighton saw in the lumbering community of nineteenth century New Brunswick a continuation of the spirit of the coureurs-de-bois. In the upper reaches of the Saint John and the Miramichi, the most energetic and ambitious young men sought the companionship of the lumber camps in the winter, drove the great rafts of squared timber down the river when spring came, and spent the greater part of the summer in a long career of riotous living. With their dislike of the drab, continuous work of the farm, their impatience at the puritanical restraints of society, their love of rum, of gaudy finery, of uproarious companionship, the lumbermen were the coureurs-de-bois of the nineteenth century; and they swaggered about the streets of Saint John with the same jaunty and insolent assurance that the returned fur traders had once showed in Montreal.

The continuation of the genes of these lumbering men may explain why the support of the PPC was highest in the province of New Brunswick. Without men like these a nation is doomed to be taken over by the conniving aggressiveness of immigrants without free individuality in collusion with Oxford-type, CBC  mentally castrated journalists and politicians.