Communism By Any Other Name 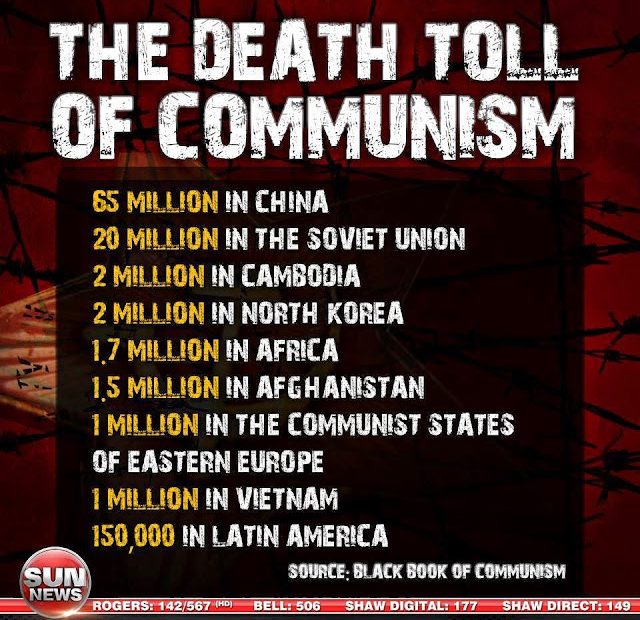 In trying to describe the quickly emerging soft totalitarian states in Western Europe and Canada today, conventional labels seem inadequate. But “fascist” is by far the most commonplace. “Communist” is seldom used except in reference to the “Chinese Communist Party State”. This should not be surprising.

Given the Leftist capture of academia, the Mainstream Media, Google, FB, Twitter and major corporations, it is fair to say that they control the narrative—and just as critically, the language. Even those who are opposed to their agenda have come to adopt Leftist terminology, which is rife with words that bias discussions before they begin, and predispose participants toward Leftist arguments.

Particularly vexing is that whenever negative portrayals of anything that smacks of intolerance, violence, government over-reach or arbitrary action are called for, references to Hitler or Nazism or Fascism are made. The logical fallacy of “Hitlerlum ad absurdum” is employed as the standard show-stopper by Leftists who are losing the argument.

There is another reason why “fascism” or “fascist” is the go-to epithet chosen by Leftists and anti-Leftists alike. Allied soldiers fought the Axis powers, not the Soviets. And Hollywood producers, disproportionately Jewish, made it their project to churn out hundreds of films and documentaries that depicted the Nazis as the most wicked and evil force in history, and the Holocaust the most horrific example genocide committed in the 20th or any other century.

Consequently, three generations of Americans and Canadians can ream off the names of at least two or three Nazi concentration camps, but are unable to name a single Gulag. They are aware of the atrocious crimes committed by the SS and Einsatzgruppen, but relatively few have heard of the Katyn massacre, the Holomodor, or the rape of 2 million innocent German females of all ages by Soviet soldiers in Berlin . And almost none of them know that Stalin’s “body count” was many times greater than Hitler’s, and that Communist regimes in Eastern Europe and Asia were responsible for the murder of 100 million people.

This is moral selectivity of the worst kind. And it is high time that the imbalance be rectified by citing Communist examples of mass murder, mind control, coercion and slavery. The hammer and sickle and the red star deserve to be considered symbols as odious as the swastika. The day must come when adherence to Communism no longer be forgiven as a youthful indiscretion, and the display of a Communist symbols by professors  be a cause for summary dismissal and national disgrace. But I am not optimistic.

It is time to stop letting Communism off the hook. Analysts of present day totalitarian states must not be reticent in using “communist” as a descriptor for contemporary corporate-Marxist hybrids which fight a class war against small business, ordinary workers, and farmers by stoking racial animosities and fostering identity politics masquerading as social “justice”.

That is why I would much prefer to use examples from Communist regimes, and characterize contemporary totalitarian states and movements as “communist” rather than “fascist”, because that latter is being employed more as a pejorative than an accurate description.

Yes, fascism has been defined as a merger of corporations and the state, and certainly that is what we see in China and to a large extent in the United States, particularly in regard to Big Tech and Big Brother. But SJWs do not draw their inspiration from fascism, but from Marxism.

Fascists do not preach the gospel of egalitarianism, but hierarchy. Hierarchy better fits human nature, egalitarianism runs counter to it. When asked what he thought of Communism, famed Harvard University biologist E. O.Wilson replied, “Good idea, wrong species”. Any utopian project to force humans to behave like ants must necessarily employ more extensive, draconian and intrusive measures. After all, it can take a sledge hammer to drive a square peg into a round hole.

Both fascism and Communism are about top-down control, but Communism 2.0 is more determined to wipe out any vestige of independent civil society. Their methods are more pragmatic and sophisticated than those of their predecessors(owing to surveillance technology etc.), but the end game is the same.

To lump the Liberals, NDP and Greens together and refer to them as “Communists”, as I do, is regarded as hyperbolic and absurd to many who have heard me say it. But a stinkweed by any other name…..They have the same mindset and the same objectives as Red Pioneers a century ago. They are Communists updated and adapted to exploit the new realities of this age. If one wants to understand the alarming transformation of a once liberal putatively democratic nation such as ours or our Western European and Australian counterparts into an increasingly totalitarian one, the history of Soviet bloc countries in Eastern Europe afford the best case studies, as Eastern European immigrants attest. This is one of them:

The following is a transcript of the last two and half minutes of the 17:06 minute interview with Joseph Forgas, who escaped from Communist Hungary in the early 70s, after the Soviet invasion of Czechoslovakia dispelled any hope for liberalization in Hungary. After a harrowing journey, Forgas made it to Austria, and from there was able to successfully apply for Australian citizenship, as that country was actively welcoming immigrants at that time.

His comments about life under Communism and the naïve misconceptions that many Australians had of Communism are pertinent to our present predicament. He was pleased with his choice of country but became dismayed by what many people there and elsewhere in the West imagined life to be like under communist rule.  As the transcript reads:

A lot of people I spoke to had absolutely no understanding of the nature of the communist system which at that time was of course still in existence. They had very idealized notions of a more egalitarian and a more utopian society which despite its difficulties is heading the right direction. I had countless arguments and debates and discussions with people trying to explain to them that they have a fundamental misunderstanding about the nature of communism and how it really works but I’m not really confident that I managed to convince anybody. It was a very, very difficult idea to put across and most people who grew up in Western liberal democracies actually can’t even imagine what it is really like to live in a totalitarian society.

I think the idea that as an individual you are completely insignificant, powerless and exposed is very difficult for somebody to understand who never had that feeling.

The other issue that’s very difficult to explain to people is the monolithic totalitarian nature of communism. Even right-wing fascist dictatorships do not directly run every aspect of life, even in Hitler’s Germany there were businesses which were not state owned. There were churches which were not totally state controlled. The really difficult aspect of communism is that there is one single source of centralized power and this source of power encompasses everything. Everything is nationalized, every company. Every workplace is run by the party. Everything is run by the party there’s actually no escaping it.

My late Hungarian aunt and her family would have corroborated Forgas’s story, a story that a young university Leftist fool like I was in the late 60s and early 70s, refused to believe.

As one beholds the Leftist campus fools who succeeded them in the decades since, one must conclude that the allure of Communist tyranny to a faction of our citizens is immortal. Having renounced the Christian vision of a New Jerusalem and a heavenly Kingdom awaiting us, they seek to replace it with a secular equivalent that consistently fails to translate into a collectivist paradise on earth that they imagine. A belief in a distant Shangri-la assumes different guises, offering hope and consolation to humans of all eras, seems to be an ineradicable human need. The dream can be a harmless coping mechanism, or a blueprint for hell on earth. IMO, Communism 1.0 or 2.0 fits the bill like nothing else before it, the scale of carnage not being the only metric of evil.