A Society Immune To “Genocide” Fatigue 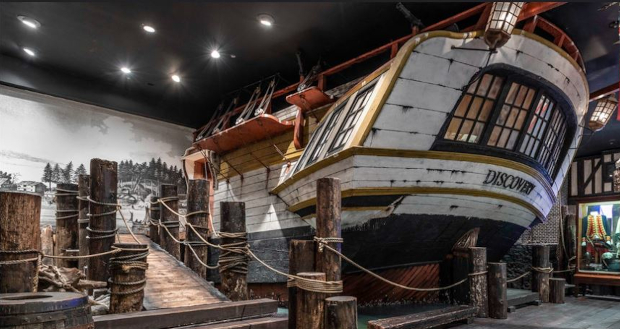 Museum visitors could walk through the recreated captain’s quarters of George Vancouver’s ship.

Further dispatches report more Canadian native graves that, like the Kamloops burials, have long been publicly known even though they’re unmarked. Increasing the mania, journalists explain that the graves were associated with residential schools for natives, a pre-1997 institution largely blamed for what Canada’s elite calls “cultural genocide,” a term usually shortened to simply “genocide.” Eventually the “mass graves” and “mass murder” accusations drop off. Yet the “genocide” allegation persists.

“Holy shit!” the Ukrainians, Armenians and Tutsis exclaim in unison. “We thought our people had it bad. But some of those guys had to attend boarding schools prior to 1997.”

The conference’s Chinese delegates label the native schools Canada’s Rape of Nanjing, Cambodians call it Canada’s Pol Pot horror and Arabs compare it to a cumulative effect of the Mongol sack of Baghdad, the Nakba of 1948 and no end of other Middle Eastern nightmares.

Nevertheless Canada shows no sign of genocide fatigue, despite that preposterous accusation pushing an escalating campaign of guilt-mongering against whites, excuses for native dysfunction and rationalization for native privilege.

Just one of many recent developments comes in the plan to dismantle a major exhibit in Victoria’s Royal British Columbia Museum.

Up to now one of the museum’s two major themes (the other being native culture), the Becoming B.C. Gallery takes visitors through the province’s history of European exploration, industrialization and settlement, culminating in a wonderfully re-created Old Town featuring a 19th and early-20th century street lined with full-scale models of actual historic buildings.

But that’s got to end by January. Becoming B.C. must be gone to further “the process of decolonization in these galleries, in response to the call to action from Indigenous leaders to increase cultural safety and ensure the museum is a welcome place for everyone.”

Increase “cultural safety”? If there’s any danger here, it’s historical falsification. Canadians are sitting ducks for such a predicament, thanks in part to our education.

While the total collapse of institutionalized learning is relatively recent, B.C. schools have disregarded history at least as far back as the 1960s. Elementary and secondary “education” didn’t teach the subject, outside of a grab-bag course called Social Studies.

Those of us who attended B.C. schools back then and probably long before and after learned that Spartan boys weren’t sissies, Romans didn’t have cars but built roads anyway, barbarians invaded each other, vassalage had nothing to do with petroleum jelly, Columbus debunked flat-earthers, some proto-provinces met in Charlottetown but only Quebec and Ontario mattered, and I think that was about it. A Vancouver education suggested history was something that happened elsewhere, wasn’t at all interesting and—in a real example of what might be called “cultural danger”—didn’t matter.

Then a sense of wonder overcame me as a teenager entering the Becoming B.C. Gallery’s Old Town. It was the first, and maybe still the best such indoor museum re-creation I’ve seen. It stirred an inchoate feeling I’d previously experienced as a child walking up the street of an isolated ghost town where our family had camped for the night, and on first seeing Vancouver’s Yaletown neighbourhood in the late 1960s, when it seemed (to me, anyway) little changed since the turn of the century.

In a city where ongoing demolition and redevelopment gives the past so little presence, historical awareness helps foster a sense of continuity. More importantly, it offers perspective on the present and maybe the future too.

That feeling of walking into the past, exhilarating in itself, can help inspire a lifelong fascination with history. Of course no one with any concept of the subject would think a single museum exhibit, book, university program or other source would comprise the alpha and omega of any historical topic.

So it was with growing dismay that I later served on a volunteer committee that tried to launch a B.C. history website. One participant dropped out early when he found another site on the subject. “It’s already been done,” he announced.

On another occasion the CEO of the Vancouver Museum (Canada’s largest municipal museum) slammed her hand on the table to emphasize a grand proclamation: “We can’t have different views of history!”

Thankfully a recently retired academic immediately responded: “That’s what history is—different views.” Fixing an incredulous look on the CEO, she tried to explain this to an evidently totalitarian mind.

Vancouverites hold no monopoly on this ignorance. Possibly typical of Canada’s Fourth Estate was the newspaper editor who told me there’s no reason to read history because any “fact” can easily be found on Google. This guy was previously one of the top copy editors at the Calgary Herald.

Further demoralizing are many visitors to local museums. In contrast with Europeans, Canadians resemble Americans by wandering around in a confused daze, seeming to expect Disneyland-style diversion while their kids run amok. The IMAX theatres adjoining both the Royal B.C. and Vancouver museums only further the expectation of passive entertainment.

In such a cultural void, there’s little to stop propagandist revision. Just one example came in an apparently native-curated temporary exhibit at the Vancouver Museum. Prominently expressed as fact not legend, a sign stated: “Our people have lived here since the beginning of time.” A lot of kids and too many Canadian adults would believe that brain-searing garbage.

But whether native exhibits are curated by natives or not, it’s easy to predict what they won’t mention: native practices of slavery, torture, war, geronticide, female infanticide and genocide (the real kind).

Further complicating the presentation of native history is the fact that almost all research and documentation has been done by non-native (again, mostly white) historians, linguists, archeologists and others.

That pretty much restricts acceptable accounts to victimology, even when it tests the bounds of genocide fatigue.

Such rhetoric might call into question the ability to get along with other non-whites. Wouldn’t the revamped museum have to place greater emphasis on B.C.’s Chinese, Japanese and Sikhs, among others? Who’ll guide the institution through the rivalry inherent in identity politics?

Maybe it’s anthropology, not history, that might have once explained the native experience. Maybe anthropology could have revealed why Canadian natives failed to adapt to post-Stone Age adversity that has affected most cultures at one time or another.

Like the province’s other major collections (for example the University of British Columbia Museum of Anthropology and the U’mista Cultural Centre at Alert Bay), the Royal B.C. Museum’s already very extensive native galleries display no end of artifacts, especially wooden masks and totem poles. But there’s an awful lot more to anthropology than the admiration of pretty carvings—at least there was before the curtain went down on that area of study too.

Points like these tend to be lost on people limited to a typical Canadian education. That hands all the more power to the victors.

Greg Klein has a blog Vancouverzeitgeist.ca