The Logic of the Herd 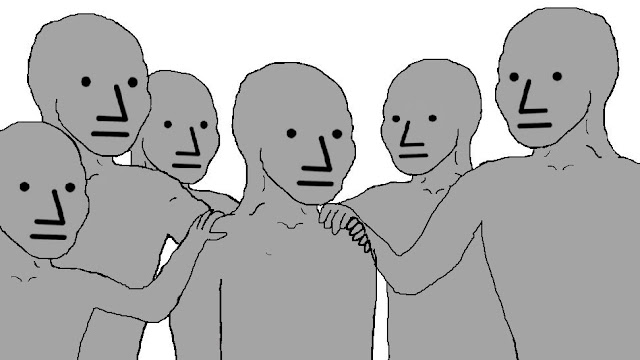 In its relentless campaign to promote vaccination, the CBC recently asked a parade of pro-vaxxers about their attitude toward those who refuse to be vaccinated. One of them, a doctor, summed up the consensus: “I think it’s OK to have freedom of choice, that is their right. But other people have the right not to be infected by those who make that decision.”

Firstly, this vaxxer obviously believes that unvaccinated people can contract Covid-19 and transmit it to other people. That’s a given. But who are these “other people”?

If this vaxxer agreed to be vaccinated, one can assume that he did so because he thought that he would not be infected by Covid-19 if he was double-vaxed. Right?

In that case, he should be invulnerable to those ‘stupid, selfish and irresponsible’ people who have not yet submitted to the Covid jab. The protected do not need protection from the unprotected. He should not be worried for his own welfare. And he should not be worried about the welfare of the 82% of Canadians who also have been double-vaxxed. Right?

But the unvaccinated, by choosing to remain so, obviously aren’t worried about being infected. They are not concerned about their “right” not to be infected by other unvaccinated people.

So where is the logic in this? What are the evangelical worry warts worried about? Certainly not my rights. And certainly not the Nuremberg Code, which they have never read, cared to read, or cared to think about. It contains an inconvenient declaration that no human being must be subject to a medical procedure without his informed consent.

Oh, and by the way, if I am threatened by job termination or coerced into getting vaccinated, it is not “voluntary”. “Submit to this medical procedure or forfeit your career and livelihood” is an ultimatum, not an offer of free choice. It is a clear violation of the Code that 14 million Allied soldiers, sailors and airmen died to secure.

My uncle was one of those people. He went overseas to fight the folks who believed in CONTROL. In lockdowns and passports and silencing critics and state propaganda and media uniformity and thought control and unconstitutional measures. And forced injections. You know the type. In Canada we call them “Premiers”.

Given his sacrifice, and the sacrifice of 45,000 other young Canadians of his generation, I am in no mood to knuckle under to tyranny.

Those who would subject me to an involuntary injection deserve to be similarly injected, ideally by a camp doctor as they lie strapped to a bed.

There needs to be a second Nuremberg Trial. If there is, I expect that there will be at least one bioethicist in the dock. On second thought, let’s stage the trial at Western University in London, Ontario, the epicentre of Maoist morons and facile fascists.

Actually, the phobic double-vaxxed do have cause to worry, but it should not be about the virus, but about the vaccines. You know, the ones that are deemed “safe”.

That is exactly why I believe that vaccine passports are meaningless. People with a vaccine passport can transmit Covid too. So how is barring unvaccinated people from public spaces helpful in “stopping the spread” of cases? Is this really about fighting a ‘pandemic’? One wonders.

How then do we stop this ‘virus’?

We don’t. It will always be with us.

You cannot make these viruses go away. The natural history of ALL respiratory viruses is that they circulate all year long, waiting for the immune system to get sick through the winter, or become deranged — as has happened recently with these vaccines. Then they cause symptomatic disease. Because they cannot be filtered out AND they have animal reservoirs — no one can make this virus go away… No vaccine prevents you from getting infected. You get infected. You shed pathogens. This especially true of viral respiratory pathogens. You just don’t get symptomatic from it. So, you cannot stop spread. You cannot make these numbers that you planned on get better by doing any of the things that you’re doing. Because that is the nature of viral respiratory pathogens. And you can’t prevent it with a vaccine, because they don’t do the very thing that you’re wanting them to do. And you will be chasing this the remainder of your life until you recognize that the Center for Disease Control and the Indiana State Board of Health are giving you very bad scientific guidance.

If we continue to regard vaccine boosters as our saviours, and resort to draconian measures when they fail to deliver, then we will be condemned to a future where masks and lockdowns, vaccine passports and travel restrictions are permanent fixtures of our society. As the saying goes, those who trade liberty for safety wind up with neither.