Create the Sickness, Sell the Cure: A Tale of Medical Malfeasance and Mass Murder as History Will Tell It 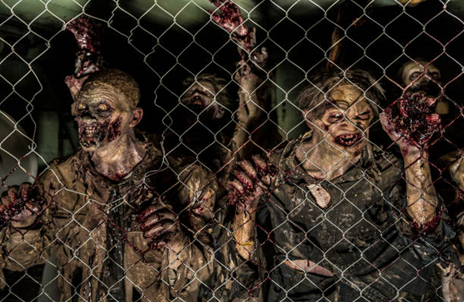 2031: The desperately vaccine-dependent masses clamour for the 32nd booster to stop the 64th variant that comes with the 20th wave.

They were told to wear useless masks, avoid social gatherings and keep their kids away from school, despite the fact that children were a very low risk group.

They were told to maintain a social distance of 6 ft. despite the fact that that requirement was fabricated without scientific validation [1].

They were told to hang in there, until “the vaccine” was developed and rolled out to save the day.

And when the vaccines arrived they complied by getting vaccinated. That, they were told, would obviate the necessity of wearing masks and observing social distancing rules. Life would return to normal. The vaccine would protect them from re-infection and prevent transmission.

And when those assurances proved false, they were told to get another booster to stop the new “Delta” variant. More infectious, but less lethal.

But still more “cases” occurred. Once again the hospitals were being stretched by very sick infected patients. Or so they said. The British and Israeli experience contradicted this portrait. Skeptics smelled a rat. Experience told them that there were three kinds of lies. Lies, damn lies and Covid statistics.

Misdirected anger was fuelled, and the mob turned on the “vaccine hesitant”. The hold-outs were attacked, intimidated, bullied and denied access to a growing range of services. As Ontario’s Chief Medical Officer predicted, those measures “changed their behaviour” Coercion worked. It was a massive violation of human rights, and the Nuremberg Code, but governments enforced it, and businesses too.

Meanwhile, increasing numbers of people experienced blood clots, many died, and many of those deaths were unreported or misattributed to other causes [2]. BigTech and governments did their best to keep a lid on it, but the truth will out. But the awakening came too late. Those who had not yet perished suffered significant impairment. Their natural immune systems, like an atrophied muscle, were too weak to resist further variants, made more powerful and resistant by previous vaccines [3]. They needed another “fix” of gene therapy. Another booster. Another leaky vaccine. Again and again. The vaccinated were not human anymore, they were hopelessly compromised drug addicts, creatures fit to perform in a science fiction horror movie.

The ‘pandemic’ could have been stopped in its tracks. Not by “vaccine” immunity, but by early treatment [4]. By natural immunity. Patients would recover and armed with antibodies would afford better protection against the Delta variant than the booster. The trouble was, that treatment would involve the application of ingredients that Big Pharma could not make money from. Thus a repurposed “horse paste” that was administered to Covid-infected people in the Indian province of Utar Pradesh with impressive results had to be discredited because it was virtually free. The collaborators and agents of the Pharmaceutical Industry — the criminal class of bought politicians and the medical college administrators under their wing — made sure that the alternative treatment measures and those who advocated them would never see the light of a hospital, medical office or drug store. No medical doctor could advocate their use or prescribe them without losing his license.

Then the real pandemic unfolded. The pandemic of the vaccinated. Of the duped, the fearful, the congenitally compliant, the indoctrinated, the willfully uninformed and misinformed, too weak to break from the pack, too lazy to do their own research, and too phobic to be reasoned with. But should blame be directed at the frightened herd, or those who led them off the cliff?

No punishment could be proportionate to the scale of their crimes. I rather doubt that Fauci, or the talking heads of the global communist medical establishment, or the politicians who did their bidding will own up to their unspeakable criminality. A second Nuremburg Trial is warranted.

They have a lot to answer for.

Infected with Covid-19? Stay home and try this for starters ASAP: Among other things, aspirin, zinc, Vitamin D and yes, the maliciously maligned ivermectin—but good luck in getting it [4].

[1]. Scott Gottlieb, the former commissioner of the Food and Drug Administration (FDA), admitted during an interview on Face the Nation that the six foot social distancing rule recommended by public health officials for months on end was actually “arbitrary in and of itself,” and he noted that “nobody knows where it came from.”. Pfizer CEO Albert Bourla said that, at some point in the future, a strain of COVID-19 that is resistant to vaccines is likely to emerge. (cf. Fortune, Feb. 3, 2021).

[2]. A paper published in a peer-reviewed science journal, Toxicology Reports (August 2021) cites the following numbers from VAERS (the Vaccine Adverse Events Reporting System, which is a passive surveillance system managed jointly by the CDC and FDA): “Over 285 million doses of COVID-19 vaccines were administered in the United States from December 14, 2020, through May 24, 2021. During this time, VAERS received 4,863 reports of death (0.0017 %) among people who received a COVID-19 vaccine.”

HOWEVER, this Toxicology article adds that “historically, VAERS has been shown to report about 1% of actual vaccine/inoculation adverse events“. The article continues: “A novel best-case scenario cost-benefit analysis showed very conservatively that there are five times the number of deaths attributable to each inoculation vs those attributable to COVID-19 in the most vulnerable 65+ demographic. The risk of death from COVID-19 decreases drastically as age decreases, and the longer-term effects of the inoculations on lower age groups will increase their risk-benefit ratio, perhaps substantially”.

[3]. The CDC’s Morbidity and Mortality Weekly Report (MMWR) posted online July 30, 2021, details an outbreak of COVID-19 that occurred in Barnstable County, Massachusetts — 74% of the cases occurred in fully vaccinated people. Indiscriminate vaccination is driving mutations, as the virus is mutating wildly to evade the injections.

[4] How to treat COVID, long-haul, and COVID vaccine side-effects: https://www.skirsch.io/how-to-treat-covid/