Unvaccinated Cats Are Killing Us 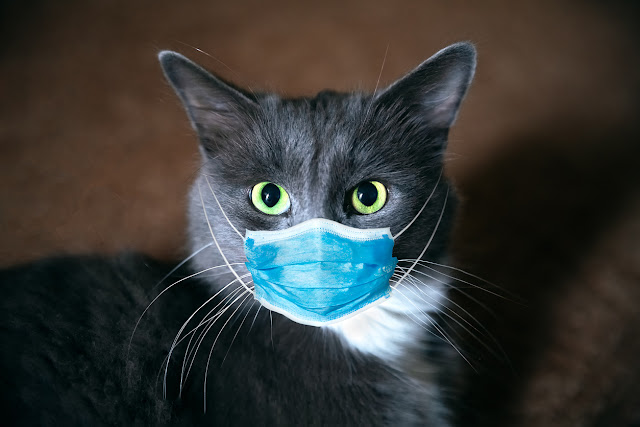 After escaping from a lab, Abby worried that she might be a carrier. So she did the responsible thing. She masked up and took the jab. But most other cats are not so compliant. They are not human after all. They are self-reliant, independent-minded, curious individuals who do their own research and are not so easily intimidated by fear-mongering threats. When they are told that they will be denied social credit, access to services and government entitlements if they don’t play ball, they leave and fend for themselves. They will not trade their liberty for safety and convenience. They are not herd animals and they aren’t given to Groupthink. Amazingly, that applies to Canadian cats as well. If only their libertarian spirit was transmissible to humans…

Recently, MSNBC’s “Stephanie Ruhle Reports” opined that it is “incredibly frustrating that certain Americans” were not getting the COVID-19 vaccination after the Biden administration has made it free and easily accessed.

“How do we turn the corner on COVID? Everyone needs to be vaccinated, and then we need to get in the business of making these long-term investments so we can fundamentally improve our productivity, innovation, and competitiveness in this economy.”

“Everyone”? Is that what it takes to achieve “herd immunity”? Oops. Excuse me. “Vaccine immunity.” Not the same thing, but who noticed?

I expect that before the year is out, the communist medical establishment and their handmaidens in government will insist that fetuses be vaccinated. But that would present a problem. Most of them don’t believe that the pre-born are human, so they would have to agree that other non-humans be similarly inoculated. Pigs, horses, dogs, dolphins, iguanas, butterflies and grasshoppers should be vaccinated as well. Hey, don’t stop there. Let’s vaccinate aliens. Make all little green men produce proof of having been vaccinated before they emerge from their spacecraft. Sorry E.T. but you are on the no-fly list. And good luck in accessing services.

OK. Let’s review the chronology of the flip-flops, turn-abouts and pacifiers.

“Hang tough for a few weeks until we ‘flatten the curve’.”

But weeks and months went by and the only thing that they flattened was the economy. But who cares? Who cares about the small business sector, their employees, students, institutionalized seniors, the isolated and suicidal and other ordinary people. The important thing is that Governors, Premiers and Medical Health Officers were insulated from the pain and distress they inflicted. Those on the government payroll kept their jobs, salaries and perks, and Amazon and the big box stores made a killing.

“Hang tough until we get the vaccine. The vaccine will save us.”

Alas, the vaccine arrived. Then millions were vaccinated, but many got sick, and “breakthrough” cases were reported. Or under-reported. Hmm.

According to British Columbia’s Chief Medical Officer, the more “layers” of protection the better. If you don’t believe her then perform this test. Under a tap of running water, suspend four colanders one atop the other. See? Those “layers of protection” substantially reduced the volume of water that accumulated in the sink. The metaphor fits, doesn’t it? Like Orwell said, some ideas are so ridiculous that only an intellectual would believe it. To that add the Friends of the CBC and the readership of the New Woke Times, Wapo and Huffpost. CNN viewers are in a class of gullibility all of its own.

Then, alas, the vaccine arrived. Hurray! But hang on, if you get vaccinated you should still wear a mask. Huh? I thought not having to wear a mask again was a major selling point for vaccinations. But I must be confused.

Then, what’s this? Some “breakthrough” cases? Vaccinated people were getting the virus? Many vaccinated people are having adverse reactions? That can’t be. Vaccines work. This vaccine works. It’s safe. It has been tested. So it can’t be the vaccine. Quick! We need a scapegoat. Oh I know. Blame the unvaccinated! Biden said that 90% of those who have been recently hospitalized had not been vaccinated. And who would dare question his stats? Or his cognition?

What’s that? Israeli Health Ministry data indicates that those who had been vaccinated (mainly in response to the Delta variant) were almost 7 times more likely to get sick than those who had acquired natural immunity from a previous infection?

Do you mean tell me that the T cells of the previously infected were doing the job? That it is not necessary for them to get the jab? Even dangerous? Funny, I didn’t hear that on the CBC. So it can’t be true.

Next thing you know people are to going start saying that natural immunity works best. Question the vaccine paradigm? Sacrilege! You must be one of those “conspiracy theorists”. A nutter. So Big Pharma is making a killing. So they are big time donors to Congressmen, Senators and governments. And yes it is on the public record and hiding in plain sight. What is your point?

“Seriously you selfish fool, you better get vaccinated because new ‘variants’ are popping up. Yes they are not nearly as lethal but they are more infectious. So get vaccinated! Again and again and again. 80% or 90% vaccination rates won’t do. We need everybody on board. That’s what we have been telling you all along.”

Repeat. Unvaccinated people are killing us. They are the cause of these outbreaks. In the same way that cats were responsible for the Bubonic Plague.