An Aggregat 4 (V2) rocket being prepared for launch.
Germany was the first country in space, not the United States, not Russia: Germany. Its Aggregat 4 (V2) rocket had a first successful test flight on October 3, 1942, reaching an altitude of 52.5 miles (84.5 kilometres). On that day Walter Dornberger, head of the German Army rocket research centre, declared in a speech at Peenemünde:

This third day of October, 1942, is the first of a new era in transportation, that of space travel.

He was prescient about both space and travel. A further model of the A4 on June 20, 1944 reached an altitude of 108.5 miles (174.6 kilometres), well past the Kármán line of 62 miles (100 kilometres) where space is said to begin. To put this in context, the recent flights of Richard Branson and Jeff Bezos were to 53.5 miles and 66.5 miles, respectively.

The first photograph from space was also from an A4, taken Oct. 24, 1946. We’re used to seeing beautiful photos from space, but this is the first one and it deserves its place in history.

After the war, Dornberger, Wernher von Braun (pictured below) and hundreds of other German scientists were spirited off to the United States where they, and American engineers, developed the Redstone missile and subsequently the giant Saturn V moon rocket. All liquid fuel rocket system, including the latest from SpaceX, are based on the German design. 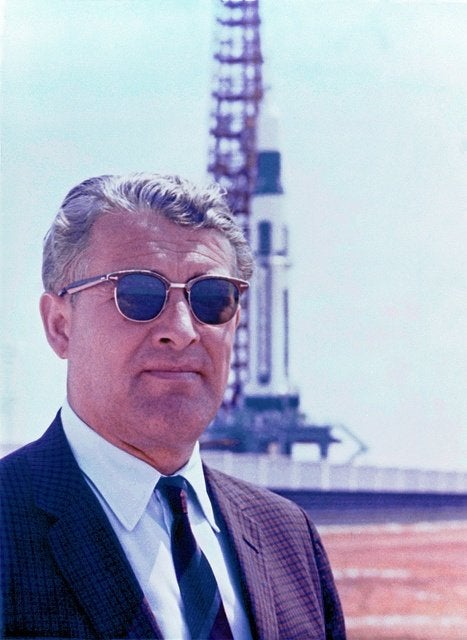 Slave labour was used to manufacture the rocket because Germany’s labour force was stretched to the breaking point. All the fighting-age men, and many well beyond, were fighting, mostly on the Eastern Front. Slave labour was the only available option, short of surrender.

Because the V2 was so devastating, so unstoppable, and had so much potential (later ones had radio guidance), the British government downplayed its significance during the war, and later, leaving many to think it was only a failed weapon. In fact, both to its creators, and to the world subsequently, it was a giant step from earth to space.

This is why, even today, even for people who know the story, it still sounds odd in most minds to give credit where credit is due. Without the investment of the equivalent of $40 Billion (2015 U.S. dollars) by NAZI Germany, and the genius of German engineers, our voyage to space might still be a dream.

Germany, 1st in Space; they should put it on their road signs, postage stamps and government websites. Being first, matters.