Vaccines Are All In Your Head 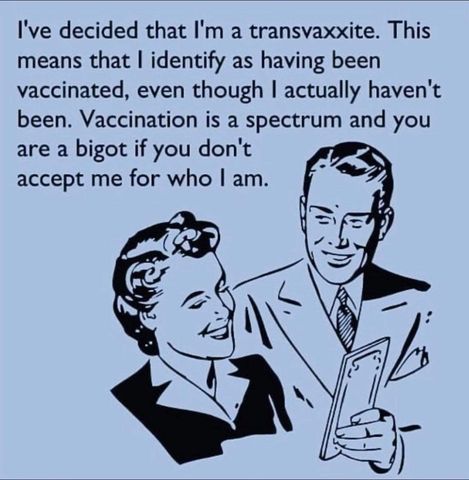 Reality is not binary. And that fact applies to vaccinations. Being vaccinated and not being vaccinated is not an “either/or” proposition. It is not an “on” and “off” switch. It is more like a dimmer (dumber) switch.

I was not vaccinated in the sense that a medical practitioner jabbed my arm with a needle that transmitted a vaccine into one of my veins. Nevertheless I visualized the process and internalized the simulation. I had an experience. And that experience is a valid as anything you can measure or quantify.

Consequently, I identify as a vaccinated human being, and that should suffice. Those who would contest my status as a vaccinated person on the basis of some arbitrary, culturally-bound concept of truth and falsehood should be advised that their failure or unwillingness to share my subjective sense of myself most probably constitutes a breach of the British Columbia Human Rights Code–or soon will. The BC HC is a living organism that expands to accommodate each newly minted victim group clamouring for protection. It is a big tent and getting bigger by the day. It has come to dominate the political landscape.

In their quest for votes, Canadian politicians have determined that to win they must play by the new rules. They must go along with the game. They must readily agree that the Emperor is wearing clothes and that all of us lie on some kind of spectrum—and the smallest nuances must be described in meticulous detail according to the wishes of the aggrieved subject.

In my case that means that I must be referred to as a cis-male, species-fluid, trans-vaxxer living on the un-ceded territory of a First Nations tribe who obtained their land by ethnically cleansing the tribe who formerly occupied it. But that description is merely provisional. I might discover several other selves tomorrow. The point is, I am unique in the universe and I have a right to be treated as such. But at the same time, I must be ranked according to my group affiliation, as I define it. I am an individual but a stereotype at the same time. Get it? Good. You now have a degree in Doublethink. Now you can run for office.

This understanding reflects a sea change in Canadian values which too many recalcitrant free thinkers refuse to accept. The turning point came on election night in October of 2015, when Prime Minister-elect Justin Trudeau told a loud, cheering crowd of victory celebrants in Montreal that “in Canada you can be anything you want to be.” In other words, at that historic moment, the new Prime Minister, mandate in hand, effectively declared that there was no such thing as objective reality in this country. And, by God, after five and half years of his governance, most of us are inclined to agree with him.

In Trudeaupia, nothing seems real anymore. Money isn’t real. Mounting debt isn’t real. Chinese money-laundering and colonization isn’t real. Sky high house prices aren’t real. The ominous threat of Internet censorship by his government isn’t real. Illegal border crossings aren’t real. The collapse of the small business sector isn’t real. . The only real things are things that we can’t see with our own eyes. Like a pandemic for example. Corpses stacked like cordwood? Hospital hallways stuffed with Covid victims on gurneys? Mass graves being dug in the local park? Whatever it is, it ain’t the bubonic plague or even the Spanish flu. Guess I need new glasses. The only thing I can see is The Great Replacement. But wouldn’t you know it, I have been told that that is just a conspiracy theory. A figment of my paranoid imagination. Make that a new pair of glasses plus an anti-psychotic to go, will you…

But back to my point.

‘Progressive’ people–the psychotic phobics and Jacobin bullies who made it their mission in life to shame non-mask wearers, report illegal gatherings and ridicule vaccine sceptics–should not question the assertion of some unvaccinated people that they are in fact vaccinated simply because they imagine themselves vaccinated. They should not demand the production of a document that verifies that I have been vaccinated. After all, they are the people who tell us that we are not to call illegal migrants “illegal migrants”. No. They are “undocumented” migrants. Human beings who must be treated as citizens with the full rights of citizens until we can properly vet them, assuming that they voluntarily return to be vetted after catch-and-release. Heck, progressive people even have a problem with the notion that bona fide voters should have to present solid I.D. in order to vote. So why should they give trans-vaxxers like me a hard time?

I told you that I have been vaccinated, so accept me at my word.

However, I rather doubt that you have been vaccinated, because if you were, you shouldn’t care if I had been vaccinated or not, right? If you took the vaccine, you did so because you believe that it will offer you protection. Right? Like that double mask you were wearing after Fauci, Tam and Henry finally admitted that a single mask wasn’t worth a damn

Ah, but protection is not really what this is all about, is it? No, the whole point of the exercise is to control other people. To test them. To see how far you and the politicians you shill for far can push the envelope before we tell you to shove it up your Communist ass.

PS: Here is some homework. You parrot the phrase “herd immunity” as if you know what you are talking about. Guess what. “Herd immunity” cannot be equated with vaccines. There is no necessary connection. One does not necessarily have to vaccinate X amount of people to gain “herd immunity”. Compare how the World Health Organization defined herd immunity on June 9th of 2020 with their definition in the following November: “Why Did the WHO Alter Its Definition of “Herd Immunity?” Notice the sleight of hand? That’s the problem with independent thinking and doing your own research. It becomes a habit, and before you know it, the sheep in your social network won’t talk to you anymore. What a loss!