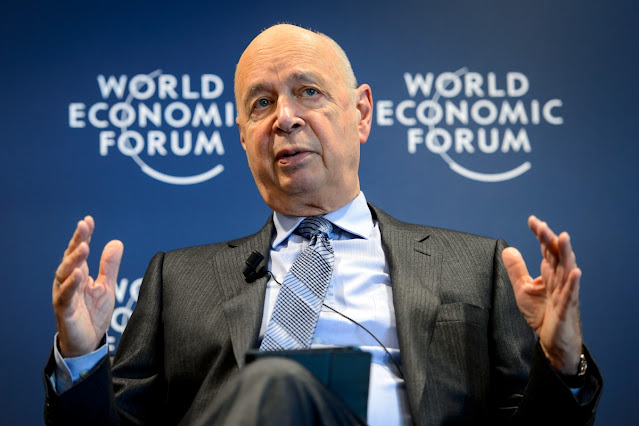 There is a new face on the block. Psychopathic mastermind Klaus Schwab, pictured above, has chosen to make our island his home.

Quadra Island residents should be excited to learn than all of the outlets that offered fresh produce sold by local island growers have now been assimilated by Great Reset Enterprises, a global corporation-state consortium dedicated to one-world solutions. And the local face of this giant corporate umbrella will be none other than Klaus Schwab.

You heard it right. Schwab the globetrotter will become Schwab the organic farmer and shop keeper. He will be moth-balling his suits and ties and donning an apron to take his place behind the counter or the farm stand to exchange friendly banalities with local island shoppers.

In other words, rather than guide the world by remote control behind a desk in Geneva, he has decided to ‘get his hands dirty’ in a laid-back rural community and work from home. It is less a career shift than a lifestyle choice.

“Gone are the hectic days of jet setting between conferences and knocking heads with the one percent, of plotting to restructure your lives beyond recognition under the guise of sustainability and the eradication of poverty. I’m going to explore my human side (if I can find it), and try manipulating minds at a grassroots level… I’m calling it Orwellian Global Fascism With A Human Face…

“All of this is possible. As long as you make them afraid first. Very afraid. Or as Americans say, ‘scared shitless…’

“You tell them that this is an emergency…that their lives are imminent danger…and you cook the stats if you need to….And of course local editors and social media moderators must do their part in censoring dissident voices as well…censorship is key to my agenda…

“And you make them feel part of the team by encouraging them to be informers…you tell them that the people who don’t comply with our rules are ignorant, selfish and dangerous…they are endangering you and everyone else… so snitching on neighbours, family and friends is their duty. And destroying civic trust is a must.

“You tell them that you are following “The Science”, as if science is univocal…and you make them believe that the only scientists they can trust are the ones that Prime Ministers, Premiers and Presidents have anointed.

“And if that doesn’t work, that is, if some of them do their own research and cite the studies of highly credentialed scientists, you just call them conspiracy theorists, and that’s the end of it…..

“These credulous herd animals even believe that I am a conspiracy theory! A figment of paranoid imaginations—-even though my speeches and pronouncements are recorded on video! It’s all there hiding in plain sight! But herd animals can’t go there…they must delegate their thinking to information gatekeepers they trust….if they didn’t hear it on the CBC, then it can’t be true, right? …

“I don’t know much about this community yet. But I can already see that much of my work has already been done. As voting patterns suggest, a good two in three people here have drunk the Kool-Aid. So much so that they were willing to offer themselves as lab rats and be injected by a so-called ‘vaccine’ that has not been adequately tested! Even the FDA hasn’t approved it! Downstream neurological problems? Who cares? I need to be jabbed ASAP or I’ll die…You’ll die too you damn fool!…

“So it won’t be hard to convince them that my vegetables are organic and that my operation is locally owned. If they believe that substantial differences exist between political parties and that private businesses are in competition with one another, then they will swallow anything. They are Canadians after all. A naïve trust in authority is baked right into their DNA…. I feel like a wolf inside a sheep pen!”