No Way Will I Stand With Doug Ford! 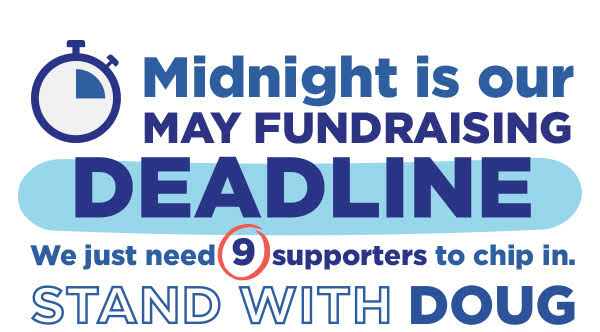 Let me get this straight: You want me to “Stand With Doug” and send some money? No way. Doug Ford has presided over the greatest destruction of citizens rights this province has ever seen.

Since March, 2020, Doug Ford has vacuumed away the Charter rights of Ontarians to freedom of assembly, freedom of worship, freedom of movement. We have gone through long periods of stay at home orders, a form of house arrest. But the victims have committed no crime, faced no charge, had no trial or an opportunity to defend themselves. They have just been punished. The Ford government has acted as if there were no Charter of Rights and Freedoms

Doug Ford closed schools, ruled one business essential and it could stay open with shifting restrictions, but another business must close. Thousands of businesses closed and ruined; tens of thousands of Ontario workers made jobless. Mobility rights, freedom of assembly, freedom to protest stomped on.

I believed in the populism of Ford Nation. My belief began to fade when Doug Ford dismissed END THE LOCKDOWN protesters rallying at Queen’s Park, many of them ardent Ford Nation supporters, as “a bunch of yahoos”.

I watched as Ontario turned into a police state. A Christian church in Aylmer had been fined over $100,000 for the “crime” of gathering together to worship the Lord. Its Pastor Henry Hildebrandt was conducting a service. His congregation were singing hymns. In strode a sheriff backed up by local police. The congregation was ordered out. The church locks changed by court order. No, this was not North Korea; it was Ford’s Ontario. Oh, and the police had blocked all roads to the church, as if engaged in some drug takedown.

Then there was Adamson’s Barbecue in Etobicoke. Owner Adam Skelly made the mistake of thinking he could serve up barbecue to willing customers. Over 100 Metro police and the cavalry descended on the restaurant to drag Mr. Skelly off to jail. The police state goon squad might have suggested a biker’s convention.

On May 23, Hamilton was the scene of something that might have been out of a Monty Python skit. Local police stormed out of a building to slap tickets with hefty fines on peaceful protesters who opposed the lockdown. The insane piece de resistance was the double fining of a Rebel reporter. He received a fine under the lying and misnamed “Re-opening Ontario Act” for being in a public gathering of more than five persons. He received a further municipal fine for shaking hands with another consenting adult. Yes, shaking hands in Doug Ford’s Ontario is now illegal.

One of the darkest days for civil rights in Ontario was April 16. The government authorized police to pull over pedestrians and motorists and demand that they justify being away from their home. It sounded like some grade B movie from the 1940s with some surly police agent demanding: “Where are your papers?” What is scandalous is that this was a cabinet decision. Doug Ford and his cabinet had met and discussed this police state measure. Sylvia Jones, a lawyer, had seen no problem with trampling the rights of taxpaying Ontarians and their right to be free from intrusive police checks? True, most police forces announced they would not be making such stops. Good, but it was Doug Ford and his band of freedom thieves who had sought to tighten police state rules on Ontarians. The announcement was walked back a little, but not entirely: Police can stop motorists or pedestrians if they think they’re participating in a public gathering of over five persons.

Ontarians can look with envy at states such as Florida or Texas. There businesses are open, restaurants are open, bars are open. Florida Governor Ron DeSantis has FORBIDDEN local governments and school boards from imposing the hated masks on people. Oh, yes, these free states are not cesspools of disease; They have lower infection rates than Ontario, which has groaned under eight months of lockdown tyranny!

And you expect my donation to further enable this tyrant!