Who Is Klaus Schwab? 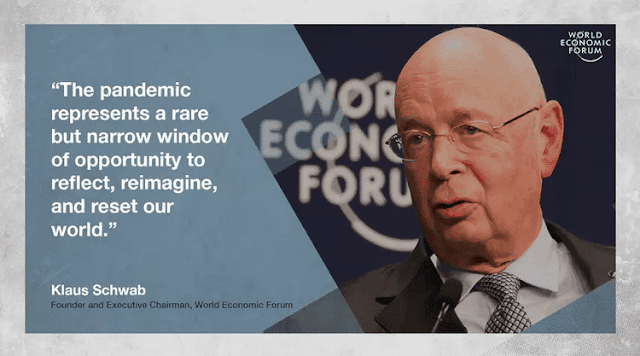 The common practice of referring to Klaus Schwab, the head of the World Economic Forum, as a Nazi may be just a red herring, perhaps pointing us 180 degrees in the wrong direction. Schwab is referred to as a Nazi in part because his father in Germany worked for the so-called Nazi party. But use of the word “Nazi” is often a sign of lazy thinking. It is nearly always used to obscure, not to clarify. In fact the term “Nazi” was not invented by the “Nazis,” but by their enemies. In any case, the word vaguely denotes “a member of the German National Socialist Party (N.S.D.A.P),” or it means “someone who thinks the way members of the N.S.D.A.P thought” – or it is just a rather meaningless term of abuse.

But the N.S.D.A.P was disbanded in 1945, so we are left largely with the second use of the word. As for the second definition: How is one to decide how those people (as opposed to some other people) thought..

The Dictionary of American Family Names lists “Schwab” as “German and Jewish (Ashkenazic).” The name means “Swabian,” “someone from Swabia,” a mountainous part of western Germany. Is Klaus Schwab Jewish? Who knows? If he is, then his last name would indicate that he is a member of the Ashkenazi, a group of Jews who lived in the Holy Roman Empire around the end of the first millennium, establishing communities in Germany and northern France in the Middle Ages. Their main language is Yiddish, a form of German. About 80 percent of the world’s Jews are Ashkenazi.

In early 2020, many (all?) of the world’s TV and radio stations were talking all day about COVID-19. Starting at roughly the same time, political leaders started chanting expressions such as “the New Normal,” “the Great Reset,” “a New Deal for Nature, “Build Back Better,” “the Fourth Industrial Revolution,” and “Do the Right Thing.” It’s hard to imagine what sort of organization could jump-start such an operation as “COVID-19” and keep it rolling for such a long time.

A curious but unanswered secondary question is how these mnemonic gems get passed down from the inner circle in Davos to the local carpetbagger politicians, and finally to ordinary citizens who proudly walk around faceless, with silly cloths fastened over their faces, a remarkable form of virtue-signaling.

The expressions being intoned were in fact the words of Klaus Schwab, with his World Economic Forum said to be creating a great new opportunity for humanity, but really attempting a massive attempt at global dictatorship. A statistically mediocre virus was transmogrified (in Schwab’s imagination) into an impending Doomsday machine. The books written by Klaus Schwab are easy to find, perfect example of “hiding in plain sight.” They spell everything out clearly, but the words still seem to pass over the heads of many people. To read them, however, one needs only to translate: “value” = money; “stakeholders” = owners; and “global governance” = global dictatorship.

The dystopia of Schwab and his friends is meant to be created largely with money, more so than with guns. Using tricks such as “lockdowns,” destroying innumerable small businesses and replacing them with mega-corporations that can do everything on-line, billions of dollars are being funneled upwards.

In Mein Kampf, Bk I, Ch X, Adolf Hitler says (with reference to Marxism), “. . . The great masses of a people . . . will more easily fall victims to a great lie than to a small one. . . .” Why does this happen, that we fall victims more easily to a big lie? Why doesn’t it go the other way around? Basically there are two mechanisms involved: “authority” and “repetition.”

Authority: most people (reverting to infantile mentality) believe that government is like God. “God would never lie to us,” we say. So then we equate “government” with “God,” which “proves” that “the government doesn’t lie.”

The second mechanism, repetition, is somewhat lower in grandeur but is nevertheless effective. As soon as the “pandemic” began, the term “COVID-19” was already being repeated about every ten seconds, or in other words about 9,000 times a day, on every station. A few months later, the term was being somewhat replaced by “vaccine.”

If each person in the world can be coerced into going around wearing a mask all day, even when at a great distance from anyone else, the evil magic is doing its work. And how will those same mechanisms of irrationality be applied in the days to come?

With vaccines, though, it’s basically another member of the World Economic Forum, Bill Gates, who’s running the show. The fact that it’s him is a big clue to how these vaccines are being imposed on the world. Gates spent many years, back with Microsoft, as one of the most bloodthirsty capitalists around, involved in endless antitrust litigation. He has no medical education and never finished university. It’s unlikely that he’s changed in any serious way. He seems to be faltering a little: he’s now divorced, at least in part because of his friendship with Jeffrey Epstein, a world-class pimp of young girls until the latter’s suicide or murder. The next major question, though, is whether the police will be coerced into rounding up all the people who refuse to have Billy’s swamp-juice injected into their veins.

Only a little reflection is required to realize that Klaus Schwab bears more resemblance to Stalin than to Hitler. Schwab’s mentor has always been Henry Kissinger, a German Jew, though a relationship of that sort would never have been true of Hitler. The Germans in the Second World War killed perhaps 15 million people. But the Communists and the Jews went hand in hand until their love affair decayed in the latter days of Stalin’s reign. The Communists have killed about 100 million people, according to René Courtois et al. in The Black Book of Communism. One has only to look at the present government of China, or even that of the US or Canada, to see that the spirit of Karl Marx is still very much with us. And Schwab is a large part of that world.