There Is A Media War Against Whites In Canada 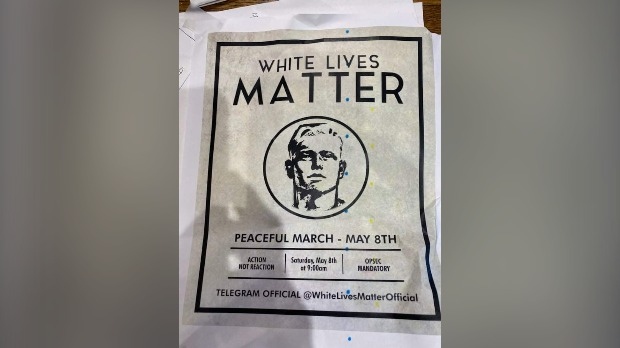 A Call To Action Against The Miscegenation  Agenda

Where do I even begin? The war against (White) Canada by means of media propaganda is so bold and so dystopian, it would when described to an outsider seem more like a work of fiction than a reality.  Yet, it is that incredulity of it all that allows the bad actors to get away with it.

For several years, and especially in the last two years, we White men of Canada have been subjected to a growing amount of visual media propaganda, usually in advertising, depicting White females in conjugal relations with Black males. These depictions have been out of proportion with the number of Canadian White women actually in conjugal relations with Black men. As of 2011, 453 005 Canadian citizens are Black men – yet, nowadays, they are depicted as every fourth person in media advertising, and they are depicted as being the conjugal partner of about every other White woman.

There is no mathematical way this could be an accident. Somebody is portraying this on purpose. It cannot be excused as some media attempt at portraying reconciliation and peace between the White and Black communities; that could be portrayed with images of cross-community brotherhood (e.g. drinking beer by a campfire), children of different communities playing sports together, and even same-sex couples of different ethnic origins (isn’t that something the media wants to celebrate nowadays). But no. The insinuation, the ideas the bad actors are planting, always involve sexual partnerships and procreation.

Only the White males of this country are subjected to this dastardly level of racist taunting. Given that our society has quickly become accustomed to hiding our faces and staying homebound based on public health orders (which are as influenced by politics as much as anything else, and politics is in turn influenced by cultural movements), it is possible that this is only the beginning. Considering the level of anti-White propaganda that federal civil employees are now being taught, almost anything is possible now in this dystopian society.

Will Whites who marry non-Whites be eligible for special tax credits (all in the name of rewarding those who fight against racism, of course) from the federal government, with benefits incrementally increasing for every child they procreate?  Will depictions of traditional White families be proscribed under Bill C-10? Will hate speech laws be expanded in order to protect the actors behind the miscegenation against from editorials such as this one?

I am reminded of psychopaths who wreak long, torturous deaths upon kittens. They prefer declawed kittens because it’s harder for them to fight back. Anything can be done to those who don’t fight back.

“White Supremacy” Is A Phony Crisis

I was irritated today by the following article from CTV Toronto: “Wilmot Township anti-racism rally in response to ‘White Lives Matter’ march sees no opposition.” This piece was written by a woman by the name of Heather Senoran. It fails basic fair journalist practice in that although two opposing parties are depicted, only one is given a voice. Senoran used CTV’s budget for this article to promote a liar named Aashay Dalvi, who organised an anti-racism rally in response to a White Lives Matter rally in Baden, Ontario.

“They told me I need to go back to my country,” said Dalvi. “Told me I look like a monkey.” Dalvi and others planned the rally after a poster circulated in Wilmot Township promoting a “White Lives Matter” march scheduled for May 8. Oppression continues to exist,” said Dalvi. “The posters are evident of that.”

Dalvi fails to provide evidence that he was described as looking like a monkey, so we have nothing but to take him at his word.  As is typically the case for Blacks accusing Whites of racist words, Dalvi fails to consider that the hardship that Whites in North America face for being accused of racism is much worse than the hardship faced by those who are called “monkeys” and the like.  He also fails to elaborate on how Whites Lives Matter equals oppression of Blacks. Thousands of Whites are raped and murdered across this continent every year, without a peep from the media about it. White lives do matter. Cannon Hinnant mattered.

“White supremacy is a public health crisis,” said Dalvi. “It is time we recognized it as it is.”

This statement is the core lie of the article. There is no empirical evidence to suggest that “white supremacy” (a term that is not defined in law) is a public health crisis. Where are all of the homes of Canadian Blacks being burned? Where are all the Blacks being tortured and murdered in Canada’s streets?  Where are all of the signs on businesses saying “Blacks Need Not Apply”? You know the truth as well as I do: they don’t exist. Whites across Canada in fact pay taxes that go to benefits for Blacks – whether they live in Canada or not; don’t forget all the foreign aid to African countries Canada contributes. Blacks reap the benefits of the White taxpayer wherever they may roam in the world.

Violence against Whites (and Blacks, for that matter) by Blacks is, on the other hand, a much more real, empirically provable public health crisis. The people of this country are held in the grip of terror of saying something or doing something that might offend a Black. Blacks Lives Matter has only encouraged this terror.

Police add that the hate crime team is still working to find the people behind the posters.

The post-script is similarly enraging. If such self-evident statements as “White Lives Matter” can be classified as a hate crime of microaggression, we not only will lose the truth, but we will lose this country.

My fellow supporters of the Council of European Canadians, I encourage all of you to get in touch with Heather Senoran, Wilmot Township, and the Waterloo Regional Police.

For Heather, politely tell her that her journalism in this piece was unbalanced and that she failed to let both sides of the issue say their piece:

For Wilmot Township, express your support for the White Lives Matter rally:

For the Waterloo Regional Police, let them know that you stand by the White Lives Matter Rally’s organisers’ freedom of expression and that policing social commentary is outside their purview:

So What’s the Plan?

There are many of us within the New Right who have been very good at diagnosing the problems.  There are, however, far fewer of us who have been able to propose any solutions. To use a metaphor, we have many paramedics and a few very good registered nurses, but so few surgeons.

In regards to the war on the White community by anonymous figures within the media industry, I think it’s safe to say that that they don’t feel particularly threatened by us, and thus they have no incentive to stop what they are doing.  Even if they did stop temporarily, they could continue any time. The only long-term solution to this problem of anonymous media figures feeding us dangerous suggestive sales is for the major media corporations of this continent to be investigated, and eventually broken up. There is too much money to be made in the news and entertainment industries, and it is becoming very bad for our physical and mental health.

This, however, is a longer-term plan.  Within the shorter term, it will become necessary for we White workers, White thinkers, and White lions to organise in order to protect our interests, as deleterious effects inflicted upon us go ignored by media and government alike.  White interests rapid-reaction groups (WIRRGs) will become necessary umbrellas this century in North America, as traditional centres of power that enforce the rule of law and common cultural norms collapse due to astronomical debt, loss of faith in official governments, and mass immigration. These WIRRGs ought to comprise everything from private shops to security escorts and Internet alternative media, in order to protect our quality of life (and our lives themselves), pool resources and share burdens and information. They will also initially need to work under the radar in order to evade anti-discrimination laws, but eventually will to have find within homogenous White communities enough popularity to evolve into ethno-cultural compacts that are impervious to infiltration and coercion alike.

I will write more on this in the future. For the time being, get your savings out of the Canadian dollar and into bullion, reliable cryptocurrencies, firearms, and assorted supplies.  Watch this space.