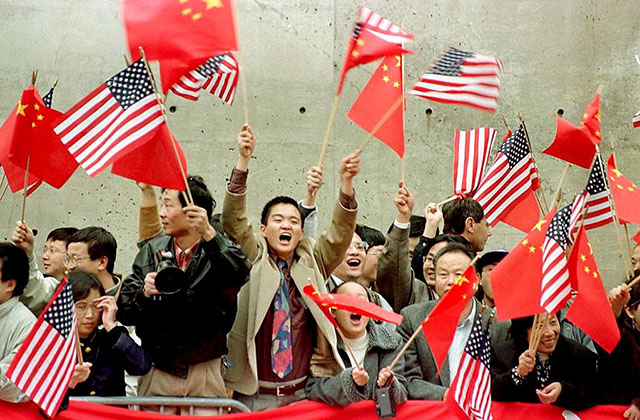 Chinese students at Harvard University welcoming a visit by former Chinese President Jiang Zemin
The Trump 2020 campaign was filled with plenty of missed opportunities. From failing to act quickly enough to clamp down on voter fraud to decisively cracking down on Black Lives Matter terrorists across the country, Donald Trump’s 2020 re-election bid represented a flaccid version of his 2016 campaign. Trump’s first presidential run was marked by vitality and a revanchist energy ready to be unleashed on the globalist, ruling class, whereas his reelection campaign felt way too much like a conventional Republican Party ad.

One of the biggest Black Swan moments of Trump’s presidency was the outbreak of the Wuhan virus. Regardless of what one thinks about the Wuhan virus and how it should have been tackled, Trump did miss an opportunity to seize the moment of panic and use it to his political advantage.

People forget how Trump ferociously attacked the ruling class for selling America out via “free trade”, thereby enabling the rise of a peer competitor in China. To Trump’s credit, while in office, he did enact tariffs on a host of Chinese goods as a response to China’s predatory trade practices. This was a realist and level-headed response to China’s plays for economic hegemony and a way to put a dent in the American ruling class’ Sinophilic trade ventures that rarely benefited America’s working class.

Nevertheless, Trump could have done more during the Wuhan virus pandemic. Democrats and their leftist fellow travelers abide by former Chicago Mayor Rahm Emmanuel’s maxim of never letting a serious crisis go to waste. Republicans, on the other hand, resort to pusillanimous pontifications about being principled — a suicidal strategy to employ against a radical leftist that is willing to draw blood. This is one reason why Trump was so refreshing once he declared his run for the presidency; he wasn’t wedded to Republican’s craven appeals to decency and respectability and was willing to stir the pot.

As a result, Trump could not grow his base in a manner that made it fraud proof against the blatant attempts by the ruling class to steal the election. His defeat has left many disappointed nationalists like myself wondering what he could have done to avoid this fate.

Personally, I believe that Trump should have continued cranking up the pressure against China. The tariffs were good policy, but Trump could have pushed the envelope even further by bringing immigration into the equation. You know, the very issue that Trump used to separate himself from the rest of the pack during the 2015 Republican primaries.

Trump could have galvanized mass support by creating an “Other” in China and calling for a complete prohibition of Chinese migration on the grounds of national security, public health, and demographic stability once the pandemic broke out. Most don’t want to admit it, but a substantial minority of Chinese migrants are notorious for advancing the Chinese Communist Party’s expansionist agenda by operating as a fifth column in the West. 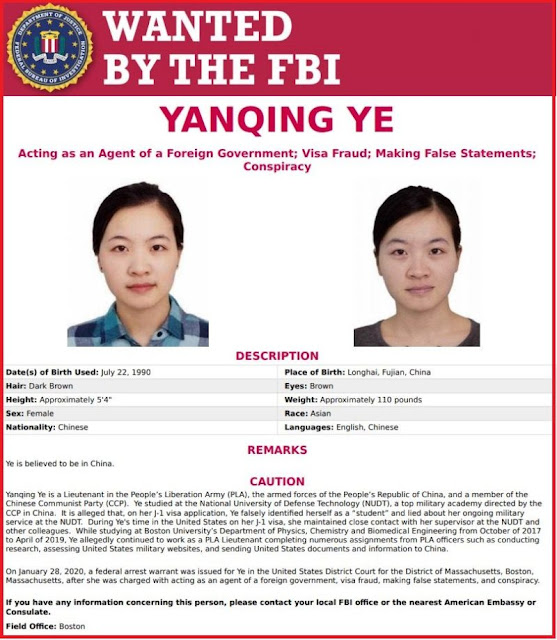 On any given day, you’ll find headlines of Chinese nationals nailed on charges of espionage or sharing sensitive research or corporate information with the Chinese government. It’s no exaggeration to say that Chinese migration to the US has a geopolitical component to it. Since China undertook various economic reforms under the stewardship of Deng Xiaoping it has emerged as an aspiring great power. One of its main objectives is to create a sphere of influence within its own backyard, which entails expelling US military assets from East Asia altogether.

At the moment, China cannot win a conventional shooting war with the US so it must turn to other means to undermine it. One way China tries to subvert the US is through mass migration, which enables it to plant one of the largest spy networks in human history on American soil. By establishing such a network, Chinese nationals would be able to carry out massive levels of espionage that could potentially close the economic and military gap between the US and China.

Chinese migrants are among the largest groups of legal migrants that come to the US. Since 2010, China has sent more legal migrants to the US than any other country. Their presence is most apparent in the university system. In any given year, there are roughly 500,000 Chinese nationals enrolled at American universities who are waiting to take American jobs in white-collar fields.

It stands to reason that a substantial number of these Chinese migrants are likely doubling as spies at American universities or are ready to engage in espionage once they join the American workforce. The US’s current open borders mania would be a boon to the CCP, who would rejoice at the prospect of turning Chinatowns into forward operating bases for its destabilization efforts, given how many CCP assets can blend in with everyday Chinese Americans living in the US.

A much more nationalist Trump would have called attention to these politically incorrect facts and drawn upon previous acts of immigration restriction such as the Chinese Exclusion Act — a law that banned the importation of Chinese scab labor. Further, Trump could have pointed to the geopolitical implications of letting hundreds of thousands, if not millions of Chinese migrants settling down in the US.

Independent voters would have naturally gravitated towards a nationalist message that identifies a foreign enemy. Many Americans, regardless of the intensity of their political beliefs, do instinctively understand that mass migration transforms normal work environments into arenas of resource competition. In the case of Chinese migrants, Americans could be working alongside potential sleeper agents with intentions of hurting the US.

The economics of mass migration are unavoidable. The glut of labor coming from abroad invariably leads to depressed wages and the destruction of any bargaining power working-class Americans previously had. At a biological level, there’s something to be said about the shock that comes about when someone notices their workplace undergoing de facto ethnic cleansing as their co-workers get replaced by foreigners. Naturally, people would prefer to work, mingle, and live with people that look like them and, ideally, share some kind of ethno-cultural bond.

All told, Trump missed an opportunity in 2020. But there’s still hope. The current Republican field looks flaccid and if Trump decides to run, he should easily coast to the nomination. Nonetheless, Trump should not forget about the raw nationalism that catapulted him to the presidency. Nationalists will have to bring pressure from below to remind Trump of the crucial issues he brought to the fore and emphasize the emergent Chinese threat. As China grows its power, its fifth columns abroad will experience concomitant augmentations.

The West has a vested interest in expelling these Chinese nationals and restricting their access to white territories. In the present, when people are beginning to become fixated with great power politics, Chinese migrants are a low-hanging fruit to demonstrate to average whites the benefits of immigration patriotism. Similar bans should obviously be applied to other nonwhites who sully the national character of white-run countries.

Going forward, Trump and his confidants should avoid falling for the same PC nonsense that has turned Conservatism Inc. into a false oppositional force to anti-white Left. At this critical juncture in American history, this country deserves an unapologetic nationalist leading the charge. Trump, despite his flaws, is the only political figure who currently fits the bill. Anything short of Trump’s 2016 platform, will only put America on the fast track to globohomo.