Canada in Decay: Mass Immigration, Diversity, and the Ethnocide of Euro-Canadians: UPDATED EDITION 2021 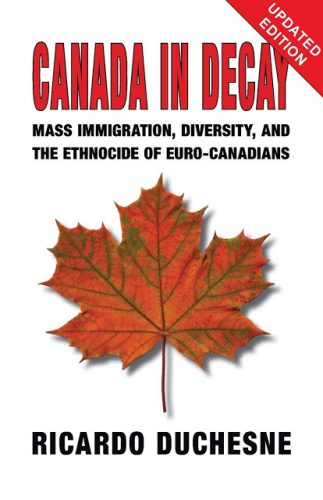 Canada in Decay was a best seller at Amazon in various key subjects the moment it was released in August 2017, consistently ranked #1 in “Emigration and Immigration,” “Canadian Politics,” and “Political Ideologies”. There were weeks in 2018 when it was ranked in the top 10 for books overall in Canada. Unfortunately, the book was also attacked regularly in social media, and in December 2019 about 70 customer reviews suddenly disappeared; and in the summer of 2020 the book was taken out of Amazon for a few months.

It continues to be ranked highly to this day. On the morning of May 6, it is ranked #4 in the “best seller” category of “Political Ideologies Textbooks” in Canada, higher than Chomsky, Marx, and Marcuse. This is so despite the total suppression of this book by all the cowardly academics destroying the minds of students.

The “Inside Look” at Amazon is still the text for the 2nd edition. Amazon (we believe they are lower level managers) is refusing to change the inside text.  But don’t worry they will send you the updated 3rd edition. The revisions from the 2nd to the 3rd edition are small, though the changes from the 1st (2017) edition to the current 3rd edition are significant. I would certainly suggest you purchase this new updated version if you read the 1st edition. I would also encourage you to purchase it for the sake of supporting the only book in Canada’s history that advocates for white identity politics.

If you wrote a customer review, and it was deleted by Amazon, you should try to send it again. Luckily, after someone warned me that Amazon was taking out many dissident books, I saved a lot of the reviews, so you may find it here.

There are some individuals out there who think this all about making money from selling books. I get a very small proportion of the money generated from the sales. The price I have paid socially, and financially, for this book and hosting CEC is far higher. I repeat, this is the only book that is critical of immigration replacement, and the only way to keep it visible to normies in Canada is to keep it on the best selling lists — that’s the point of these new editions, apart from improving it.

I understand that a few on the dissident right wanted a shorter, 50 to 100 page statement, a political pamphlet, rather than a sustained argument with lots of statistics, arguments, and cited sources. I am thinking about such a pamphlet; in the meantime I will cite some words I wrote about Canada in Decay in CEC one year after it was published explaining why it is so important for some on the Dissident Right to present our case in a more scholarly direction.

I can’t stress enough how crucial it is for our side to have a fully developed criticism of immigrant multiculturalism steeped in historical analysis, political theory, sociology and philosophical reflection. The academic books promoting multiculturalism number in the thousands located in shelves across all Canadian universities. Many of these books are crappy, written by conformists with a poor education. But they are massively influential in being the only sources students are compelled to read. Whether we like it or not, full length books and journal articles have afforded leftists with a smug satisfaction that their ideas are legitimately based on “peer review research” whereas our ideas are simple outbursts from deplorables.

The left controls the production of knowledge, all the universities, the printing presses, magazines, newspapers, political parties, corporate media, think tanks — everything. They feel assured mocking our ideas when no one in academia promotes them. Our side has a lot of mass support, some of which is starting to be heard, with quite a few blogs. But if we are going to mount a sustained opposition, reverse decades of multicultural propaganda, and all the damage done to Canada, we need high level intellectual products. No social movement has ever gained political power without an intellectual foundation, without fully developed arguments against the establishment.

Therefore, since Canada in Decay is the only fully developed argument against an establishment determined to marginalize Euro-Canadians, I urge you to purchase this book as a metapolitical act. The longer the book stays as a best seller, the more it will be purchased, the more its ideas will spread, and the stronger we will become. We must totally undermine the deceitful ideological foundations of immigrant multiculturalism.

Don’t assume that this is a tedious academic book. As one reviewer, Dr. Kerry Bolton, put it, this book “combines a scholarly method with an approachable style”. It was intended for a popular audience, unlike The Uniqueness of Western Civilization, which was strictly for an academic audience with masses of cited sources. 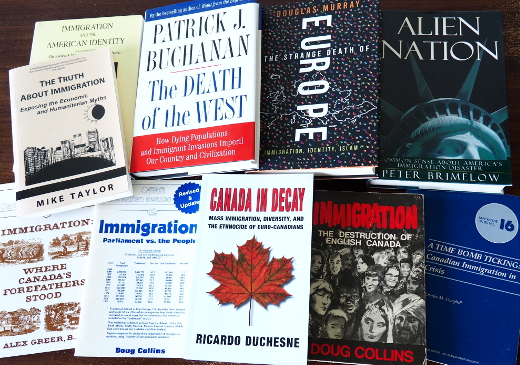 Finally, let me encourage those who already have a copy to ask your local library to order the book. As Riley Donavan explained in his article, “Why Libraries Are The Future For Euro Canadian Activism,” Canadian public libraries, according to their own mandate: “have a core responsibility to safeguard and facilitate access to constitutionally protected expressions of knowledge, imagination, ideas, and opinion, including those which some individuals and groups consider unconventional, unpopular or unacceptable”.

Ordering this book for a public library may seem small, but it means that a book advocating for the collective rights of Euro-Canadians to exist as a people will stand in libraries available to thousands of Canadians for generations to come. There are thousands of public libraries across Canada. Check this super long list of libraries in Ontario alone.