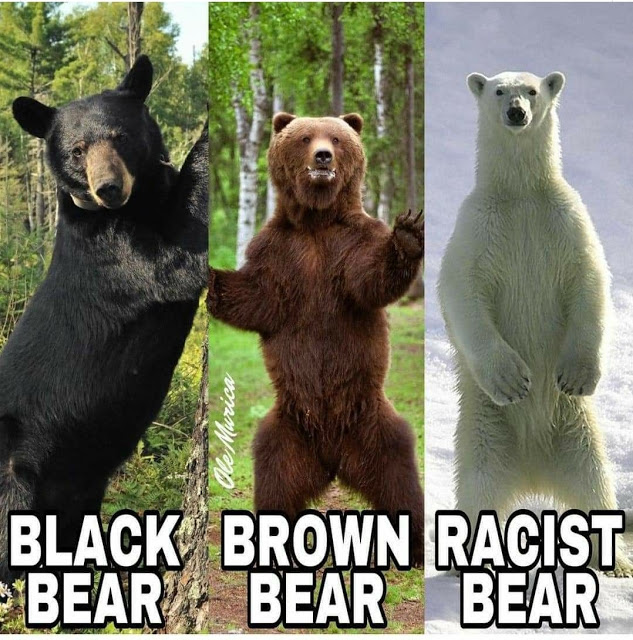 The times they are a-changin’ in the wilderness. In the past year, critical race theorists and social justice activists have trained their guns on the systemic racism which, in their judgment, accounts for the conspicuous under-representation of people of colour in the National, State and Provincial parks of North America. They maintain that there is an implicit “whiteness” in the woods, that people of colour are in receipt of an inhospitable message that is conveyed in many subtle and not so subtle ways, including the fact that the uniforms worn by park rangers are reminiscent of the uniforms worn by police officers who target them in cities.

I can’t answer to these accusations. But I do know that African-Canadian visitors to the Great Bear Rainforest in B.C., and to Churchill, Manitoba, have been made to feel unwelcome by white supremacist bears.  And it has to stop. Racial profiling in the hinterland is as unacceptable as racial profiling in urban Canada. Predators must not assume that a black hiker is there to case the joint, or a nature photographer of colour is guilty of loitering. We are all Canadians after all and it is high time that we treat each other with respect.

So what must be done? There are two standard remedies for this shameful circumstance. One is to subject these bears-of-privilege to diversity awareness and sensitivity training. Another is to arrange a focus group in the intimate setting of a small lecture theater, bears on one side of the aisle, and African-Canadians on the other. Let them hash it out and get to the root of their differences. Perhaps a Canadian version of Al Sharpton or Cornell West could be recruited as a facilitator, someone who would turn down the temperature and allow a calm and reasoned exchange. Alternatively, it could be modelled on Obama’s concept of inter-racial dialogue, where one side gets to do all of the talking and growling while the white side gets to do all the listening.

But I think that the key to truth and reconciliation between the two parties lies in the Contact Hypothesis. In a nutshell, the reason that folks and critters don’t get along is that they don’t know each other up close. And the reason for that is geography. Space. So obviously the answer is bussing. It has worked elsewhere and there is no reason that it shouldn’t work here in Canada. It is a universal truism that  “Diversity + Proximity = Harmony”. If you don’t believe me ask people in the former republic of Yugoslavia.

As a pilot project, I would propose that a dozen of these hateful bears be captured, transported and released overnight into given neighbourhoods in Ajax, Brampton and Brooks, Alberta. My guess is that soon after daybreak, all contentious issues would be settled. When these bears got to know people-of-colour on an intimate, personal level, all of their prejudices and negative stereotypes would surely vanish like a snowflake on a hot skillet. They would understand that people are people, and that beneath the surface, they all taste the same. Empathy would replace anxiety. Civility would replace contention. And instead of treating the other guy as a member of an out- group, bears and humans of colour would see each other as individuals. Both parties would learn that “We are more alike than unalike”, and that species is a social construct. So let’s give peace a chance. What’s to lose? No borders, no religion too. Just imagine.

That being said, the ball doesn’t just lie in the bears’ court. Reconciliation is a two way street. Since various initiatives have been proposed to “out-reach” to people-of-colour, I think that as a sign of good faith, park visitors of colour should reach out to white bears with a hamburger or a steak and see how that works. According to my experience, the trick is to habituate the bear to your presence, so that his unwarranted fear eventually gives way to brazen fearlessness. Then, if he spares your life, you know that you have made a friend.

Meanwhile, progress is being made. Rumour has it that Parks Canada is about to issue a statement that “there is no room for transphobia, homophobia, sexism or racism in our National Parks, either on the part of predators or Park staff.” That is why Smokey the Bear was given his walking papers last month, after allegations that he molested a cub while she was eating from an overturned garbage container. While she could not provide evidence to back up her complaint, Woke animal rights advocates allied to the Me Too movement successfully argued that a female cub must always be believed, and that the quaint assumption that the accused must be considered innocent until proven guilty must be discarded in the interests of social justice.

Park rangers must also take ownership of their failure to be more welcoming to visible minorities. For too many years recreational users of colour have been greeted with signs like “No Black Campers Allowed!” or “African Canadians stay in bounds!” One sees those signs everywhere. And yet, to our shame, we remain silent—or we attribute their low park visitation rates to other reasons. The idea, for example, that black folks in America don’t bother to visit National Parks because they simply aren’t interested in nature is a racist excuse for not outreaching to the great masses of inner city African American kids  who live for the day when they can stop throwing basketballs and instead go on nature hikes.  Anyone with a pair of eyes can see that is what black youth really want to do. An affinity for nature is built right into their cultural DNA. It is who they are.

Their conspicuous absence on the trails, lakes and mountain tops of National Parks stands as yet another indictment of white patriarchy and exclusion. It is high time that those of us with white skin (and fur) accept our blood guilt and relinquish our hold on nature to those who have yet to enjoy it.

To that end,  Social justice in the Forests, a Soros funded organization, has made a commitment to send 45,000 busloads of African American park visitors to the seven largest Natural Parks in the United States  by the end of President Joe Biden’s first term in office, each equipped with a survival pack consisting of a ghetto blaster and a new pair of Nikes. As a spokesperson for the SJF said today,

“…these visitors will serve as trailblazers for the many millions of African Americans who have long aspired to rip across creeks and corrode trails with ATVs driven with wild abandon, as white eco-vandals do….they will leave on mark on nature which will inspire minorities for years to come…serene settings that once served a venues for privileged Anglo-Saxon, German, and Scandinavian Americans who wished to enjoy quiet contemplation will soon become vibrant with the sounds of diversity… No longer will visitors have to endure the sound of birds singing or leaves rustling in the gentle winds that sweep across a pristine valley… Instead they will be enriched by roaring machines and rap music played at 100 decibels.”

Now that is a future that I can look forward to. And to think that it is just around the corner!