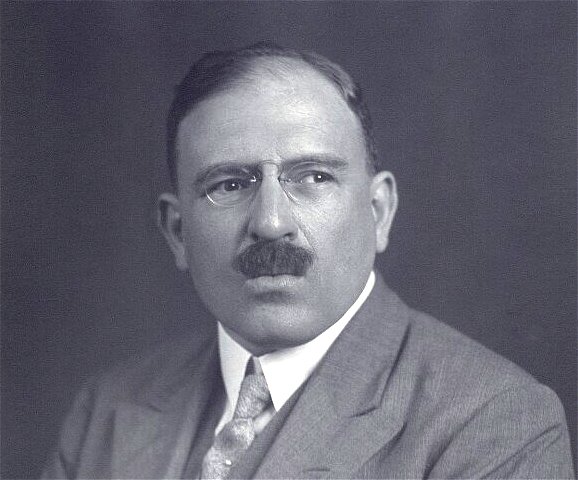 The man pictured, with the Hitler moustache, is British industrialist Sir Robert Waley Cohen (1877-1952), former Director of Royal Dutch Shell, Vice-Chairman of University College, London; Vice President of the Board of Deputies of British Jews, President of the United Synagogue, and the main creator of the Palestine Corporation.

The University of Southhampton says of his career:

Waley Cohen was involved in various international negotiations and deals on behalf of Shell, including with the Egyptian government concerning exploration rights . . . During the First World War, (he) was appointed petroleum adviser to the Army Council (and) was appointed KBE in 1920, in recognition of this work.

Sir Robert was involved in Anglo-Jewish community activities throughout his life. For nearly forty years he was a leading figure in the United Synagogue and held the office of President at his death.

He lived at his London home, Caen Wood Towers, until about 1942 when it was taken over by the Royal Air Force and used as the Intelligence Training School.

So as you can see from this brief summary, Sir Robert was a mover and shaker in the Jewish community in Britain, a big man in the international oil business, and someone with close connections to the British military and the intelligence community. His home on Hampstead Heath looked down both figuratively, and literally, on the City of London and Westminister.

So what did Sir Robert do with all his money and influence? According to Metapedia, he was instrumental in funding the British Non-Sectarian Anti-Nazi Council to Champion Human Rights (ANC), later renamed The Focus for the Defence of Freedom and Peace or simply, the Focus. This was a secretive Political Action Committee (PAC) founded in 1935 in response to a call by the Board of Deputies of British Jews in an attempt to undermine National Socialism and turn people against Germany.

I’ll turn to a reference on page 59 of the Arrow Books edition of David Irving’s book Churchill’s War, The Struggle for Power, to describe the scene at an early meeting.

On the day after the Horsham speech (July 24, 1936), the ten top members of the Anti-Nazi Council trooped into Morpeth Mansions, his London pied à terre, for a second conspiratorial luncheon. In response to Churchill’s wishes for a less negative title they now called themselves The Focus, but, cat-like, this was a name known only to themselves. The main decisions this day were to set up a research section under Wickham Steed [1] and to draft a manifesto.

There were embarrassed coughs when the organizing secretary of the ANC, A.H. Richards, inquired where the money for all this was to come from; Mr. Churchill appeared angry at the question. Richards was taken aside and asked to announce simply that all their requirements had already been met.

Funds had been arranged two days earlier at a private dinner in North London, hosted by the Board of Deputies of British Jews. It’s Vice-President, Sir Robert Waley Cohen, chairman of British Shell, was a charismatic Zionist extrovert who would become, in the words of his authorized biographer, Robert Henriques, the ‘veritable dynamic force of Focus.’

At a dinner on July 22 at his home Caen Wood Towers, he launched the initial secret £50,000 fund for The Focus. His associates signed immediate cheques for £25,000 and pledged the rest.

Calculated in 2020 Pounds, this was a start-up fund of £3,585,000; not bad for a whip-round the dinner table. OK, where else was the money to be spent? Paul Craig Roberts, writing at the Unz Review, says the recipient was none other than Winston Churchill:

Hitler’s program was to put Germany back together again. He succeeded without war until it came to Poland. Hitler’s demands were fair and realistic, but Churchill, financed by the Focus Group with Jewish money, put such pressure on British prime minister Chamberlain that Chamberlain intervened in the Polish-German negotiations and issued a British guarantee to the Polish military dictatorship should Poland refuse to release German territory and populations.

Reading this was the “ah-ha” moment for me. Yes, I realized Winston was the epitome of ambition, he sought power like a child does a candy cane. He wanted to emulate his famous ancestor Marlborough whose biography he was writing. And, I realized, after reading The Last Lion by William Manchester, he lived like a King on an M.P.’s salary. What I did not realize was that British Jews were financing his lifestyle so long as he attacked National Socialist Germany.

In short, Churchill was in the pay of people who hated Germany and would do anything to see Hitler removed.

Here’s another very prominent British Jew, Sir Henry Strakosch. Wikipedia has a lengthy biography, so I’ll only quote part of it.

He served as a financial adviser to the South African government, and was the author of the 1920 South African Currency and Banking Act. He was chairman of the South African goldminers, Union Corporation from 1924. He was a member of the Royal Commission on Indian Currency and Finance during 1925 and 1926. He later served on the Council of India between 1930 and 1937, served as a delegate for India at the Imperial Economic Conference in 1932, and acted as adviser to the Secretary of State for India between 1937 and 1942.

You can’t get much better connected than that. So what did Sir Henry do for the future British Prime Minister? The Israeli newspaper Haaretz has a review of the book, No More Champagne: Churchill and his Money by British banker David Lough. The book details how various leading businessmen saved Churchill from penury time after time.

Churchill liked the company and money of Jewish millionaires, too. One of them, Austrian-born Sir Henry Strakosch, rescued him from two major crises. On June 18, 1940, just one day after 4,000 British soldiers, sailors and civilians were killed when the Germans sank the RMS Lancastria, Strakosch wrote a cheque for £5,000 (£329,500 today).

The generous donor didn’t ask for anything in return and kept it a secret. To cover his tracks, Strakosch made out the check to one of Churchill’s close advisers, who in turn signed it over to the big guy. The new prime minister was thus able to pay off the watchmakers, wine merchants and tailors who waited patiently for their due.

Can you believe it, a day after the worst single disaster of the war, Churchill tries to hide a paper trail to an enormous personal payoff from a Jewish banker? It beggars the imagination. Almost exactly one month later, on July 19, 1940, the German Chancellor made his most important peace offer to Britain, but Churchill, now fortified in brandy and cigars, turned him down. (Actually, it’s even worse than I’m making it because Churchill was getting a dozen cigars a day from his Jewish tobacconist, J. Grunebaum & Sons, without paying for them.)

That wasn’t the first time Strakosch had opened his wallet to Churchill; that happened around the time the Germans entered Austria two years earlier. For this he received a thank-you note from Churchill: “This is only to tell you that as Hitler said to Mussolini, on a recent and less worthy occasion, ‘I shall never forget this inestimable service.'”

Haaretz doesn’t mention the sum, but a review of the same book in the Daily Mail does.

Sir Henry, a naturalised Briton born in Austria, regarded Churchill as the one politician in Europe with the vision, energy and courage to resist the Nazi threat. He had no hesitation in paying off £12,000 (about £825,000 today) of his share-trading debts [2].

Neither man ever spoke publicly about the rescue. Churchill kept knowledge of it to a very tight circle that did not include his bank or his lawyers.

Another way to put that is that Churchill was so deeply in debt, he could be bought. The paper realizes this is very incriminating because it poses the question of why Jewish businessmen were financing the British Prime Minister:

The evidence of donations from wealthy Jews could serve as fodder for hatemongers, who often claim that Jews controlled the British leader. Lough is aware of this and stresses that Churchill never gave wealthy Jews anything in return for their money. He found no connection between Jewish money and Churchill’s efforts against Nazi Germany before the war.

Well, no, but Churchill’s efforts before the war were to force Chamberlain, and then Britain, into the war. That’s about as big a payoff as anyone has obtained anywhere, for anything, in world history.

The decision point, where Churchill was the pivot on which the war turned, has come to be known as the War Cabinet Crisis of May 1940.

When the idea of negotiations was mooted on Sunday, May 26, Churchill opposed it and urged his colleagues to fight on. However, there was no consensus. Two days later, May 28, Churchill outmaneuvered his colleague Viscount Halifax, the Foreign Secretary, by calling a meeting of the 25-member outer cabinet, where his supporters had a majority, at which he gave a rousing speech in favour of war that was strongly supported. After that, Halifax gave up.

Churchill had delivered the war the Focus wanted and now he got his reward. Other rewards would follow. It has taken 80 years for this story of bribery and corruption to be fully aired.

The millions of dead from a needless war will not, however, be here to read why they died.