Why I Re-Joined The NDP 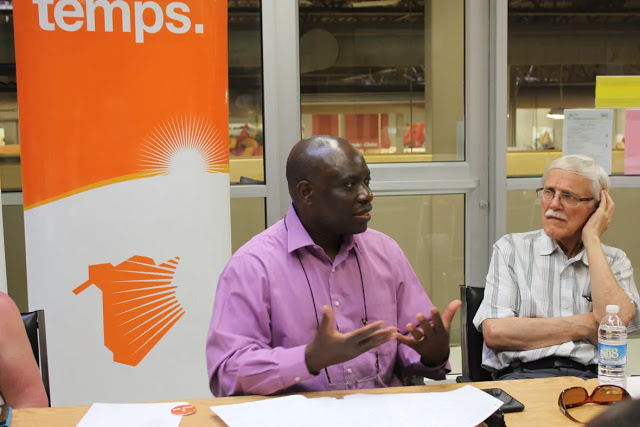 NDP candidate Cyprien Okana, who just arrived from Africa, is running in the riding of Moncton Northwest.

No doubt many of you were shocked to learn that I have “crossed the floor” and joined the ranks of the “enemy”.

NDP candidate Cyprien Okana, who just arrived from Africa, is running in the riding of Moncton Northwest. He describes himself as an advocate for diversity and social justice.

I think that I owe you an explanation. I think that I should explain why I crossed the moral Rubicon, and the long journey I took to reach that decision.

I was an NDP member for 15 years until, but by the ripe old age of 33, I lost my faith, and left the herd. The consequences were brutal.

When you embrace an ideology, you eventually realize that this ideology comes with a social network. And if you become sufficiently devoted to the cause, that social network eventually becomes your family. Your tribe. Your cocoon. So breaking with the NDP—or any other religious cult—is as gut wrenching and challenging as the resolution of an alcoholic to stop drinking. When an alcoholic stops drinking, he leaves his friends at the beer parlour behind. Cigarette smokers who stop smoking suffer the same kind of withdrawal symptoms. When they quit smoking, they not only go through a withdrawal from nicotine, but from the circle of smokers in the office building who gather together outside the building to smoke during breaks. A life time Jehovah’s Witness who is ‘disfellowshipped’, or rather, a JW who wilfully departs from the congregation, offers another example of the trauma that tribal drop-outs go through.

So when I broke with the NDP, I felt alone and confused. I lost my moorings. And then, like a bewildered lamb who wandered too far from his shepherd, I found myself in uncharted territory, and fell prey to the influence of predatory beasts. Nationalists, ethno-nationalists, patriots, free speech activists and various other devil-worshippers. You know the type. And when I became computer literate and discovered the Internet, their siren calls became louder. Then before I knew it, I was in their clutches. To my surprise, however, I began to feel a sense of belonging, and the psychological security of once again being part of a tribe. I didn’t feel like a victim or a prisoner, but a brother.

But the camaraderie wore thin. Patriots gave me too much intellectual slack. There were many times when they left me alone to think for myself. In retrospect, they were grossly irresponsible, like parents who leave their toddler at home alone without a babysitter. Finally I snapped. I couldn’t take it anymore. I felt like an agoraphobic Borg unit in solitary confinement a million miles from the hive. Or a lapsed Catholic who couldn’t extinguish the ember of guilt that was still burning in his soul, desperate to return to the confessional. So I made a resolution. I decided to return to the NDP flock, confess my sins, swear an oath of allegiance to Diversity and bear the costs of being seen and reviled as an apostate by those in the nationalist camp. Suddenly I saw the light, and became a born-again socialist . I rejoined The Party.

The benefits were immediate. Once I received my membership card, I had the ticket I needed to attend The Party’s The big revival meeting just outside the Community Hall, and mix with 200 other socially distanced comrades and frightened mice hiding behind useless masks, and be welcomed and acknowledged as one of the fold. No longer did I need to think for myself, which can be very taxing and dangerous, as all you Free Thinkers know. Alas, I could delegate my thinking to The Party, and the morally righteous priests who guide it. I could rely upon them and their surrogates in the CBC and MSM to be my information gatekeepers. What a relief!

Flush with moral universalism and pathological altruism, I left the meeting on a mission. I wanted to take down borders, report thought crimes, dox neighbours, harbour illegals with criminal backgrounds, call everybody a white supremacist and project my fascist traits on patriots. Oh, the self-righteousness of it all! What a rush! I felt like John Denver on a Rocky Mountain High. And to think that you too can experience this feeling! That’s right sinner. All you need to do is to invite Jagmeet Singh into your heart. That’s it! You’re saved! Big Brother be praised! Distopian-Hell-ejeua!

So that my friends—or former friends—is the reason I re-joined the NDP and went to that big NDP gathering.

Well in truth, the real reason was that I am carrying COVID-21.