The Homestead Family Farm Is A White Invention — 9 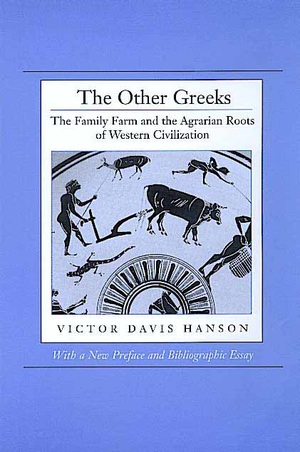 Farming was the daily occupation upon which all pre-industrial civilizations were founded. But only in Western civilization do we find a legacy of family-owned, privately held, small-to-medium homestead farms. In the ancient civilizations of the Near East, and the civilizations of the world thereafter, India, China, the Americas, the ruler and his court of blood relatives, administrators and provincial elites, owned most of the land, huge estates, from which they extracted taxes and rents from slaves, serfs, indentured servants, or faceless peasants with tiny plots owned by clans. It was Greece, roughly between 700 and 300 BC, that saw the emergence of “an autonomous group of independent farmers” for the first time in human history. This is the argument Victor Davis Hanson makes in The Other Greeks, The Family Farm and the Agrarian Roots of Western Civilization (1999).

V. D. Hanson often appears in Tucker Carlson. He is the author of many excellent books. The Other Greeks is his best scholarly work based on extensive primary research. He argues that the independent farmers of ancient Greece “were most definitely not peasants” since they “had a title to their small farms, enjoyed political rights as full citizens, took on the defense of their communities,” and were responsible for the general Greek cultural characteristics of pragmatism, confidence in the middling classes, individualism, and self-reliance” (xiv). He believes “the core values that we hold dear in the West—consensual government, civil liberties, decisive warfare, citizen armies and a distrust of militarism, private property, a free economy, separation between religious and political authority— [were] originated in ancient Greece” by independent farmers (xv). While one third to one half of the adult male population in most city states never became independent farmers because their lands were not adequately sized, V.D. Hanson insists that the farmers who were independent did exert a powerful influence over the culture of Greece, more so than the “urban intellectuals” living leisured lives, or the aristocrats with their large estate worked by dependents.

It was the phenotypically white Greeks in ancient times who originated “the idea of a privately held plot of land attached…in perpetuity to a single farm-family or oikos”(35). Independent farmers were the ones who brought (at the beginning of the polis period) “a transformation in the mind, a radical change of attitude, as farmers learned to invest their efforts in the land in an entirely novel way.” It was the yeomen farmers who brought an “alteration in the Greek mentality [which] involved a new ideology of work derived from land ownership…an idea that manual labor, time spent on the soil, was both intrinsically ennobling…[in contrast] to the well known aristocratic dislike of manual labor and widespread presence of chattel slavery” (91). Having ownership and control over one’s land encouraged individualism and free will in the sense that farmers were responsible for making their own decisions and initiating through trial and error new methods of farming.

Hesiod’s Work and Days, written around 700 BC, already embodied this “ideal of hard work”. The image that comes through this book is that the true test of manhood, of having a good character, is the ability to sustain a family farm, the willingness to postpone pleasures today, and thus have self-control and patience, for the sake of ensuring the fruits of one’s hard work in the future. These independent farmers became the backbone of the polis as they acquire citizenship and became the main source of the hoplite infantry.

This idea that the polis rested on agrarian hoplites who did their own farm work and provided for their own military equipment was reflected in Greek literature, including Aristotle’s Politics. Aristotle believed that the best form of government was one in which the assemblies were dominated by “the middle group of citizens” who made a livelihood of their own, rather than a government ruled by leisured, absentee owners of large estates worked by others, or a government held captive to the agitations of a property-less “democratic” rabble controlled by tyrants.

Why did Greece come to be culturally dominated by independent family farmers? V.D. Hanson never asks this question other than to document in a very careful way that an autonomous group of independent farmers did come to dominate the agriculture, the politics, the hoplite way of warfare, the assemblies, and the culture of Greece. One can question his argument that these farmers were responsible for the “fundamentals” of ancient Greek culture considering how many other things were originated by the Greeks: deductive reasoning, philosophy, prose analytical writing rather than mythical poetic writing. But he does make a very powerful case for the importance of family owned farms. As far as I know, no one has refuted this key component of his argument, that is, the role that family farms played in nurturing ideas about the importance of a “middling class” of farmers for a healthy state, free choice in economic activity and a self-made mentality of hard work, freedom from oppressive taxes and rents, citizen armies, and constitutional government.

This legacy of free family farms, it should be noted, was revived by the Romans, with similar effects on Roman culture, sustaining the rise of a republican form of government and a citizen army. Homestead family farms were also a key component of European medieval agriculture, and of modern Europe and of the settler states of America, Canada, Australia and New Zealand.  Only in Western history do we find farmers, the famous yeomen farmers, who owned their own piece of land and fought in citizen armies. The image of yeomen farmers as honest, hardworking, virtuous and independent played a significant role in Western republican thought. The founding fathers of the United states, Thomas Jefferson, and others, were of the view that the “yeoman farmers” were “the most valuable citizens,” the one segment of the population that could be trusted to be committed to republican values, as contrasted to financiers, bankers and industrialists with their “cesspools of corruption” in the cites.

The Ecological Basis of Family Farming

V.D. Hanson does suggest in passing, however, that the “radical changes in labor, farming technique, and [free] land tenure…were brilliant adaptations to the unique terrain and geography of Greece” (26). This terrain, with its mountains and hills, lack of flat lands, diverse soils and micro environments, discouraged “ploughing of broad expanses,” crop specialization, pasture lands for horses and cattle. It encouraged lone farmsteads dedicated to olives, grapes, grain, figs, some goats and pigs. Now, the reason I am discussing this subject is that Joseph Henrich, in chapter 7 of The WEIRDest People, says that certain ecological settings have been known to encourage agricultural practices requiring either strong clan based ties or weaker kinship ties, with different psychological profiles emerging in these different settings.

This linking of agricultural practices to psychological differences stands as somewhat of a departure from Henrich’s emphasis on kinship groups. Throughout most of history, Henrich has told us, kinship institutions (where everyone is endowed from birth with inherited obligations and tasks in relation to other members, and on the basis of which survival, marriage, work, and security depended) have had the greatest effect on people’s brains and psychology. In chapter 7, “Europe and Asia,” he continues to provide powerful data (by way of experimental surveys) showing that individuals raised in countries with higher kinship networks are indeed less individualistic and independent in their judgments, less inclined to trust individuals belonging to outside groups, and more inclined to think in terms of the context of their interpersonal relations and responsibilities within their kin group.

In this chapter he provides additional evidence showing that those regions within Europe that experienced a longer exposure to the Church’s monogamous and nuclear family program during the Middle Ages tend to be “more individualistic and independent, less obedient and conformist, and more impersonally trusting and fair today than those from less exposed regions”. These findings, he says, “hold after statistically removing the effects of people’s income, education, religious denominations,” and despite “differences in national wealth, governments, or social safety nets”. Southern Italy today has higher rates of nepotism (and near zero rates of blood donation to strangers) because it has higher rates of cousin marriage because, unlike northern Italy, it was far less exposed in the Middle Ages to the Church’s family program.

But then Henrich brings up evidence pointing to psychological differences “within China and India” based on differences in the intensity of kinship resulting from ecological differences in the type of farming, rather than from differences in exposure to some monogamous-nuclear family program. Wet rice cultivation requires a lot of cooperation by clan based groups to construct and maintain irrigation canals, dikes, and terraced fields, as well as many laborers for weeding, fertilizing and replanting seedlings, which encourages “tight-nit, top down” clan based ownership of the land.

Participants (in the experimental surveys) coming from regions where a higher proportion of the land has been devoted to paddy cultivation are more inclined to exhibit ingroup cronyism and contextual (interpersonal) thinking and value judgments. In contrast, participants from Chinese provinces where there is less paddy cultivation are more inclined to think analytically and show less ingroup favoritism. This same pattern, he adds, has been confirmed in studies about India: “regions that engage in less paddy rice cultivation are more analytic and less nepotistic”. The participants in these surveys were university students, not actual farmers. So the findings show that those students “whose ancestors were more reliant on irrigation agriculture are now less individualistic, more concerned about adhering to social norms, and more serious about inculcating obedience in their children”.

To be sure, Henrich’s argument is not that different agricultural practices resulting from different ecological settings have produced different psychologies. It is that variations in the degree of kinship intensity resulting from different types of agriculture based on different ecologies have resulted in psychological differences. The factor that is leading to psychological differences is still the nature of kinship, except that the Church is no longer identified as “the cause of the variation in intensive kinship or psychology”. Henrich also notes that these variations in psychological profiles within China and India are “relatively small compared to the impact” of the Church, which “nearly annihilated Europe’s clans, kindreds, cousin marriage, polygamy, and inheritance norms”.

Why does Henrich ignore the effects variations in the ecological settings of Europe (both within and between this continent and Asia) may have had on the intensity of kinship groups? It is only towards the end of this chapter that he speculates whether the “regions of northern Europe” “may have faced somewhat less resistance” against the Church’s family program because their kinship based institutions were “more diffuse” to start with. He wonders momentarily whether “the rain-fed, wheat growing regions of northern Europe” engendered weaker kin-based ties. That’s all he says. We will see in the next commentary that the ancient Greeks also practiced monogamy. V.D. Hanson does not consider monogamy and the extent to which these family farms were freed from wider kinship networks. But the monogamous “family” nature of these “independent” farms is implied throughout his argument. And it stands to reason that if they were privately held by monogamous families, we have a very powerful case for the existence of proto-WEIRD tendencies in ancient Greece.