THE GREATEST OF ALL TIME

On Sunday night, I found myself at a local Super Bowl party. I went for the food, drinks, and camaraderie. I barely watched the television, usually getting sidelined into a conversation about the election, work, kids, etc. Still, I wanted Tom Brady to win. At one point, a Kansas City Chiefs fan complained loudly that the refs were “giving Brady the trophy” after a penalty call went in his favor. I watched the replay. It was a good call (defensive holding). As a few others and I defended the call, the KC fan – a White guy in a Mahomes jersey – sneered, “It’s because Brady is White.” Since it was neither my friend nor my party, I disengaged and went back to chatting about whatever over scotch.

But I agree – Tom Brady was getting the calls from the referees because he is White, but not for the same reasons the KC cuck lamented.

I grew up playing American football. I loved the sport. I loved the hitting… the strength… the speed… the grit required to play and win. Muddy games were the best games – the dirtier, the better. Back in the 1980s, when I played in high school, we played “iron man” football (i.e., both offense and defense). I was a linebacker and a tight end, sometimes doubling up as a full back. I preferred playing defense. Scoring a touchdown was fun but bringing punishment up the gap was so much better.

As I got older, I watched more football and fell in love with both college and professional ball. I spent far too many weekends downing six-packs, eating crappy food, wearing a jersey, and yelling at players, referees, and coaches as if they would finally hear me. In hindsight, it was sad. I still watch college football (SEC: Go Dawgs!) but thankfully, the NFL that absolutely hates me for being a White, Christian male broke me of an unhealthy addiction. Today, my NFL jerseys largely collect dust.

Getting back to Tom Brady, there is something that Tom Brady has done for twenty years that is a characteristic of all great pocket passing quarterbacks – and it explains why he kept getting the referees to give him favorable penalty calls: a great pocket passer will speak to his team in the huddle; he will hear about defenders in the secondary getting too ‘grabby’ or aggressive; then, he scans the field from behind his protected pocket, and when he sees his receiver getting grabbed or pulled, he throws in that direction. It is an easy flag to get, coming with an automatic first down and either five yards or, in the case of pass interference, the same yardage as a successful pass. Tom Brady is the best at exploiting an aggressive defense. Suddenly, after a few penalty calls go his way, the defense gets less aggressive and then he throws to his open tight ends and wide receivers – who are no longer getting grabbed. 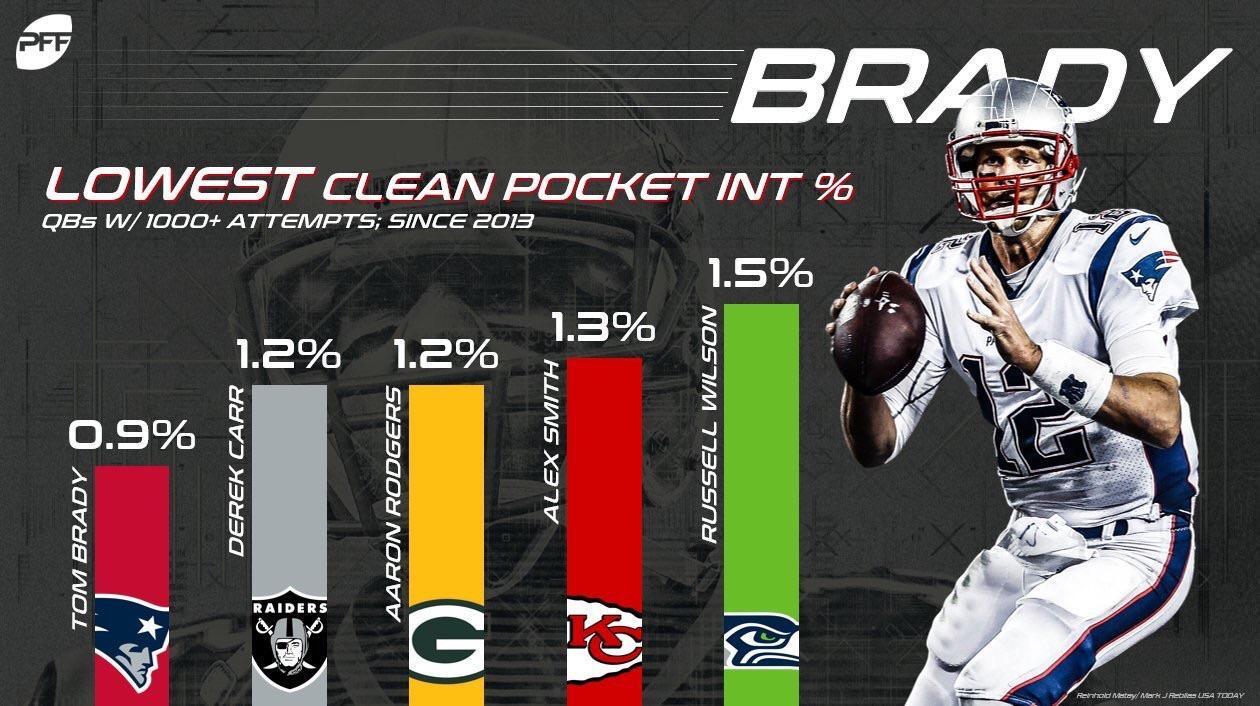 Pocket passers are field generals in every way. They are directing the team. They are watching the refs, defenders, players, coaches, and fans. The amount of cerebral capacity it takes to process so much stimuli in so short a period of time is astounding. They are applying the hours they studied of film and game plans to matters occurring in real time, within seconds. It also takes extraordinary restraint. You must process, analyze, interpret, and execute in seconds while trusting that the men coming to crush you will be stopped by the five men in front of you. In short, the ideal pocket passing quarterback is intelligent, studious, disciplined, and athletic.

In other words, the ideal pocket passing quarterback is White.

In the past twenty years, since the ascendancy of the mobile (mostly black) quarterback, Tom Brady, Peyton Manning, Eli Manning, Ben Roethlisberger, Nick Foles, Joe Flacco, and Trent Dilfer – White pocket passers – won 16 of the past 20 Super Bowls. Of the other four winners, Patrick Mahomes, Russell Wilson, Drew Brees, and Aaron Rodgers – one is mixed (Mahomes), one is black (Wilson), and two are White “dual threat” quarterbacks (Brees and Rodgers – pocket passers by design, but are known for running out of the pocket) – neither of whom is a true “mobile quarterback.” In other words, only one black quarterback and one mixed quarterback have won a Super Bowl in the past twenty years. Mahomes plays more like a dual threat quarterback as well (largely to protect him from injury).

Black quarterbacks are athletic – of that, I have no doubt – but they lack the mental acuity and restraint that White quarterbacks enjoy. Michael Vick was exciting to watch. He was also a failure in life and the NFL.

Not lost on me is the fact that Tom Brady took over a team, the Tampa Bay Buccaneers, that only a year earlier was led by a black, mobile quarterback with a criminal history (Jameis Winston). That team had a 7-9 record and missed the playoffs. The next year, Tom Brady took that same team to the Super Bowl. The team he left, the New England Patriots, replaced Tom Brady with a mobile black quarterback (Cam Newton). They ended the season with a 7-9 record and missed the playoffs for the first time in twelve seasons.

Thus, going back to the reason that Tom Brady has emerged as the Greatest of All Time – with seven super bowl rings, ten super bowl appearances, and a smoking hot wife – has everything to do with his race. The KC cuck was not wrong. The refs were giving preferential calls to Brady because he is White. But they were not doing so out of some silly systemic racism myth. They were doing so because Tom Brady, the White pocket passing quarterback, enjoys the intelligence, capacity, discipline, and athleticism to make them give him those calls. Tom Brady is capable of thinking and acting at the same time.

Consequently, Tom Brady’s career is the epitome of White Privilege – as in, he is privileged to be White.