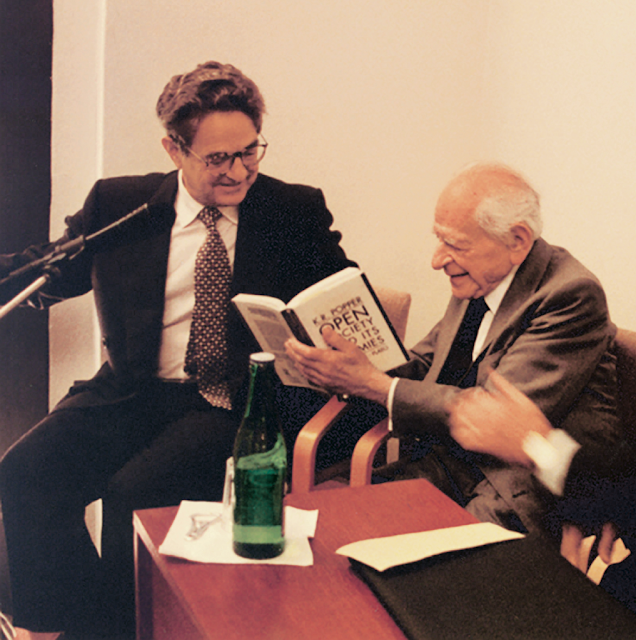 Everyone knows that Soros’s Open Society Foundations continually donates millions and millions of dollars to a wide array of left-wing activist groups, think tanks, environmentalist groups, including Media Matters, Black Lives Matter, the National Council for La Raza, and Antifa. What some don’t know is that Soros’s idea for an “open society” was conceived through his study of the Austrian-born Jewish philosopher Karl Popper. Popper was Soros’s professor and personal mentor during his attendance of the London School of Economics after he fled Hungary in 1947 for England. What barely anyone knows is that Popper’s work, The Open Society and Its Enemies, was an attempt to discredit European national identities.

The standard interpretation is that The Open Society, judged as one of the “100 Best Nonfiction books of the 20th century,” was an indictment of both “totalitarian” fascism and communism. But since fascism had been defeated in WWII when this book was published in 1945, and the United States and the former Soviet Union found themselves facing each other as the two superpowers in the world, it was Popper’s condemnation of totalitarian Marxism and communism that drew the attention of journalists and academics. This is how I recall this book as an undergrad student at McGill in the early 1980s. This book was published in two volumes: “The Spell of Plato” and “The High Tide of Prophecy: Hegel, Marx, and the Aftermath”. Plato was identified as the founder of the philosophical principles of “totalitarianism” and “the closed society”. Hegel was identified as the founder of fascism and “the modern myth of Blood and Soil”. And Marx was identified as the founder of communist totalitarianism.

Recently I read the second volume of this book, and what struck me is the total contrast in Popper’s portrayal of Hegel and Marx. Most of this volume (about 320 of 400 pages) is about Marx, and these pages can be categorized as a fairly balanced, scholarly treatment. The lone chapter on Hegel, however, is incredibly hostile, a long rant about “the charlatan Hegel,” the “windbaggery” of much of German philosophy, and the “intellectual dishonesty” of Hegel’s followers. Popper hated Hegel for framing his idealist philosophy of freedom in German nationalistic terms rather than in cosmopolitan terms. He admired the internationalism of Marx. Here is one of the opening paragraphs on him.

Marx opened and sharpened our eyes in many ways. A return to pre-Marxian social science is inconceivable. All modern writers are indebted to Marx…His open-mindedness, his sense of facts, his distrust of verbiage, and especially of moralizing verbiage, made him one of the world’s most influential fighters against hypocrisy and pharisaism. He had a burning desire to help the oppressed, and was fully conscious of the need for proving himself in deeds…His main talents being theoretical, he devoted immense labour to forging what he believed to be scientific weapons for the fight to improve the lot of the vast majority of men. His sincerity in his search for truth and his intellectual honesty distinguish him…He saw in knowledge a means of promoting the progress of man (1971, p. 82).

What the Open Society Hates

You cannot understand the influence Popper had on Soros if you concentrate on what The Open Society and Its Enemies says about Marxism and “totalitarian communism”. When Soros observed a few years ago that the West was on “a decade-long detour from our route to complete global democracy,” leading to the rise of “tribalistic, authoritarian” and “closed” societies “in Trump, Brexit, and the ascents of various populist figures in continental European politics”, he was thinking through what Popper wrote against “Hegel and The New Tribalism”.

This is the title of the chapter on Hegel. Reading this chapter offers a revealing intellectual background into the driving motivation behind Soros’s appropriation of Popper’s concept of an “open society”. By “open” they don’t mean a society that is “pluralistic” and “open to different viewpoints” (as the media deviously tells its readers). They mean a Western world that hates its European national identity, is totally open to mass immigration, and non-white identity politics yet “closed” to whites who care about their national heritage. 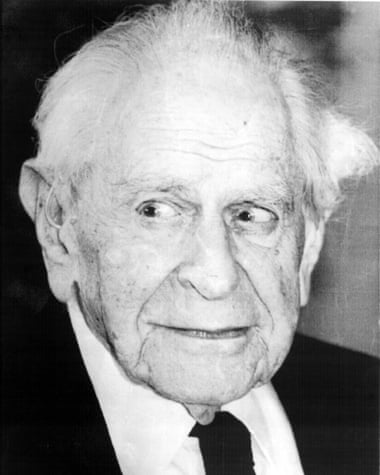 Popper looking at his adoring white fans after he achieved guru status.

I will let Popper speak for himself via a series of passages from this chapter on Hegel.

Hegel opposes liberty and equality, so he opposes the brotherhood of man…by a totalitarian nationalism…Nationalism appeals to our tribal instincts, to passion and to prejudice, and to our nostalgic desire to be relieved from the strain of individual responsibility.

Even if anyone knew what he meant when he spoke of nationality, it would be not at all clear why nationality should be accepted as a fundamental political category, more important for instance than religion, or birth with a certain geographical region, or loyalty to a dynasty, or a political creed like democracy.

The principle of the national state is not only inapplicable but it has never been clearly conceived. It is a myth. It is an irrational, a romantic and Utopian dream, a dream of naturalism and of tribal collectivism.

It was Fichte who provided German nationalism with its first theory…Fichte’s career as a philosopher was from the beginning based on a fraud…I mean not only the appalling fact that the windbag Fichte and the charlatan Hegel are treated on a level with men like Democritus, Pascal, Descartes, Spinoza, Locke, Kant, J.S. Mill, and Bertrand Russell, and that their moral teaching is taken seriously.

Hegel’s hysterical historicism is still the fertilizer to which modern totalitarianism owes its rapid growth. Its use has prepared the ground, and has educated the intelligentsia to intellectual dishonesty. We have to learn the lesson that intellectual honesty is fundamental for everything we cherish.

The modern myth of Blood and Soil…Hegel + Haeckel is the formula of modern racialism…the quasi-biological conception of Blood or Race…Nearly all the more important ideas of modern totalitarianism are directly inherited from Hegel. [In Hegel] nationalism…is the incarnation of the Spirit of the state-creating nation (or race); one chosen nation (the chosen race) is destined for world domination.

Hegel not only developed the historical and totalitarian theory of nationalism, he also foresaw the psychological possibilities of nationalism. He saw nationalism answers a need—the desire of men to find and know their definite place in the world, and to belong to a powerful collective body. At the same time he exhibits that remarkable characteristic of German nationalism, its strongly developed feelings of inferiority, especially towards the English.

One of Hegel’s feats was the revival of the Heraclitean idea of fate, and he insisted that this glorious Greek idea of fate as expressive of the essence of a person, or of a nation, is opposed to the nominalist Jewish idea of universal laws, whether of nature, or of morals…Hegel’s conception of man…is a typical tribalist ideal.

Opposition to European “tribalism” and “nationalism” is the single most important aim and function of the Open Society Foundations, created in 1993, and the Foundation to Promote Open Society, created in 2007. Between 2000 and 2018 these two organizations combined $10.6 billion. They donated about $9 billion over that same period to leftist causes generally, and to anti-nationalism causes in particular. Just last year, Soros “pledged a billion dollars to set up a university network to fight nationalism.”
It is hard to keep up with the numbers, some estimate that Soros has transferred $18 billion of his fortune towards funding the idea that all Western nations must be “open” to diverse races and cultural Marxist principles; and that, all in all, since 1984 he has given the Foundations over $32 billion.
One thing is certain. Soros does not give his money to charitable organizations. Soros has been known to sneer at white billionaires like Warren Buffett and Bill Gates for meekly “giving to the poor,” lauding his own model as “far superior”: using his vast wealth to undermine tribalism in the West and convert whites to “open societies,” including “gaming the redistricting system to favor Democrats in congressional and legislative elections, saturating federal courts with ‘Progressive’ judges, restoring voting rights for felons, providing amnesty to illegal aliens”.

How wonderful it would be for white identity politics if we could get a minuscule of Soros’s funding!