Why Libraries Are The Future For Euro Canadian Activism

I happened upon a pamphlet in my local public library in British Columbia which made me realize that community libraries are the perfect avenue to disseminate our dissident pro-Canadian message.

The pamphlet, titled “What’s that doing in my library?” proclaims that “intellectual freedom is an essential part of democracy” and that libraries in BC “strive to include materials that represent the broadest possible range of ideas and points of view”.

This is not limited to BC. At the beginning of the pamphlet, they include a statement from the Canadian Library Association, which represents 57 000 library workers across the country, that is even stronger in its unequivocal defense of viewpoint differences. I found the full statement on their website, and I will quote the relevant section in full:

Libraries have a core responsibility to safeguard and facilitate access to constitutionally protected expressions of knowledge, imagination, ideas, and opinion, including those which some individuals and groups consider unconventional, unpopular or unacceptable. To this end, in accordance with their mandates and professional values and standards, libraries provide, defend and promote equitable access to the widest possible variety of expressive content and resist calls for censorship and the adoption of systems that deny or restrict access to resources. 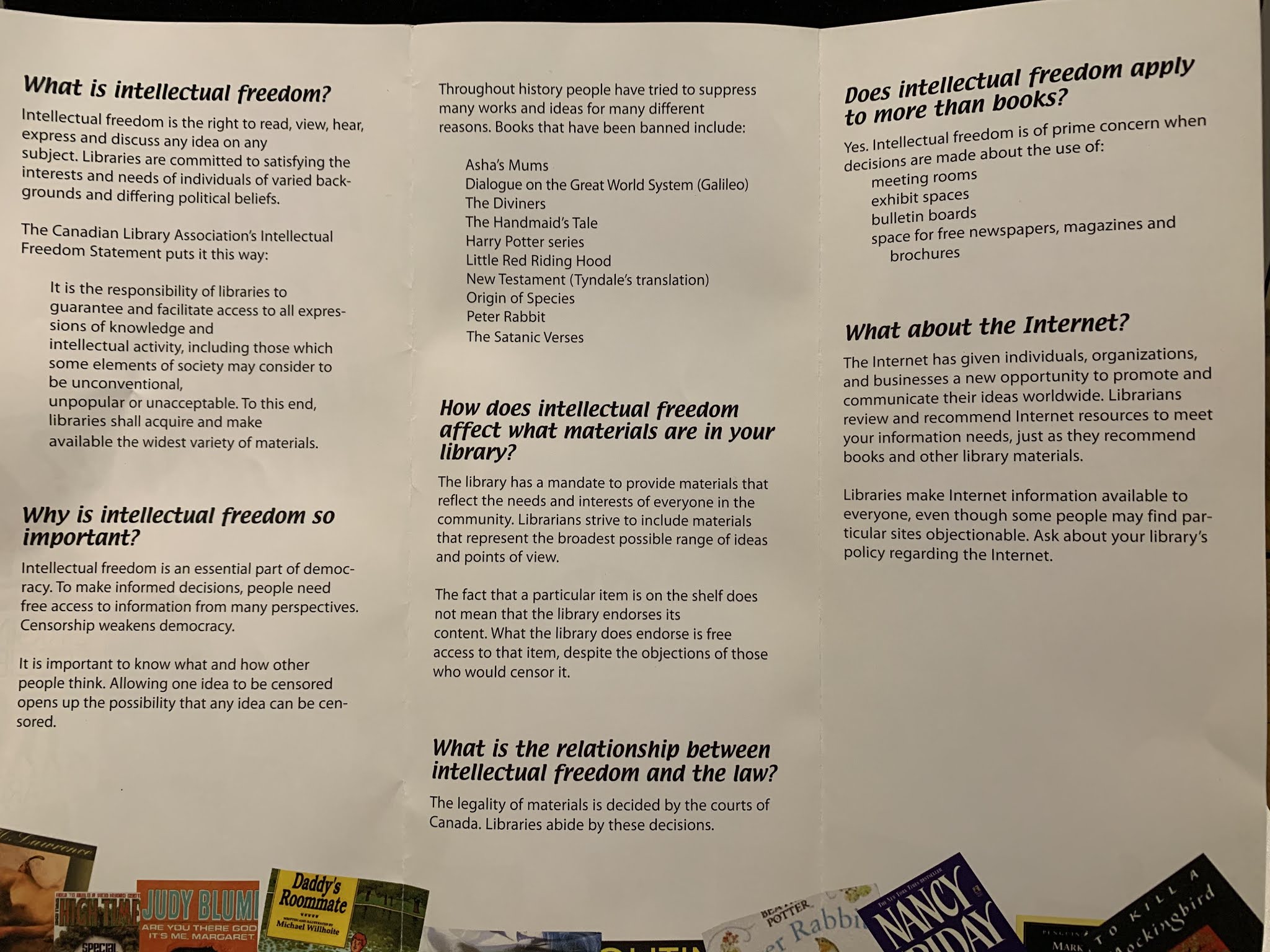 Taking the official policy of the Canadian Library Association at face value, one logically concludes that the dissident right has the right to donate our books to be put on shelves. The “constitutional” provision in their statement is not a restriction we need to worry about, since the freedom of expression provisions in Canada’s constitution are very broad. Although there has been a push to restrict speech in Canada through human rights tribunals and at times the federal government, the “constitutional” provision about library books probably most likely only applies to something violent or overtly ‘hateful’.The most important phrase here is that the association defends access to all ideas, even those which are considered “unconventional, unpopular, or unacceptable”. Today people like us who advocate immigration restrictionism, pride in Canada’s history, admiration for the country’s past, and a desire to preserve Canada’s ancestral identity are unconventional, unpopular, and unacceptable.

The library associations of Ontario and Alberta have similar statements, and the Canadian Federation of Library Associations maintains that “Only the courts may abridge freedom of expression in Canada”.

Nationalists must capitalize on the intellectual freedom provided by public libraries.

This rather long explanation of the intellectual freedom of Canadian libraries is meant to encourage the reader. The dissident right in Canada and across the West is so intensely persecuted by Big Tech, media companies, academia, workplaces and governments that we often fall into the trap of assuming that no sphere of society is safe for activism and that the only option is to give up.

We must not give up on reaching the hearts and minds of Canadians. As we are increasingly pushed off of Twitter, Facebook, and Youtube, the logical next step is to step up our in-person activism (although we should never willingly abandon the internet). Libraries are an excellent avenue for this real-world activism because of their strong defense of intellectual freedom, as outlined above.

So how does this work practically? The most obvious way to use libraries to our advantage is to donate books. Most people who find out the true nature of multiculturalism and mass immigration begin their journey down the rabbit hole by seeing a tweet, a poster or a news article. Their interest is piqued and they search out more information. Copies of Canada in Decay by Duchesne and Lament for a Nation by George Grant in libraries could ignite this same process.

So, if your library accepts book donations for their shelves and you have an extra copy of an edifying book that you are willing to part with, then that is a great option – just make sure that this type of donation is an option at your local library (you wouldn’t want to donate a book and then have them sell it in a book sale). Donated books should be optical, interesting, and lead the reader to question multiculturalism and the devaluation of the West. Here is a brief list of possible books.

Donating books is just one way to spread the dissident message in your library. According to the pamphlet I read, the intellectual freedom of libraries also applies to meeting rooms, exhibit spaces, bulletin boards, and space for free newspapers, magazines, and brochures.

Essentially, the possibilities are endless. If you want to start a dissident organization such as a book club, your library cannot refuse you a meeting room without breaking their own policy. If you want to put out posters on bulletin boards or put out a brochure about the economic costs of immigration, go right ahead. Perhaps several pages of eurocanadian.com articles could just be printed out in a newspaper format and put in the free newspaper section!

Of course, I know that this type of activism will often be looked down upon and even blocked by left-wing library employees – they are government workers after all. Despite this, the library remains an excellent avenue for in-person activism and should be capitalized upon by nationalists in Canada.

The goal of our movement is for European Canadians to proudly assert their identity in defiance of the globalist academic, corporate, and political establishments which seek to extinguish Western culture. It seems fitting that the intellectual freedom of public libraries, a quintessential expression of the spirit of the West, can be used to thwart their plan.