Serving The Vancouver Canucks With My Divorce Papers 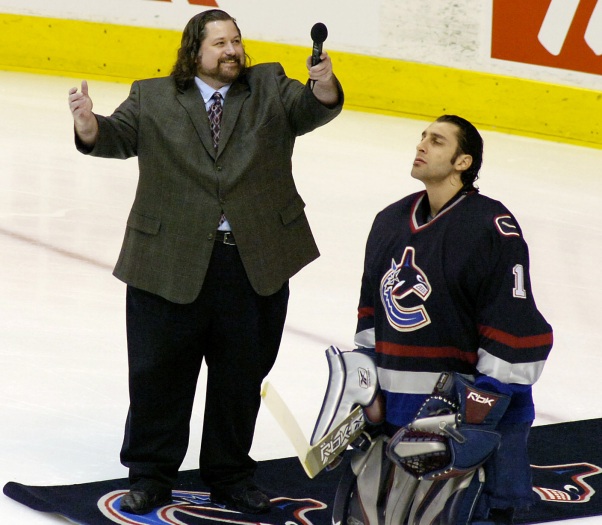 Mark Donnelly, the man made famous for his rousing renditions of the national anthem before the hometown fans of the Vancouver Canucks, made a mistake. He exercised his constitutional right to lend his voice to an assembly of citizens who met to challenge the COVID protocol. Keep in mind, his error did not consist in publicly supporting a cause, but in publicly supporting a cause which his employer disagreed with. Donnelly committed a “Thought Crime”.

The punishment was swift, and utterly lacking in grace or class. Instead of conveying his displeasure with Donnelly directly in private, club owner Francesco Aquillini took to twitter to point out to the world that Donnelly was not the singer, but the “ex-singer” of the Vancouver Canucks. He was cut loose. Just like that. No respect. No loyalty. No honour. Instead, as is the custom these days, it was left to a flack to extrapolate. The corporate and government world abounds with flacks, a parasitical class of silver tongue masters of drivel and deceit whose net contribution to society is inversely proportional to their inflated salaries.

When a corporate employee or associate is summarily sacrificed on the altar of righteousness you can bet your life that a high-price “communications” spokesman stands ready with a grovelling press release in hand. You know the kind. They sound like pre-fabricated, computer-generated form letters that can be easily applied in any damage control effort to protect the company’s image by throwing an offending employee to the wolves. We have heard and read so many of them in recent years that by now most of us almost know them by heart. They go something like: “Mr. (blank’s) views do not represent what our organization stands for…we at (blank) are fully committed to the values of diversity, inclusion and tolerance and we take our responsibility to the community of which we are proud to be part of very seriously.”

A few tweaks here and there and the generic template can be customized to fit the occasion. In the midst of COVID hysteria, the tweak in this case would be “safety”. It’s all about “safety”. How many totalitarian measures in the course of history have been enacted in the name of public safety? Safe workplaces. Safe spaces. Safe speech. We must all be made safe. Safety first, you know. And if you don’t understand that, then we’ll just have to engineer another false flag catastrophe, won’t we?

So here is what you must know.

Mr. Donnelly is unsafe. His views on mask wearing are unsafe. His open disregard of COVID rules is unsafe. Forget the virus. The real fear is that his message of non-compliance might prove viral. If they see a maskless Mr. Donnelly attend a non-mask rally, and sing and speak without a mask, Canadians might be encouraged to recover their spine and assert their rights too. This is something that our corporate and political masters cannot abide. They sense a growing subterranean bubble of rage and skepticism against a COVID regime that has failed to yield the results originally promised. They know that there is a limit to our patience—and our credulity. They know that they must nip our discontent in the bud before it erupts into massive defiance. They reason that people like Mr. Donnelly must be fired, and governments must beef up law enforcement and hike fines. We must be brought to heel before it is too late. Largely unsubstantiated claims and irrational fear cannot be indefinitely sustained. TV commercials and endless pronouncements by Saint Henry and Saint Tam do not suffice. Ultimately, the velvet gloves must come off. COVID after all is the excuse, the end game is CONTROL.

What has been dubbed “the cancel culture” is nothing new. It is as old as totalitarianism itself. Enemies of the state have been cancelled in a number of different ways. Some are crude and primitive, others not so much. Victims have been shot, gassed, imprisoned, exiled or made to disappear. But destroying reputations and livelihoods works just as well.

“McCarthyism” was the “cancel culture” of the 50s that resulted in the blacklisting of performers and writers who were accused of having ties to the Communist Party, like the infamous “Hollywood Ten”. In the following two decades, the “Left” led the charge against this injustice by waving the banner of free speech. That’s right, in those days it was the Left, the “progressives”, who championed free speech and expression. They fought for the right of people like Lenny Bruce and Larry Flint and Angela Davis and Pete Seeger to express themselves as American citizens are entitled to do. The ACLU was of course, in the vanguard of this fight. Hard to believe it, but it’s true. The American Civil Liberties Union once cared about free speech. For everybody.

But fast forward to this century, and it has been the Left which has become the party of censorship, blacklisting, politically motivated job termination, and ostracism. The Left drives the bus of contemporary “Cancel culture”. After all, they won the Culture War. The tables have turned. They are the establishment. They control the faculty rooms, the boardrooms and the editorial rooms of the Anglophone world. And we of the ‘Resistance’ are the counter-culture.

So it turns out that it was never about “free speech” after all, but about power. When Leftists formed the “counter culture” they were on the outside looking in, intent on breaking down the door. Now they have broken in and taken over. Ironically, in both cases, in both eras, corporations were part of the establishment coalition. In the 50s and 60s, they supported ‘conservative’ causes, but now they are on the same team as their useful idiots on the “Left”. Wall Street and Silicon Valley have joined forces with Cultural Marxists, BLM, Identity groups, the MSM, the arts community and the entertainment industry — especially professional sport.

Ah yes, professional sport. Those of us who follow it see it as an escape, a guilty pleasure to take our minds off our daily tribulations. It is, or was, a needed distraction. No more. Now it is among the most potent weapons in the social justice arsenal, a vehicle for incessant propaganda.

Just as the Soviet Red Army hockey team was constituted as a symbol of Communist supremacy, NHL franchises have become the purveyors of the ‘soft’ totalitarianism of woke capitalism and intrusive government. The slogans of the social “justice’ movement and identity politics not only adorn hockey uniforms, ice surfaces, rafters and score clocks, but are mouthed by the commentators who participate in post-game interviews and between-period panel discussions. There was a time when these people talked about hockey. Now they talk about white ‘privilege’. The snivelling weasel, Ron MacLean, is the quintessential mouthpiece of this ascendant world view. In an attempt to remain relevant to the mindless Millennials and social media addicts who follow the sport, this contemptible cretin threw his long time friend and colleague Don Cherry under the bus once it became clear that Cherry was done and political correctness was the official ideology of Hockey Night in Canada. MacLean chose opportunism over loyalty and cloaked his treachery and careerism with social justice advocacy. That is what makes MacLean a role model for up and coming sports journalists and commentators everywhere. Sports for sports’ sake or entertainment for entertainment’s sake is Old Think. The New Breed understand that sports must serve the Revolution.

It is no wonder that this generation, far removed from the sacrifices which their grandparents’ made on their behalf, has so little understanding of what liberty really means. Free speech means nothing if it is only to be accorded to those we agree with. And constitutionally stipulated rights mean nothing if employers and witch hunters can consign employees to the bread line for exercising them. Not a week passes when we reminded that all of us are but one tweet away from ruin. Is this what “The Greatest Generation” died for? Do I wear a poppy to commemorate the heroism of Ron MacLean and Francesco Aquillini?

Mr. Aquillini’s reflexive response to Donnelly’s heresy is sadly representative of a contagious mentality of intellectual intolerance that now pervades once robust democracies across the Western world. His summary excommunication of Donnelly suggests that he is just another instrument of oppression, a willing executioner. A shameless collaborator with a nose for public relations who saw an opportunity to showcase his corporate social ‘responsibility’ by axing a popular figure who dared to contest the fraudulent science of Tam and Henry. But that kind of behaviour has become standard, hasn’t it?”

By terminating the club’s relationship with singer Mark Donnelly, Francesco Aquillini has revealed his true colours. He has a made statement. The statement that a citizen should lose his job if he dares to express an opinion that challenges official orthodoxy. The fact that this opinion was expressed outside the workplace, is irrelevant. In the ‘tolerant’ Canada of 2020, an employer should feel no compunction in punishing him.

Well that was Aquillini’s statement. Now here’s mine: