Will Durant, Cultural Marxism, and The Lessons of History 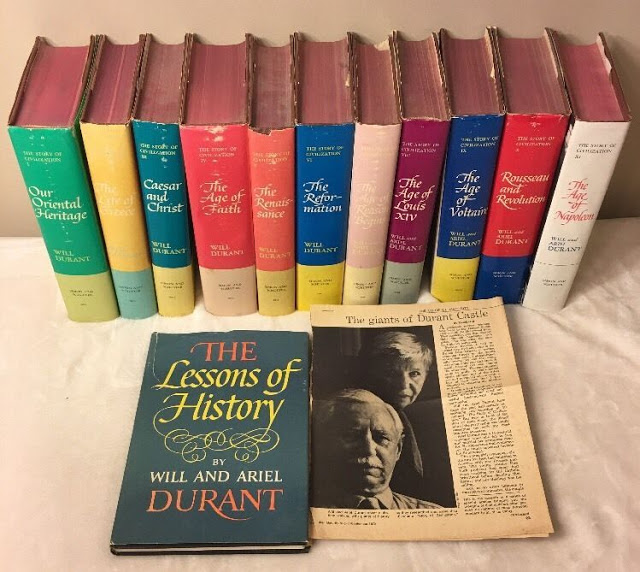 One of the foremost questions of our times is whether liberalism (or the idea that individuals should enjoy the same legal rights) inevitably leads to cultural Marxism. In my efforts to answer this question I have been surprised at the “extreme far right” ideas that liberal scholars held a mere few decades ago.

Among the liberal authors/books I have read in this regard is Will and Ariel Durant’s The Lessons of History. This short book was published in 1968 after Will and his wife Ariel had spent fifty years completing the massive 11 volume work, The Story of Civilization. (Ariel appears as a co-author of five of these volumes). In this short book they decided to tell readers what they had learned about history after writing such a sweeping account. They asked themselves whether they had learned anything about human nature or whether they had found any “regularities in the sequence of past events” that could allow one to “predict the future actions of mankind”.

The racial consciousness of their answers is quite palpable from the beginning when they note that a central feature of the “story of civilization” since ancient times is “the white man’s ascendancy”, and when they ask whether “Oriental fertility, working with the latest Occidental technology, [will] bring the decline of the West?”

In a chapter on “Biology and History” they tell us that “the first biological lesson of history is that life is competition” and that humans “are subject to the processes and trials of evolution, to the struggle for existence and the survival of the fittest to survive”. Today even historians identified as “conservative” would not dare use the phrase “survival of the fittest” for fear that they would be summarily identified as “social Darwinians”. The official definition of “social Darwinism” university students are compelled to learn very early in their studies is that:

Social Darwinists believe in “survival of the fittest”—the idea that certain people become powerful in society because they are innately better. Social Darwinism has been used to justify imperialism, racism, eugenics and social inequality at various times over the past century and a half.

This idea was drilled into my brain the very first month I arrived at Dawson College in Montreal. The Durants belonged to a different generation of liberals comfortable with race realism and social Darwinism. While historians and social scientists today, including biologists, can’t stop repeating that “cooperation lies at the heart of human lives and society,” the Durants calmly tell their readers that

co-operation is real, and increases with social development, but mostly because it is a tool and form of competition; we co-operate in our group—our family, community, club, church, party, ‘race,’ or nation—in order to strengthen our group in its competition with other groups.

Keep in mind that Will and Ariel Durant were “extremely popular,” widely acknowledged by literary elites, winners of many prizes and honors. Something fundamental has changed. Liberalism today means BLM. In contrast, for these authors, another lesson of history is that “inequality is not only natural and inborn, it grows with the complexity of civilization…Utopias of equality are biologically doomed”.

Another lesson of history “is that life must breed”.

Nature has not use for organisms, variations, or groups that cannot reproduce abundantly…She does not care that a high birth rate has usually accompanied a culturally low civilization, and a low birth rate a civilization culturally high; and she…sees to it that a nation with a low birth rate shall be periodically chastened by some more virile and fertile group.

Imagine teaching this lesson in a “liberal arts” college today, while offering current statistics on the fertility rate of whites in comparison to the fertility rates of sub-Saharan Africans, backed by some statistics and images of wild packs of African migrants arriving in Europe. What an enlightening lesson!

There is chapter with the title “Race and History”, and the first sentence reads: “There are some two billion colored people on the earth, and some nine hundred million whites”. Then the next sentence brings up none other than Comte Joseph-Arthur de Gobineau, identified by Wikipedia “for developing the theory of the Aryan master race“. Without any disparagement or qualification, Will and Ariel Durant tell us that Gobineau’s An Essay on the Inequality of the Human Races (1848) divided humanity into distinct races “inherently different in physical structure, mental capacity, and qualities of character,” followed by a full quotation from this Essay about the Aryan race:

Everything great, noble, or fruitful in the works of man on this planet, in science, art, and civilization, derives from a single starting point, is the development of a single germ…it belongs to one family alone, the different branches of which have reigned in all the civilized countries in the universe…History shows that all civilization derives from the white race, that none can exist without its help, and that a society is great and brilliant only so far as it preserves the blood of the noble group that created it.

We get a few more quotations such as: “Peoples degenerate only in consequence of the various mixtures of blood they undergo”. Or: “Only those who are themselves the product of such feebling mixtures talk of the equality of races”. The Durants sum up Gobineau’s philosophy without any critical remarks: “All strong characters and peoples are race conscious, and are instinctively averse to marriage outside their own racial group”.

Then we get brief statements about Houston Steward Chamberlain and Alfred Rosenberg, and some quotations from Madison Grant’s The Passing of the Great Race (1916) about “the branch of the Aryans which he called Nordics,” and about how Grant “predicted” that by the year 2000 “the Nordics will have fallen from power, and with their fall Western civilization will disappear in a new barbarism”.

Will and Ariel do distance themselves from a purely racial theory of history, and do bring up the influence of climatic and geographical factors in the divergent paths of different races. In the concluding paragraph of this chapter they write that “nearly all peoples have contributed to civilization”, with the observation that “many American Negroes have risen to high places in the professions, arts, and letters in the last one hundred years despite a thousand social obstacles”. They were liberals, after all. Their lessons of history are also about religion, morals, and government.

In the chapter “Government and History” they observe that “if equality of educational opportunity can be established, democracy will be real and justified”. For although “men cannot be equal, their access to education and opportunity can be made more nearly equal”. This is not a cultural Marxist observation. The claim by liberals nowadays is that our schools and universities, after decades of radical leftist politics, are systematically racist, and that “anti-racism” requires the abolition of equal grading standards for different races.

All in all, the lessons reached by the Durants go against almost everything we are now taught in our universities. One of the deepest lessons they offer is that one cannot deduce from the course of history the notion that we are heading towards a final stage of peaceful harmony, and that achieving a state of  tranquility and comfortable affluence actually engenders its own problems, the degradation of human character and vitality. There is no end point in history. The source of creativity, honor, and strength of character is division and conflict. “Even a philosopher, if he knows history, will admit that a long peace may fatally weaken the martial muscles of a nation”. A nation that surrenders itself to luxury, will also surrender itself “to corruption, and a restless disorder of family and morals”.

“Is Progress Real?” Without denying that the average standard of life has increased substantially, and that “the idolizing of savages…is an impatient expression of adolescent maladaptation,” the Durants conclude that, since human nature has not changed substantially, “all technological advances will have to be written off as merely new means of achieving old ends — the acquisition of goods, the pursuit of one sex by the other (or by the same), the overcoming of competition, the fighting of wars”.

These are the lessons we need in our classrooms instead of the brutalizing stupidities our children, teenagers, and young adults are forced to hear about how whites are supremacists unless they celebrate their replacement by foreigners.