Over 400 Thousand Immigrants Per Year Becomes The “New Normal” 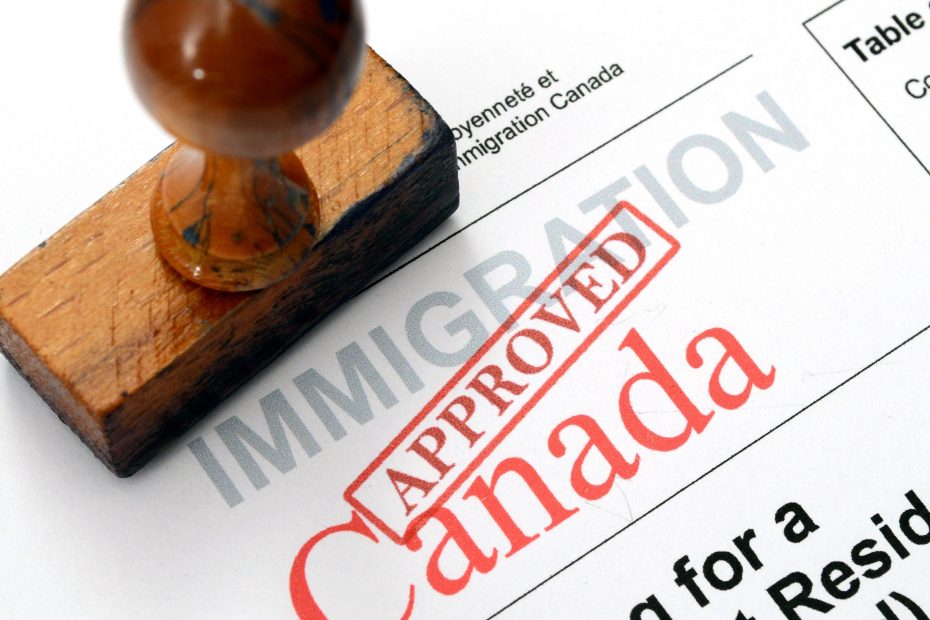 I am not known for optimism when it comes to the matter of immigration, but even I was not expecting this. The Trudeau government announced its 2021-2023 Immigration Levels Plan today, and they are raising annual immigration to 400 000 in 2021.

Canada has accepted more than 400 000 immigrants annually only once, in 1913. But the federal liberals made it very clear in their announcement that this is not a one time thing, this is the new normal. But wait, the numbers grow. The announcement today projected immigration levels for the next three years, and as you can see from the chart below, annual immigration rises to a projected 411 000 in 2022 and 421 000 in 2023.

In true neoliberal fashion, the vast majority of these immigrants will come via economic immigration programs, about 60% of the total. The remaining 40% leaves space for plenty of family reunification visas and refugees. Those coming in with economic visas can of course sponsor family later on, leading to an endless self-reinforcing flow of immigrants to Canada.

The logic behind this unprecedented rise in immigration is that it is essential to “short-term economic recovery and our long-term economic growth” according to Immigration Minister Marco Mendicino. If you’re confused about why bringing workers to Canada during a recession helps the economy, I’m with you.

But he didn’t say immigration would help the economy, workers, living standards, GDP per capita, or to lower home prices and rent. As I wrote in another article recently, economic immigration is a net negative for all of these things. Mendicino said flooding Canada with workers would help economic growth, meaning that it will increase the overall amount of consumption and productivity in Canada.

When normal people talk about the economy, we never mention corporate technocratic terms like consumption and productivity, because they have very little relevance to our actual economic well-being. More people buying Chinese junk at dollar stores doesn’t lower rent. But there is one group that just can’t have enough consumption of cheap consumer goods, and they’re the same group that has fought against working Canadians since confederation: big business.

The business sector welcomed the announcement of higher immigration levels. Goldy Hyder, president and CEO of the Business Council of Canada (which represents some of the country’s largest companies) rejoiced that the government’s plan would “inject new dynamism into our economy”. The Business Council has been described as Canada’s most powerful lobbyist group. 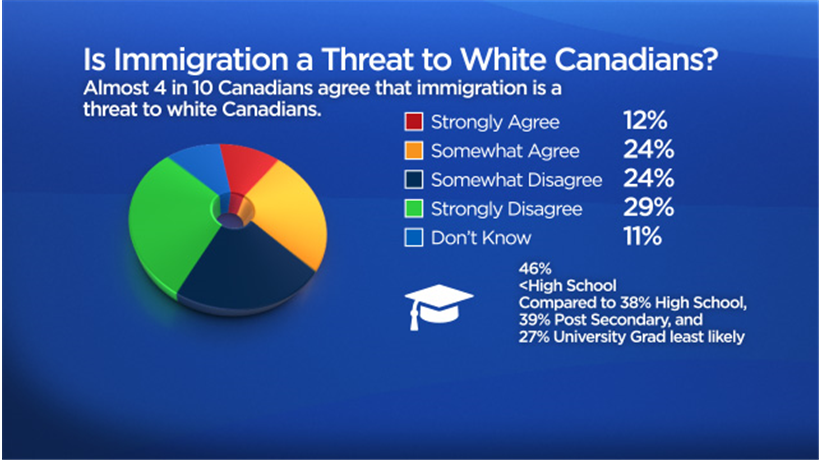 Dennis Darby, CEO of the Canadian Manufacturers and Exporters (CME), which represents 2500 of Canada’s leading manufacturers, went further by saying that the numbers should be even higher. I looked into CME further, and it turns out that they lobby hard for immigration.

On CME’s website, they call for allowing 500 000 economic immigrants annually, in addition to the refugee and family categories. I wonder how manufacturing workers feel about their bosses lobbying for expanding the labour pool to suppress their wages.

These three categories, economic, family, and refugee, can be broken down further. Of note are several new categories based on region that have only been added relatively recently.

The Rural and Northern Immigration pilot is projected to rise to 10 250 annually in 2023. This program will allow nominated immigrants to come from abroad to work and live in such towns as Claresholm (Alberta), Sudbury (Ontario), Brandon (Manitoba), the West Kootenays in BC (Trail, Castlegar, Rossland and Nelson), and Moose Jaw (Saskatchewan).

This, to me, is perhaps the most tragic detail in the Immigration Levels announcement. Anyone who knows rural Canada will immediately know why. The towns on the list are incredibly small relative to Toronto or Vancouver, and as such have a very fragile local character that has been built up over generations.

Businesses and farms are often passed down in families, people have pride in their town, and appreciate the unique culture of their area. Large-scale immigration has already eliminated the distinct character of Canada’s big cities, and it would be a crime to do this to our countryside.

Take the town of Claresholm, which has a population of just 3700, the majority of which originates from the British Isles or Western Europe. It wouldn’t take very many immigrants from Asia or the Middle East to overwhelm the unique culture of this prairie town. The music, festivals, food, building style, beliefs, accents and mannerisms would all change.

Why does Claresholm need diversity?

Another program aimed at increasing immigration to rural Canada is the Atlantic Immigration pilot program, established in 2017 by the Liberals. The program allows economic immigrants to move to New Brunswick, Nova Scotia, Newfoundland, and Prince Edward Island. It is projected to reach 6500 annually by 2023. Like the Northern and Rural pilot program, the numbers are low but when examined in the context of the small populations of rural areas, it becomes obvious that these are programs that will radically alter the character of small town Canada.

These regional programs point to the second big motivating factor behind the Liberal party’s embrace of mass immigration: we need to take them at their word when they say they want to fundamentally change our demographics.

Canada was 96% European as late as 1971. Because of mass immigration, this percent was reduced to 72% in 2016, and will be under 50% in the early 2030s. The Liberal party views this as an unmitigated good and wants to quicken the process. Indeed, in Marco Mendicino’s 2020 Annual Report to Parliament on Immigration the Immigration Minister rejoiced in Canada’s ever growing diversity:

In 2016, immigration originating from Africa surpassed European immigration, and this trend continued in 2019. Each wave of immigration contributes to the growing ethnic, linguistic, and religious diversity in Canada (2020 Annual Report to Parliament on Immigration).

No other line more clearly encapsulates immigration to Canada under Justin Trudeau. Ottawa is purposely changing the character of our country. There is nothing more sinister than transformative demographic change engineered by government bureaucrats.

Although there is a strong argument to be made that up until perhaps the mid-20th century Canadian civil servants were in the bureaucracy for patriotic reasons, we can’t trust today’s government sector to draft policy that is in line with Canadian interests. New hires are molded by the doctrine of diversity in their post-secondary education and are ultimately under the direction of politicians. The politicians are either believers in social justice, under the influence of pro-immigration business lobbyists, or too scared to speak out.

Other motivations are worth thinking about, such as how ridings with the most recent immigrants voted Liberal by a landslide or how some of Trudeau’s top advisers are from a shadowy organization which wants to raise Canada’s population to 100 million.

We can even conjecture that Trudeau Jr is merely following in the footsteps of Trudeau Sr, a man who’s derision towards (and desire to transform) traditional English Canada is not as well-known as his sneering attitude towards traditional Quebec:

English Canadians, with their own nationalism, will have to retire gracefully to their proper place, consenting to modify their own precious image of what Canada ought to be. If they care to protect and realize their own special ethnic qualities, they should do it within this framework of regional and local autonomy rather than a pan-Canadian one. (The New Treason of the Intellectuals, essay by Pierre Trudeau).

There are interesting and unique motivations behind Trudeau’s embrace of mass immigration, but the other major parties are no different. How did they respond to the latest immigration announcement?

The NDP said that it didn’t go far enough, calling for permanent residency for temporary foreign workers, international students with job offers, and even illegal immigrants. The Green Party seems to have not noticed that a change to immigration was made, with neither their official immigration critic or party leader making any announcement whatsoever. The Conservatives offered a meek response about how the Liberals will need to process immigration applications quicker if they want to raise numbers to 400 000. Only Maxime Bernier offered a strong response, tweeting in all caps “SAY NO TO MASS IMMIGRATION!”.

Do Not Go Gentle Into That Good Night

It’s hard to understate the importance of the announcement that, despite a plague that eliminated millions of jobs and 1 in 10 Canadian businesses, the radical top-down immigration programs we have been experiencing are only going to get worse. The worst thing you can do, however, is let it discourage you.

There are only two outcomes. We lose, and Canada becomes a true post-national state, in which our ancestral culture disappears as our European population becomes a small and vilified minority. Or we wake people up, we restrict immigration, and we say firmly that we will not allow our beloved country to change.

If you fight and we lose, you will be satisfied that you did all that you could, and our resistance to globalism will become an example for other nations who still have a chance. If you fight and we win, then you will have been part of perhaps the greatest, most patriotic, struggle in our country’s history.

So, when your town council announces that it is participating in a regional immigration pilot program, go to the public meeting and ask why they are stealing jobs from Canadians. Donate to their opponents – or run against them yourself. When they allow migrants anyways, film the buses bringing them in and post it on Youtube. 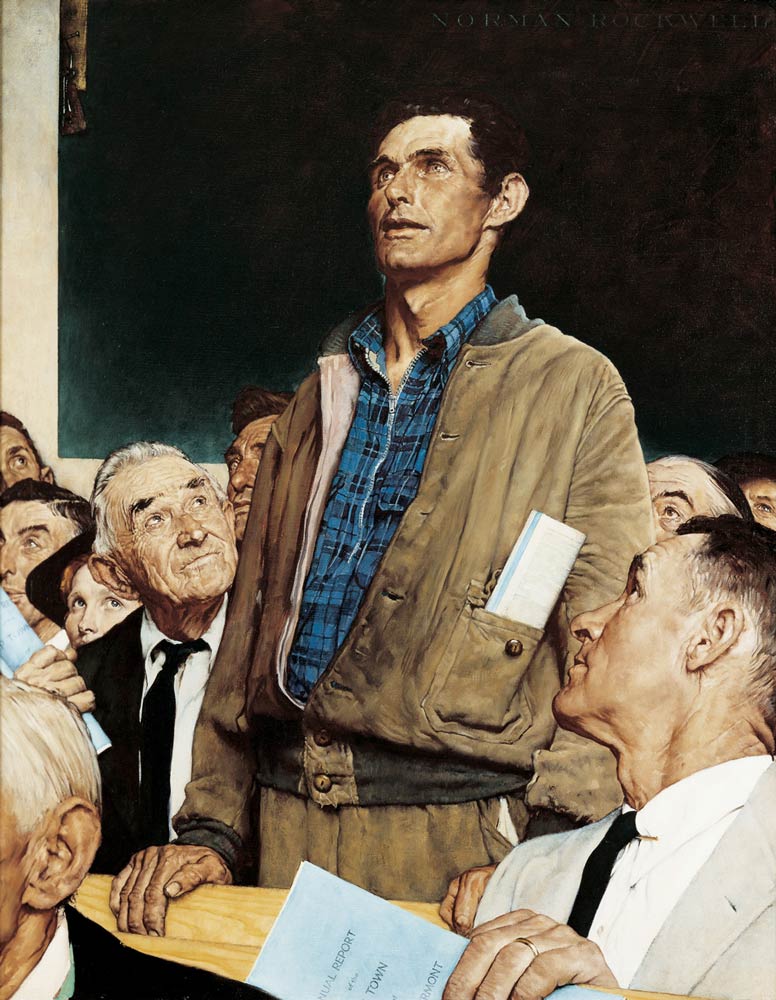 Freedom of Speech – Norman Rockwell
When your local church announces that they’re sponsoring Muslim refugees, write a letter to the newspaper asking why a church is exposing the town to terrorism by taking in the same people who are persecuting Christians in the Middle East.Boycott businesses that you know hire temporary foreign workers and tell your family and friends to do the same. Put up “It’s Okay to be White” posters or make your own patriotic posters and stickers if you have the artistic skills. Join your local chapter of the People’s Party and volunteer for them in election years. If you know enough like-minded people, start a Facebook or in-person group where you discuss patriotic ideas.
Be peaceful, be smart, be safe, but don’t let your country be sold out without a fight. As the poet Dylan Thomas instructs: “Do not go gently into that good night. Rage, rage against the dying of the light”.