Why I Stopped Caring About Israel Or The Palestinians 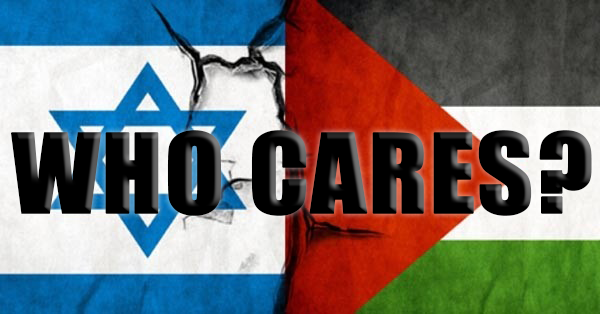 In the life of everyone there are things that concern us without really concerning us. The performance of “my” sports team, what neighbours think, who killed Kennedy, or the amount of iodine in salt (it’s enough) or fat in milk. Or some other of the trillion things we are getting daily told by the media that needs our special attention above anything else.

But there comes a time when one realizes that one cannot longer afford the luxury of unlimited awareness to everything. This is bound to happen because while unnecessary shit is endless in this world, time is not. Time is the essence and the one commodity we will surely ultimately run out of. So our patience with certain things decreases with the years and that is actually a sign of wisdom and life experience.

Since we can remember, Westerners are as used to news updates on how things go in Israel/Palestine as to the weather report. But what skin do we have in the game? The Israeli-Palestinian conflict is what I call the “it conflict” of world politics: It is mostly only known for being known.

Some years ago, I decided following the events down there is not worth my time anymore. Here is why:

1. This Is Never Going To End

Middle Easterners have their beefs to a different time standard than Westerners. Remember, this is the world region where states and thus proper war first emerged in history. Some oriental peoples have been around for thousands of years. They have survived because of a long collective memory and extraordinary stamina. These peoples certainly won’t be told what is in their best interest by short-attention span American presidents or babbling Eurocrats. The fight between Jews and Arabs over the Holy Land began long before me, and it will almost certainly continue after me.

So why should I particularly care? It’s like skipping hundreds of episodes of a telenovela and then discovering that the storyline hasn’t changed one bit.

2. There Is No Right Or Wrong

I once read a well-researched book, still on my bookshelf, that had assembled all the important legal documents on the conflict since the late Turkish period: Ottoman regulations, British decrees, UN resolutions. I came to the realization that as far as international law is concerned both parties have legitimate claims to the land. The already confusing situation is complicated by the fact that international law as such developed simultaneously to the conflict and sometimes only in reaction to it. Of course, both sides are citing only from documents that suit them to sway international opinion. But once you did your homework and see through their agenda, it is a waste of time to further engage with these repetitive arguments.

The Palestinians are the apparent underdogs, but do they deserve sympathy for this role? It only needs a glance at the map to see a Muslim sea engulfing Israel and to realize the considerable geostrategic advantage they enjoy. Even the last weed smoking peacenik senses that the Palestinians would drive the Jews into the sea the instant they could. Arabs are ruthless and cannot share. They want the holy places of Jerusalem all for themselves, even though the city is only their third most important religious site and the historic Muhammed never set foot into it.

At the same time their brethren are flocking uninvited to our cities and, quelle surprise, here too they voice demands as if they were the master of the house.

And for the plight of these impertinent people am I supposed to care?

4. Israel Only Thinks Of Itself

Israel is the only country in the Middle East that is a democracy and has a rule of law. And it has both to such an extent that even its Arab citizens enjoy a reasonably high standard of living and security. Proof needed? Why were the Israeli Arabs the only ones that remained quiet during the Arab Spring? Because they secretly knew that the Jews were better at managing their existence than the Arab kleptocrats in the shithole countries around.

But make no mistake. Arabs are still considered second-class citizens in Israel. The IDF do not want them to join (nor do they), and hardly a month passes before some Jewish politician or official voices concerns about being outbred in wombfare. If Jews considered all citizens in Israel equal, where would be the problem?

And in the Occupied Territories Israel behaves like a colonial power. Palestinians are cut off and hemmed in into small shreds of lands by ever expanding Jewish settlements. We are told that these advance positions are taken to counter the military threat from hostile neighbours and that Israel is really one of us, an outpost of Western Civilization. But truth is Israel is likely best seen as a civilization of its own (says Huntington). Being also a proper nation-state (that’s for sure) it follows only its own interests (notice my envy).

Israeli governments and their extended arm in the West certainly have had no qualms to draw the US into a series of Middle Eastern conflicts and to have it sent thousands of young men into a senseless death in the desert. Not that this was only made possible through the schemes of the powerful Israel lobby. Rampant American post-cold war hybris and autism set the stage for these endless wars that have drained the power of the West considerably. But these hawks won’t even stop now pushing for more military interventions in sand & turban countries until the West can no more.

So why should I care for them any more than they do for us?

Sorry folks, not our conflict. None of it.

Ignore. Unfollow. Disengage. Enjoy your limited time with something useful instead.