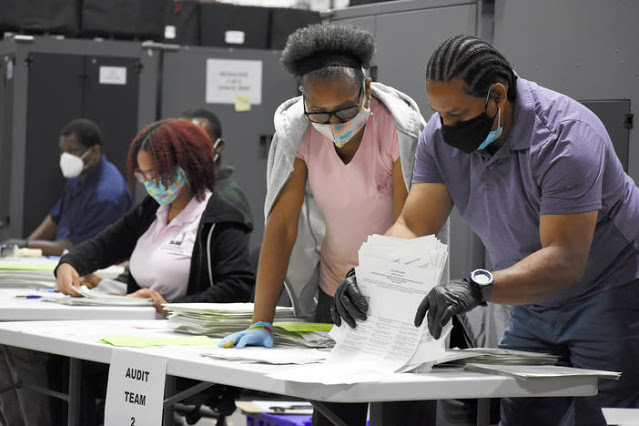 There are at least 4 reasons that suggest election fraud.

In this video Bret Griffith explains why Biden’s statistical probability of winning the election is very unlikely and there are enough inconsistencies that would require a recount.

Take Criffith Milwaukee as an example. In this city – which historically elects Democrats – 84% took part in the election. He compares it to the city of Cleveland, which is similar in size and demographics, where only 51% voted.

This reason alone is insufficient as an argument, but at least the high voter turnout raises questions that call for closer investigation.

“Is it likely that an active, sleepy candidate could top a rock star performance like Barack Obama’s?”

In many states, such as Georgia, there was a disproportionate number of voters who only voted for Biden as president but not for the Democrats in the Senate. For Trump (pure presidential voters) those votes were 818 – a tiny minority. For Biden, however, more than 95,000 such votes were recorded.

Statistically, this is very unlikely and requires further investigation.

In many states, against the legislation, governors have decided to introduce a new type of postal vote. They did so knowing that the legality and legitimacy of a mass of ballot papers would be difficult to verify.

In Pennsylvania, for example, 0.03% of the votes were stamped incorrectly and rejected.

In New York, for example, the rejection rate, or false vote, was 21%, 700 times the normal election.

These four arguments – along with many others – show that President Trump has the right to review the results in these states and to have recounts if necessary.