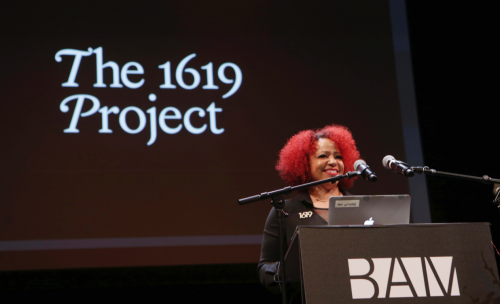 Andrew Roberts is a renowned conservative, Visiting Fellow at Stanford University and Visiting Professor at King’s College London, who believes that everyone in the world can be educated to love the democratic values of Western civilization. If only blacks and immigrants were taught to appreciate the immense value of Greek philosophy, Roman law, the Sermon of the Mount, the Renaissance, and the Enlightenment, they “could learn about the best of their civilization, and how it benefited — and continues to benefit — mankind.”

But unfortunately the West is denigrated rather than celebrated, and this misguided education is what fuels the animosity against this civilization. In an article published today in the Weekend Australian, “No reason to taint with guilt our faith in Western culture“, Roberts laments

The New York Times’ inane and wildly historically inaccurate 1619 Project, which essentially attempts to present the entirety of American history from Plymouth Rock to today solely through the prism of race and slavery.

For those who can’t keep up with the relentless drive of the Left against the West, let me inform you that the “1619 Project” was initiated by The New York Times Magazine in 2019 with the purpose of “reframing American history” around “slavery and the contributions of African Americans”. The year 1619 was chosen to counter the “White supremacist” idea that America began in 1776. The first enslaved Africans arrived in America in 1619, and since black Americans were crucial to the emergence of a democratic culture in the United States, this year should be commemorated as the one that gave “birth” to America and the Western world generally. A project curriculum was thus developed to be used by all grades from elementary school through college.

In August 2019 The New York Times Magazine, under the editorship of Jake Silverstein, published a special issue of 100 pages with ten essays, a photo essay, and some fiction, by African-American contributors only. Fueled by the George Floyd riots, millions of copies of this magazine issue have now been distributed to schools, museums and libraries as “required reading material”. The titles of the essays include:

Western Civ is Not “History of Humanity” But of Whites

Conservatives believe that these are just misguided individuals who need to be taught that the West loves them too, cares about them, for the West is about democratic participation, open to all individuals. What makes the West great is precisely its cultivation of values for “humanity”, and the West welcomes immigrants from all races and judges individuals by their character alone. As Roberts sees it:

instead of apologising for Western civilisation, we should still believe in it and be proud of it. For all that we must of course take proper cognisance of other cultures, in terms of both its sheer quality and quantity the legacy of Western culture is unsurpassed in human history. We are deliberately underplaying the greatest contributions made to poetry, architecture, philosophy, music and art by ignoring that fact, often simply in order to try to feel less guilty about imperialism, colonialism and slavery, even though the last was a moral crime committed by only a minority of some few people’s great-great-great grandparents.

Ever since I started studying Western civilization some three decades ago I have heard this argument in the conservative media. In the meantime, the Left has managed to replace the teaching of Western civilization across all colleges, which was once a requirement in most campuses, with a world history course that celebrates the “equal value” of all cultures, while condemning the West for colonizing Africans, Asians and Aboriginals and suppressing their “incredible contributions”.

Andrew Roberts says that “what the old Western civ university courses really did was to root a people in their past and their values.” But which “people”? Roberts is afraid to say that the West was created by Europeans, and that ancient Greece, Rome, the rise of modern science, and the Enlightenment have nothing to do with nonwhites. This is not their history.

He thinks that so long as we cherish the current diversity of the West, and define it as a “democratic culture” that believes in the equal rights of all foreigners to be its citizens, it follows that the history of this civilization includes “humanity” and should be celebrated by humanity. He can’t allow the thought to enter his head, for fear that he will be called a racist and anti-Western, that no matter how we think about the West, there is no way around the reality that this civilization and the United States were created by Whites. He thinks that as long as we find a few conservative nonwhites, a Thomas Sowell or a V. S. Naipaul, who cherish the way the “Western values of tolerance, individualism, equality, and personal liberty” gave “birth” to a “universal civilization” for “humanity,” we can have solid hope that millions and millions of immigrants, and millions of American blacks, will eventually come to love a civilization created by Whites. He can’t admit that Sowell and Naipaul only love the West insofar as this civilization is open to diversity. He can’t face up to the reality that a people that self-deny their history by interpreting it as the “product of humanity” will never be respected but will be laughed at and requested to hand over their history to other races.

This is particularly important to blacks. Blacks have contributed next to nothing to history and next to nothing to American history other than being slaves. If they are to make themselves relevant, they must make slavery the foundation of the United States and the West. This is what project 1619 is about. In order to make themselves relevant, blacks must “re-imagine” American history in such a way that they stand at the center factually, as the creators of democratic government, and morally, as courageous fighters against the White perpetrators of racism.

Roberts thinks that blacks will forgive Whites once they are taught in a Western civ course that “the abolition of slavery did not merely happen by votes in parliament and proclamations from presidents; it was fought for by (and against) Christians with much blood spilt on both sides”. But  those who control the Left, and the masses of immigrants continuously arriving in the West, don’t care that Whites were the only people to originate the abolition of slavery. To the contrary, this claim is seen by them as yet another instance of Whites pretending that they are a morally superior people.

Project 1619 is merely one more step in the eradication of White history. Across Europe, not just in America, Australia, and Canada, the history of the West is being radically reinterpreted as a history of immigrants. All Europeans, the Germans, the Brits, the Spaniards, and the Swedes, are being taught this lie to justify the current program of mass immigration and replacement. “Reframing” a people through race mixing-immigration requires “reframing” their history as a history of “diverse immigrants”.

Andrew Roberts and conservatives can beg all they want for Western civ courses, but these courses, and any learning that portrays Whites in a positive light, will never be allowed in the race-mixed West that Roberts endorses. Non-whites will respect Whites who affirm the West as “their civilization”, not as the civilization of “humanity”. Love for the West and promotion of diversity are totally incompatible goals.