Globalism Is A Cultural Marxist Ideology 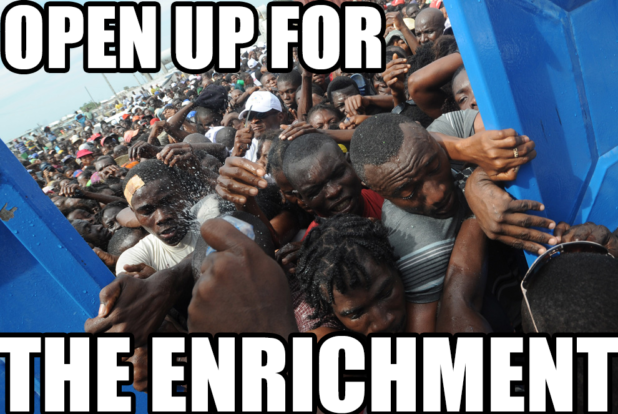 The claim that mass immigration is a necessary component of globalization is one of the many lies our politicians and the media propagate regularly. In the last election campaign, Justin Trudeau accused Max Bernier of “trying to make people more fearful about the migrations that are happening in the world, the opportunities around globalization”.

This lie was deliberately concocted by Canadian academics back in the early 1990s. The argument was also that multiculturalism was the best political framework for the integration of masses of immigrants within a global economy. Will Kymlicka, the main academic opportunist behind the theory of multiculturalism, told thousands of students that “massive numbers of people are moving across borders, making virtually every country more polyethnic in composition”.

Another exponent of this lie was Charles Taylor, the best known Canadian political theorist in the post WWII era. He wrote:

All societies are becoming increasingly multicultural, while at the same time becoming more porous. This porousness means that they are more open to multinational migration.

The fact is that all the highly advanced and globalized nations of the non-Western world are thoroughly globalized economically yet none of them promote mass immigration and multiculturalism.  Japan, South Korea, Taiwan, China, India — you name it — do not have porous borders.

The difference between Western nations and non-Western nations is that Western nations are dominated by an ideology that is more appropriately called “globalism”. We should not confuse globalism with globalization. Globalization is an inevitable component of the development of modern transportation and communication technologies. It is a process that can be traced back to the European discovery of the world, the commercial linking of the Old and the New world, the development of shipping and railway networks in the 1800s, followed by the spread of air travel and modern telecommunication systems, telegraph, radio, telephone, television, and the internet.

Globalism, on the other hand, is not an inevitable phenomenon but a political ideology aimed at the liquidation of the national identities of European peoples across the world. It is a deliberate political choice, no more inevitable than communism or transsexualism.

Yes, the absolute number of migrants in the globe has been increasing. The current estimate is that there were 272 million migrants in 2019, but this is a minuscule proportion of the world’s 7.8 billion people. Only 3.5 percent of the global population can be categorized as a migrant.

The vast majority of humans continue to live in their country of birth. Trudeau, Kymlicka, Taylor, and the entire media and university establishments are lying.

In the case of highly globalized Asia, immigrants have accounted for a mere 1.4-1.6% of Asia’s population over the last 20 years.

Moreover, the vast majority of migrants outside the West are “intra-regional” in the sense that they are moving in response to crises at home from one bordering nation in Asia, Africa, or Latin America to another. Hardly any of these migrants are granted citizenship in the bordering nations they are migrating to. The ones moving to such nations as the United Arab Emirates are temporary labor migrants coming to wash up the bodies and clean the toilets of the parasitic ruling class.

The migrants who are actually becoming citizens in other nations, not just crossing a border temporarily, are coming to the West. And since the Third World is bloated with masses of humans, the absolute number of these immigrants is very high, in the millions, and this is leading to the replacement of Whites in their own homelands.

Whites are only about 10% of the world’s population. Back in the year 2000, when only a few were talking about immigration replacement, and such talk was not deemed a “conspiracy theory”, The Guardian happily predicted the “last days of a white world“: “We are near a global watershed, a time when white people will not be in the majority in the developed world”  — in their own nations.

To properly understand how the modern economic reality of “globalization” was transmuted into the ideological hysteria of “globalism”, we need to frame this discussion within the wider ideological framework of “cultural Marxism”. By “cultural Marxism” I understand a wide variety of theories, movements, ideas and names, such as feminism, dependency theory, history from below, the Frankfurt School, Derrida’s deconstruction, Edward Said’s critique of Orientalism, Michel Foucault’s “New Historicism” and other influential currents developed in academia after WWII.

The center of gravity of cultural Marxism is the claim that races don’t exist, that racism is the worst moral crime a White human being can commit, and that Western nations have always been institutionally racist in their “systemic discrimination” against minorities, and in the special privileges that White heterosexual men have enjoyed against “racialized” minorities, women and homosexuals.

This cultural Marxist field of knowledge has included more recently the idea that Western nations with a strong sense of cultural identity are inherently illiberal and that liberalism requires mass immigration and racial diversity.

The field of power relations associated with this field of cultural Marxist knowledge is overwhelmingly obvious in the swift disciplinary punishment any dissenter against this knowledge faces in the West.

This is why the very use of the word “globalism” or “globalist” has now been identified as an “anti-Semitic slur” “deployed in far-right and conspiracy-theory-minded circles on the Internet“.

They don’t want Whites to learn that globalization can be practiced in the most intense fashion without allowing a single migrant into your nation and without imposing multiculturalism.

They want Whites to believe that the economic integration of nations via transportation and communication technologies entails mass immigration.

They don’t want Whites to know that the vast majority of humans (96.5%) continue to remain in their country of birth despite centuries of globalization.

They don’t want Whites to know that only their nations have been targeted for total race replacement by those who control our financial institutions, corporations and media organizations.