Legitimization Of Aboriginal Violence As A Political Weapon 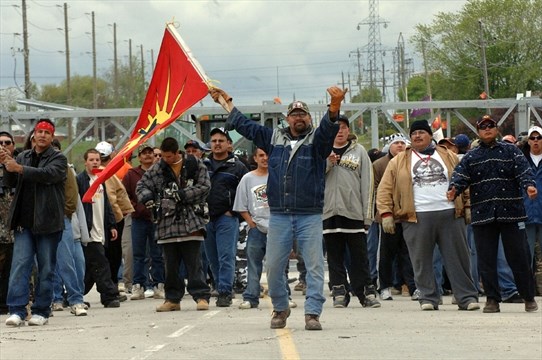 Like so many things subsumed by the Coronavirus pandemic and pervasive violent unrest in the United States, Canada was gripped by a crisis that has only now abated. Over the first two months of this year, Aboriginal groups, along with their Antifa allies, blockaded rail lines, bridges, and roads. They barred entry to ports and engaged in fisticuffs with police on Parliament Hill. What began with blockades and escalated into violent obstructive action in opposition to major infrastructure projects, expanded theoretically to include real and imagined grievances held by Aboriginal groups; this was accompanied by a deeper, more radical articulation of subversive ideas. Canada’s authority over Aboriginal territory was challenged; George Soros constellation foot soldiers flooded Canada in support to erode national sovereignty; and radical environmental zealotry entered into the mix to create a potent cocktail that opposed the interests of Canadians, their government, and the industries that employ them.

It began in late January, reached a peak of intensity in February, and continued into mid-March. Because of the Trudeau government’s limp-wristed response, the consequences have been devastating.

In the province of British Columbia, Canada’s western-most province, the Wet’suwet’en nation has a redundant and convoluted power structure: an elected body of band councils is shadowed by another hierarchical structure of hereditary chiefs. It is these hereditary chiefs that opposed the pipeline company, Coastal GasLink (CGL), a subsidiary of TC Energy, from going ahead with their gas pipeline project.[1] While the hereditary chiefs opposed the pipeline, the elected chiefs are in favour of going ahead with the project because it would be an economic and fiduciary windfall for the Wet’suwet’en nation. But the radicals held sway, and mobilized their loyal followers and attracted any number of non-Aboriginal Antifa miscreants.

Demonstrations and other actions in support of the renegade Wet’suwet’en Aboriginal band chiefs were undertaken throughout Canada.[2] Several rail line blockades saw demonstrators light tire fires and throw burning pallets on the tracks.[3] At one point the Premier of Quebec, Francois Legault, announced that Mohawk warriors were wielding AK-47s at a blockade located near Montreal. The accusation was panned as irresponsible by the Canadian mainstream media; but in a confrontation during the Oka crisis of 1990, Mohawk warriors had a variety of weapons: “they were equipped with some 500 weapons ranging from AK-47s and M-16s to .50 caliber sniper rifles and either RPG-7 or 66mm LAW anti-tank weapons.”[4]

Aboriginal groups have been emboldened by other factors: The United Nations Declaration For the Rights of Indigenous Peoples (UNDRIP); [5] the findings of Canada’s Truth and Reconciliation Commission (TRC), which concluded that Canada’s Indian Residential School system was an act of “cultural genocide” against Aboriginal peoples;[6] along with a whole host of successful litigation against resource companies;[7] and, most recently, the near complete capitulation of the Trudeau federal government.[8]

As soon as things got out of control, the Canadian government should have mobilized the military in an aid to the civil power capacity to assist the police when they were unwilling or unable to enforce the rule of law. In 1990, the Canadian army was deployed to oppose the actions of Mohawk warriors who had constructed blockades and a trench system near the town of Oka, Quebec. In a brilliant display of military professionalism, Canadian forces troops used steadily escalating pressure and psychological warfare techniques to disorient and unnerve the Mohawk warriors before advancing and systematically dismantling the blockades. Miraculously, there was only one fatality: a Quebec policeman, which was sustained prior to military involvement.[9]

Increasingly, Aboriginal groups in Canada have become gatekeepers as far as resource projects are concerned. They have obstructed or won compensation for their opposition to resource projects being undertaken on their land or what is perceived to be their land. The aforementioned UNDRIP declaration has encouraged these actions. The most contentious feature of UNDRIP is a call for ““free, prior, and informed consent” (FPIC) by Indigenous peoples before economic development projects can take place on lands they inhabit or to which they may have a claim.” Tom Flanagan has called this provision a recipe for legal chaos.[10]

The challenge to Canadian sovereignty, Canadian law, and even Canada’s legitimacy as a country has been challenged during this crisis. Derek Burney wrote in the National Post that

A government that seems incapable of enforcing the rule of law or asserting the national interest has lost the will to govern. It has effectively ceded the right to govern. Dialogue is no prescription for those who refuse to listen because they believe themselves to be custodians of the only truth.[11]

It is not in Canada’s national interest to allow militant Aboriginal groups to disrupt transportation networks. The implications not only hurt industry, agriculture, farmers, individual commuters and countless others, but these actions hurt Aboriginals themselves. These blockades have demonstrated how easily a group of radicals have been able to paralyze the country’s economy; expose the vulnerability of the country’s infrastructure; and severely damage Canada’s “reputation in the world as a reliable economic partner even if the short-term economic fallout is small.”[12]

After more than two months of disruption, a blockade remained in place near Caledonia, Ontario. Yet another illegal action undertaken in support of the Wet’suwet’en renegades.[13] As of 4 March 2020, Canada’s passenger train service, Via Rail, reported that 1,071 trains were cancelled because of the blockades, which affected more than 165,000 passengers across the country.[14]

This is a case study in how not to articulate, protect or enforce the interests of the historic Canadian nation. Canadians of European heritage along with our American cousins have a vested interest in standing up to radical groups be they ethnic, racial, ideological or political or a combination thereof. It is in the interests of Canadian to keep roads bridges and rail lines open, for resource projects in the extractive industries to remain viable and to enforce the rule of law against those that think they are beyond its purview.

To discourage future militancy, the Canadian government should actively interrupt Aboriginal leaders and groups that advocate illegal action against the state; encourage individual Aboriginals to move off reserve; remove radicals from on-reserve government structures; and explain what the consequences are for engaging in violent obstructive action.[15]

The Aboriginals and their allies who erected blockades of all sorts represent the radical consciousness of their own group. They are not representative of the whole or even the majority of Aboriginals who want to see the pipelines go through, the roads built, and the mining facilities constructed. When political violence is rewarded with monetary gain, it emboldens further anarchy. The Trudeau government has sent the wrong message and opened the door to a spring and summer of increased radical action.

What is absent in the talks about Canada’s national interest is any notion that Canadians of traditional European founding stock have any ethnic interests. If it is mentioned at all it is concealed within a discussion of economic interests of the country.

After almost two months of disruption, the Trudeau government caved into a band of radicals and set the stage for more blockades and confrontations in the near future.

[6] Honouring the Truth, Reconciling for the Future, 2015, available: www.trc.ca/assets/pdf/Honouring_the_Truth_Reconciling_for_the_Future_July_23_2015.pdf