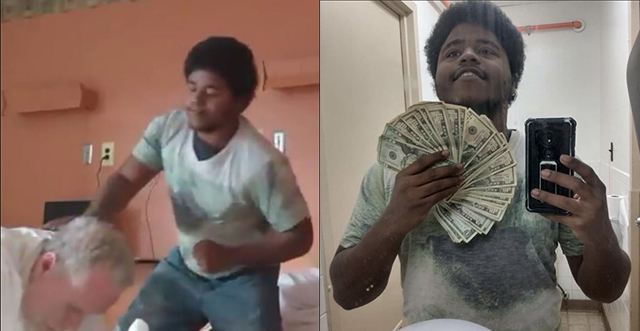 One of the propaganda lines that we are given by diversity promoters is that we should take in immigrants because they will take care of us when we are old. We’re told that they are saviors and they’ll pay taxes and they will do the jobs that we don’t want to do. We are told that they are all benevolent angels and they’ll work in care homes and take care of us and it will be a multicultural paradise on earth.

The CBC is pushing this kind of propaganda; telling us that Africans and Haitians have been taking care of our elderly during the COVID outbreak and we need to allow more “guardian angels” into our country through refugee resettlement. Is this really a good idea?

I came across an interesting video filmed recently in a care home in Detroit, which became viral yesterday in twitter. It’s filmed by a black male worker who looks like he is in his early twenties. The video is a “prank” video where he films himself violently assaulting sleeping elderly people. The video is interesting for a number of reasons.

First, two videos have surfaced; in the one above he is beating up an elderly white man, and in another one he is attacking an elderly white woman. This is important because we as European Canadians should be thinking about what the reality of eldercare is in an age of incessant anti-white propaganda and race mixing.

Both videos were filmed for entertainment. They are labeled as “pranks”. Criminal “prank” videos made by young black internet celebrities is nothing new. Guys like Boonk IG became famous making videos of themselves assaulting strangers, robbing strangers, stealing from stores, and doing public vandalism. He eventually got his jaw broken and stopped filming pranks, but there are lots of young African-American youths to take his place. This is simply a part of the culture.

Crime filmed by the perpetrator as a “prank” has become a major theme of internet culture of the African-American criminal underclass. This video of black on white elder abuse is just an extreme example.

Another reason this video is interesting is because it will not get any attention in the mass media. We all heard the story about Ahmed Arboury getting shot by two whites recently and the media wailed about white racism. The black panthers patrolled with guns in the neighborhood of the shooters with the implication that all whites are guilty – quite the opposite message of what we are told after Islamic terror attacks – that we should hug a Muslim to show that we aren’t racist.

Why does the media play up black on white violence while hiding violence against us?

The answer is because the anti-racists, the SJWs, the feminists, and all of the “do-gooders” are fundamentally not honest about their intentions. It’s the same reason that you don’t hear feminists talking about Rotherham or anti-racists talk about racism against East-Asians by Indians in Silicon Valley.

I think most people understand at this point how the POC coalition of the oppressed has been weaponized against white western civilization. The slant of the news media propaganda should be obvious. They play down POC on white crime because they are trying to make whites out to be the aggressor and the oppressor to give legitimacy to their Jew+POC alliance against our civilization. Telling the truth about interracial crime disparity obliterates their carefully crafted narrative of white victimizer and POC victimization.

The narrative is all a lie.

Detroit: From White to Black Rule

To understand how Detroit went from the Motor City of Henry Ford to a dilapidated slum where young blacks film themselves assaulting elderly whites in care homes for internet fame will shed light on multiculturalism and its consequences for our people.

If you ask people in Detroit why their city collapsed you’ll get a number of answers. One is that the auto-industry left the city. Another is that racist housing policies kept blacks in poor areas and denied them economic opportunities and when the racist whites left the city had no tax base and a population that had been deliberately kept uneducated. Some blame unions – particularly the police union that demanded payments that the city could not afford – which eventually led to huge police cuts, the subsequent proliferation of crime, and then slow decline into the abyss.

Detroit was a white city. It was the city of Henry Ford. It was a city with a culture of innovation and automobiles were a huge technological breakthrough. Automobile manufacturing created good middle class jobs for the regional economy and was a pull mechanism of predominantly black immigration.

Henry Ford wasn’t a racist. When blacks migrated into the city to get jobs in the factories Henry Ford didn’t try to keep them out. He even wanted to give a living age so that his workers could buy the necessities of life and keep money flowing in the economy. In his book he mentioned paying five dollars per week which was good money at the time.

Then you had a black population explosion, rising crime and dysfunction, then business flight – this is what people call the “collapse” of the Detroit auto-industry as factories moved to other cities with less crime and dysfunction. Then you had the start of white flight and as the demographics continued to shift and racial tensions got worse and worse. By 1967 when the riots happened Detroit was a majority black city and the riot burned the majority of the whites out.

It was called a race riot but is really what people used to call a “pogrom”. It was ethnic cleansing that pushed most of white Detroit out of the city.

Following the riot were initiatives such as “desegregation bussing” to try to eliminate black-white disparity in scholastic achievement. That meant that even if you were a white that had a property in one of the few halfway functioning neighborhoods in the city your kids would be bussed into a dangerous school so that they could experience “diversity”. The narrative was that black students were failing because their schools were too segregated.

Desegregation bussing completely removed the barrier to predation of white youths by the black criminal underclass.

That meant that it was impossible for whites to put their kids into safe schools because “desegregation bussing” meant that they didn’t have the choice of which school their kids went to. That spurred more white flight.

Then in 1974 Detroit got its first black mayor – Coleman Young. He was described as a “black radical” – but he was really just an anti-white black kleptocrat of the sort that you see in post-colonial Africa. I’ve heard him described as the Mugabe of Detroit. He served for twenty years.

Around this time you had the rise of hip-hop culture which completely replaced traditional white American culture of Christianity, submission to the law, restraint, frugality, and the protestant ethic of honest dealings and hard work with the criminal code of hatred of authority, hatred of police, hatred of whites, glorification of ignorance, glorification of violence, materialism, drug dealing, pimping, and with the over-arching belief that all of your bad behavior can be blamed on racism and the history of slavery.

The video below is of majority black Detroit in 2020, filmed by the youtuber Charliebo313 during the COVID lockdown. You can see that the city has mostly been burned to the ground and is slowly fading back into nature. Some people say that much of Detroit could someday get turned into prime farmland.

The video below is of the last white woman on her block in Detroit. She missed her chance at white flight and she’s on her own. The rest of the houses have been looted and burned down and hers is the last one left. In the video she says that she lost her job and is too poor to leave. At the end she mentions that she is on the waiting list for Senior’s housing. This is the kind of person that will end up in a very vulnerable situation one day in a care home.

For the people that foolishly move back to Africanized cities like Detroit, they are left with the reality that they are entering an entirely different civilization than the civilization of Henry Ford. The link below is of a woman that moved to Detroit – enticed by cheap property only to have a squatter move into her home that she was not legally allowed to evict.

The video really has everything: a clueless white single mom with a mulatto kid that thought moving to Detroit was a good idea and ended up with an African freeloader living in her house that she can’t evict.

It’s easy for us to laugh but that is our future.

In sum, I want everyone to think about Detroit and its collapse and what life is like there for whites that have to experience diversity in all its vibrancy.

Diversity is not just the grooming gangs of Rotherham, or the trucks that drive through crowds in Sweden and Germany, or the lawless Banlieues of Paris, or the acid attacks in London.

Diversity is our elderly getting victimized in care homes and a system that is unwilling to protect them.

We in Canada have a hostile government that brings in foreigners, radicalizes them with anti-white race hate using the libel of white racism and the canard of minority victimization so that the colored races of the world can be used as a golem against us and our civilization. Many of those aggrieved people are going to seek revenge against us.

That puts us in a very dangerous predicament. Think about that when our government says that foreigners are going to take care of us when we’re old.