Who is Dr. Theresa Tam? 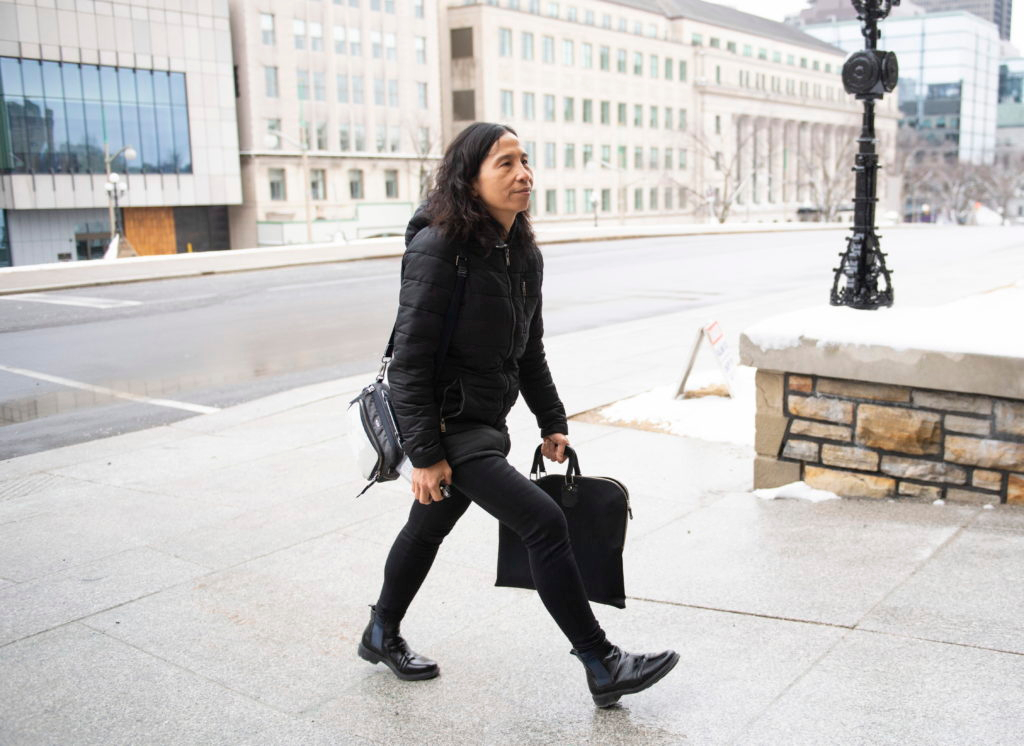 The official line is that she is the “Chief Public Health Officer” of Canada. With this position, she has become, in effect, the Canadian official behind the government’s COVID-19 containment strategy. But who is Theresa Tam, really?  How did she acquire such a powerful position, with the ability to close down a whole nation based on such inconsequential statistics of 3-4% cases, which even the 2018 flu virus, with double the cases, wasn’t able to do?

Tam appears daily in the living room of Canadians reporting on the state of the virus on various television stations with her government colleagues, Minister of Health Patty Hajdu and Deputy Prime Minister Chrystia Freeland, telling Canadians to “practice physical distancing” to “fight” this “pandemic.”

Initially, Tam questioned the public health risks of the virus:

Right now, the cases are in China. Very few are exported. Yes, there’s human-to-human transmission, but those are generally for close contacts…for the general public…the risk is low in Canada.

But all this changed by late March, and Tam told Canadians in her April 3 television update:

There are now 11, 747 cases of COVID-19, including 152 deaths. Again this represents infections from previous exposures, and not what is happening right now. So our urge is that even if you’re not hearing about cases in your community, it doesn’t mean that there is no risk of exposure, and we must all consider that anyone could be infected and keep our two meter distance as the safest approach. [Tam’s full presentation is available here.]

Her message now is that anyone, and everyone, could be infected. This was her rationale for assisting in the nation-wide emergency alert to Canadians that they “Stay Home; Restez a la Maison.”

“So, of course, we owe it to everyone to not put Canadians at risk, and to do all we can to stop the spread of COVID-19 right now,” says Tam of her decision. Her prescription is to “practice social distancing, self-isolation, hand hygiene.” Her recommendations have indeed evolved into simplistic symbols, the images for which bear a strong resemblance to public health information on avoiding the flu, which are presented every year for the virus which, at its most lethal, killed 8,500 people in 2018. And the country has never shut down for fear of the flu.

The only item missing on the Corona-Checklist is “Get Vaccinated.” So far.


And from this information, a lockdown of dutiful, and guilt-ridden, Canadians became the reality. Across the country, dutiful citizens closed their shops, left jobs, shuttered schools and daycare centres, and stayed home, waiting for Tam’s daily updates, to urge them to participate in the next battle tactic against their invisible enemy, who could be lurking anywhere.

And they all obliged. Tam’s draconian “Stay Home/ Restez a la Maison” ordinance could be the beginning of much stricter enforcements to come, based on her premise that “anyone could be infected,” which means that we could all be infected.

As the Chief Health Officer in Canada, Tam provides the data, the analyses, and the recommendations on health care and enforcement to the government. Prime Minister Trudeau, clearly following the advice of his Chief Public Health Officer, officially stated in March 29 during his daily update that:

There are no plans to call in Canada’s military to enforce quarantine or self-isolation measures amid COVID-19.

The Canadian Armed Forces are there to help when Canada is in need…Right now we have not received any specific requests and there are no plans underway to have the army intervene.

“All Canadians must act now to reduce the spread,” orders Tam in her pre-taped video, which has the air of an infomercial, appearing periodically on the CBC and CTV. And her emphatic “now” has a clear subtext that there are serious consequences for those who don’t help to “reduce the spread” of this “serious public health threat.”

So here we are, in the midst of the “global health crisis.”

So Who is Dr Theresa Tam?

Who is this woman now in charge of providing the “chief” medical information concerning Canada’s lockdown? Where did she come from? There is very little available on her biography, very little personal (and even professional) information on Tam. Somewhere there was a post that she was 55 years old, but I couldn’t find:


She is listed having expertise in immunization, infectious disease, emergency preparedness and global health security. Something more specific, and odd, is: “she is a graduate of the The Canadian Field Epidemiology Program” which looks like an internship or upgrades for employees in the Public Health Agency of Canada.
But I couldn’t find her medical school records to find her year of graduation, or any other post-grad qualifications.
I am usually pretty good at finding out some of this information, but to draw a blank on almost all the key components that make up a biographical profile is very strange.

A page on the Government of Canada website states that she is an expert in “immunization, infectious disease, and global health security.”

Her associations with the World Health Organization (WHO), I believe, has brought her in contact with Tedros Ghebreyesus, the Ethiopian Director General of WHO, who was key in starting the misinformation about the global coronavirus panic. Ghebreyesus downplayed the virus outbreak in Wuhan, China, defending China’s President Xi’s misinformation on the severity of the virus, and refusing to support President Trump’s travel bans and restrictions of flights from China.

Tam has close links with the WHO as a consultant. I believe she personally knows Tedros Gebreyesus, who was key in starting the misinformation about the global panic. She is a feminist and a socialist, as Tedros is also a life-long Marxist, starting from his political positions in the various Ethiopian Marxist governments from the 1980s and the 2000s.

She has politicized her role in Canadians’ health and well-being. She declares, following the socialist mandates of the WHO, which is clearly her own political stance:

A healthy Canada requires us to level the [social] playing field.

And she was present at a conference in Vancouver in 2019 titled “Women Deliver,” presented by an organization which aims to indoctrinate young women, Canadian alike, with feminism, by advancing “Gender Equality and the health, rights and well-being of girls and women everywhere.”

We learn from Carolyn Brown’s article, “WHO veteran heads up Canadian public health“, that, according to Tam, “emergency committee members do not represent their countries.” Brown explains that Tam “was selected for her background in field epidemiology, travel health, emergency medicine and pandemic preparedness.”

Tam is an advocate for vaccinations, pressing for the coronavirus vaccine, which requires $CAN 192 million for its development, despite the very low fatal cases from the virus, with the majority of those affected resuming full recovery. This puts her as an expert on vaccine preparation, which has been the topic of her latest updates on the conronavirus fight. But here is a report on the risks of a coronavirus vaccine, which Tam has not presented in any of her reports.

Tam has worked with other health emergencies before, including the Ebola outbreak, SARS and the H1N1 influenza, which helped her prepare her COVID-19 health strategy. Three years ago, discussing the SARS epidemic, Tam stated that her job would be all about “harnessing the efforts of the many to protect and promote the health of all Canadians, including the most vulnerable in our society.”


When she said those words nearly three years ago, Tam probably didn’t imagine she would be ordering Canadians not to leave the country and to socially distance themselves en masse.

Recently, the Canadian government made donations to China of masks, gloves, and protective gear, while at the same time Canada was beginning to experience shortages of these materials. The donation and the shortages were discussed in the Senate. I believe it is the Chinese Tam who was behind all this.

The Media Says “A Star is Born”

This uncharismatic woman with the monotonous voice is being touted as “a new star is born” who “offer[s] clarity in the age of the coronavirus.”

Tam downplays the China origins of the virus, attempting to silence those who hold views that link the virus to China, and Chinese in Canada, by warning Canadians to stop stigmatizing the Chinese in Canada. Her accusations of racist acts towards Chinese in Canada are largely anecdotal, which is strange as she is supposed to be an expert on epidemiology and data analysis,

These actions create a divide of us versus them…Canada is a country built on the deep-rooted values of respect, diversity and inclusion.

I should add that there is a revealing item from CPAC on face masks which brings up Tam’s own reference to her Chinese background, and where I believe she sends subtle messages of the kind of draconian, perpetual, “imprisonment” of people behind masks, as she says people in China have become accustomed to.

I think we’re all learning, through, I think particularly Western societies that are not used to wearing masks in public, are sort of learning this as we are going along, and so, some of this information I think is in real time, undergoing evolution.

I wonder if she is a lesbian? Her whole demeanor, sometimes charming, at others draconian, and also the weird all-black legging and jacket she wore in one of her photos (I’ve put in the article), her unkempt hair, unlike Hajdu and Freedland who attempt at some femininity, suggests this.
All in all, Canada’s health is being overseen by a Chinese women we know very little about, with a very strange personality.
***