The Logos of E. Michael Jones 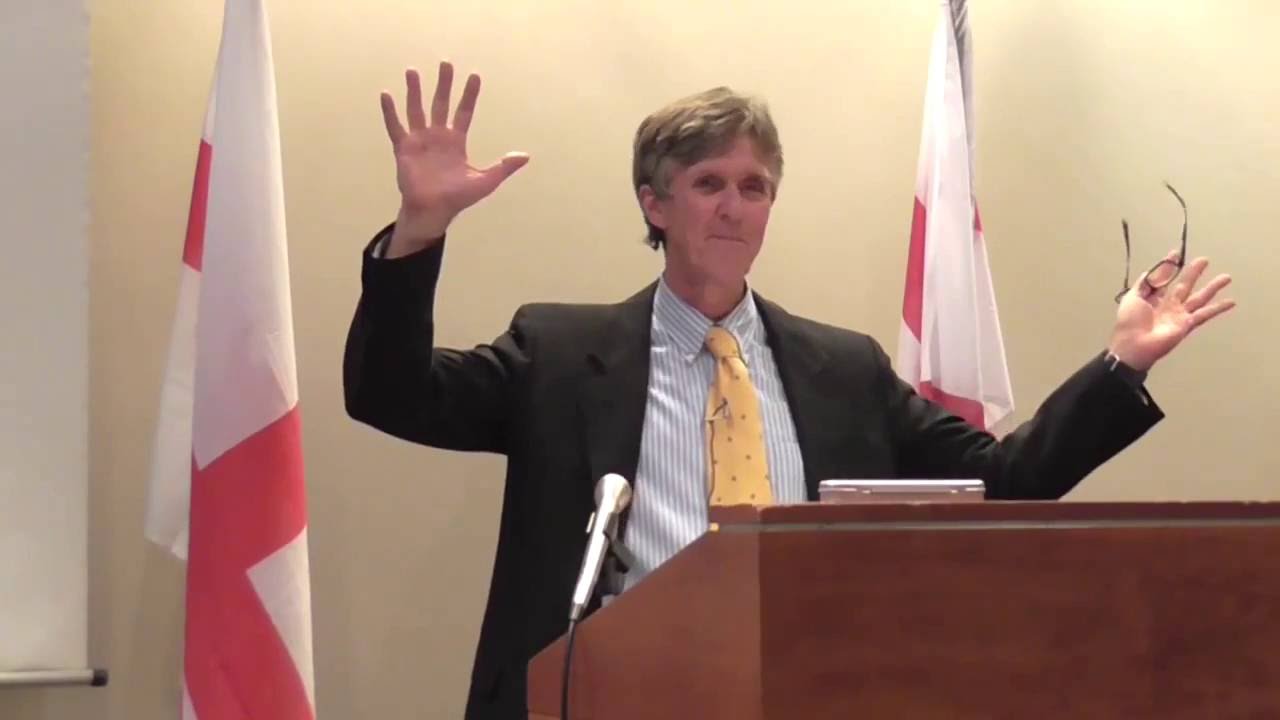 E. Michael Jones, a prolific Catholic author and controversialist, is best known as the author of Libido Dominandi and The Jewish Revolutionary Spirit. He received his Ph.D. from Temple University in 1979 and went on to become an assistant professor of American Literature at St. Mary’s College. One year into his tenure track position, he was summarily terminated for his public position against abortion. That event spurred him into starting his magazine, Fidelity, later retitled as Culture Wars (his translation of the German Kulturkampf). The magazine set out to explore the problems in the Catholic Church that led to Jones’ loss of his job. How exactly could a professor be fired for opposing abortion at a Catholic university?!

Since that time, Jones has gained international notoriety and amassed a considerable following. Besides his co-religionists, he has found a ready audience within several factions of the dissident-right. This is rather surprising, given that Jones strongly disagrees with the broad-strokes of the dissident-right on numerous fundamental issues. His beliefs differ so profoundly that their respective worldviews are impossible to reconcile.

In the following, we will attempt to convey to the reader, in as concise a manner as possible, the beliefs of Jones on three core issues, namely: race, Intelligence, and civilization.

I fail to understand how converting racists, materialists and Nazis to the Catholic faith, and encouraging young men and women to get baptized, married and have kids could possibly be construed as a bad thing. – E. Michael Jones

Jones believes that race is an abstraction of the mind (“a fiction”) and an obsolete ideology; it appeared, flowered briefly, and died, all within the span of a hundred years (1855-1945). Having characterized this conception as both upstart and failure, he rails against it, arguing that

Race is a creation of the biological materialism which found its most prominent spokesperson in Charles Darwin.

His choice of the Darwinian-Spencerian articulation is convenient; he ignores other definitions that cohere perfectly with his worldview. Unfortunately, this is as far as his reasoning goes. And, if pressed for justification, he will only restate that which he has previously put forward — seeing no reason how anyone on earth, possessed of a right-thinking mind, could doubt him.

What Jones does believe in, however, is “ethnicity”: this trait is defined by social groups that have common cultural traditions. Of course, for Jones, these common cultural traditions are not influenced by genetics to any socially relevant degree. In fact, because he believes racial and genetic influences are absolutely incompatible with the Christian understanding of free will, Jones rejects these as determinants of human behavior. Hence, such theories are also equally incompatible with his critique of Jewish behavior (rooted in cultural-religious failings) proposed in The Jewish Revolutionary Spirit.

To understand his view on mestizaje, a reader need only examine the description of Ethnos Needs Logos on Amazon’s Kindle Store:

In Mexico, unity happened by miracle overnight. Juan Diego’s tilma, with its depiction of the Virgin Mary, is the symbol of Mexico, the basis for a Mexican culture that has survived the predations of the richer and more powerful neighbor to the north. Our Lady of Guadalupe [the Catholic title of the Blessed Virgin Mary associated with a series of Marian apparitions] appeared as a mestiza, a mixture of European and Native American races. She was the cosmic symbol of the race mixing the English feared since the moment they set foot on the soil of the New World. She was the symbol of Mexican identity. She was the symbol of Catholic race-mixing and the antithesis of England’s and later America’s and still later Germany’s ideology of racial superiority.

Clearly, Jones favors miscegenation, suggesting that it even earns the approval of Heaven itself. And this quote isn’t exactly an outlier; his oeuvre is replete with multiple pages of thought flowing in the same vein.

How then, did so many come to believe that Jones supports, at least to some degree, “ethno-nationalism”? It should be patently obvious at this stage that he does not (and cannot) support any form of racial-nationalism. To elucidate, the Catholic Church is both Catholic and universal — and the historical teachings of the Church clearly affirm that it is for human unity and opposed to division. Jones invariably agrees, diametrically opposing “race,” “racialism,” and “racism.” He believes the first two to be incompatible with Catholicism and factually unsound. Like any other liberal, he believes the third to be a wicked sin. All three are to be rejected for the division they impose on the worldwide human family. Jones, therefore, speaks out against all forms of racial-nationalism. He even rejects monarchy, calling it “an obsolete form of government which will never return.” What Jones does support, however, is a variant of democracy — “Catholic democracy”, an innovation that mixes the neo with the archeo: modern democratic ideas and traditional Christian values. We will note here — in stark contrast to Jones’s oft-repeated claim that an African could, e.g., become Polish — that not even in the Soviet Union itself was it believed that Turks and Uzbeks, for instance, could become Russian!

Race difference in intelligence was created in America at the beginning of the 20th century… in order to exclude certain groups of people from the United States of America. It was based on immigration. … I’ve never been convinced that the IQ test was an accurate indicator of intelligence. – E. Michael Jones

True to form, Jones believes that IQ tests are virtually useless; rather than measuring intelligence, they only measure an individual’s ability to take IQ tests.

Marching against a hundred years of studies and any remotely reasonable inferences of the data, Jones offers this stunning critique:

Race difference in intelligence was created in America at the beginning of the 20th century.

As Dr. Edward Dutton correctly points out to Jones in their video discussion,

The fact that an IQ test was invented in 1912, and the fact there was a motive for wanting to deploy it, does not mean there are not differences in intelligence between different groups.

Unable to respond directly, Jones parries with a different line of argument, albeit one that also confuses wishful fiction with fact:

What you see over time is that the test becomes synonymous with intelligence.

Dutton’s polite response returns to the central issue: IQ correlates well with other measures of cognitive ability, uti sunt educational attainment at 0.7 (a good test being one that correlates in the expected direction with other examples of what it is you’re trying to measure and not something else). Jones ostensibly acknowledges this but stays put in his epistemic foxhole, returning fire. He repeatedly demonstrates his complete lack of knowledge on the topic, seemingly brought about by his inability to accept the idea that intelligence might actually be measurable.

It is abundantly clear that

Wondering if there was anything more to his position on IQ, a request for a greater explanation was mailed to Jones. His response reads:

Standardized tests are a good indication of how well you take standardized tests. They don’t help a doctor diagnose appendicitis or a writer write a sentence. We published an article in Culture Wars a few years back by Chris Rapcewicz on how IQ tests were used to discriminate against certain groups. You find it by searching the index at culturewars.com.

Because Jones denies race, and all that it implies, he consequently rejects the traditional definition of the word “nation” (a race of people) — with its very etymology going back through old French to Latin. He instead accepts the modern post-racial definitions, which can be readily found in any recent mainstream dictionary from any post-Enlightenment Anglophone country.

Regarding the creation of modern Europe, Jones writes,

Ethnos [“ethnicity”] needs Logos, especially if it aspires, as every ethnic group does, to become a nation. Logos, not race, is what allowed the various warring tribes of Europe who plundered the last structures of the Roman Empire to coalesce into the nations that constituted Christian Europe in a process that lasted in some instances over a millennium.

Indeed, it was logos alone that was responsible for the immense success of the warring cultural groups of Europe.

As anyone well acquainted with Jones should know, his central intellectual enterprise is Logos, which he defines most simply as “divine order” — the order and harmony of all creation, which serves as evidence of a divine Creator. “God” is also “Logos” according to Jones. Additionally, he affirms that the link between the creator and the created is Logos. And that we can participate in God’s mind, if we are rational creatures, by being rational. By this, he means that we can participate in God’s mind, as rational creatures, by living according to God’s will — i.e., by living a Catholic life.

Without any other legs to stand on, Logos is the primary factor in Jones’ worldview that determines whether a group will stew in abject poverty, squalor, and disease or ascend to the abundant and divine comfort of high civilization. The secondary determining factors are geography and physical things like mountain ranges.

It is from this position, having rejected so much truth, that Jones puts forward claims such as, “Without the Catholic Church, Europe would resemble Somalia” and “If it weren’t for St. Boniface, my ancestors would still be chasing pigs through the forests of Germany and worshiping trees.”

Beyond any doubt whatsoever, Jones’ Logos is nothing more than the functional equivalent of Magic Dirt Theory, which John Derbyshire adeptly explains:

The core idea is that one’s physical surroundings—the bricks and mortar of the building you’re in, or the actual dirt you are standing on—emit invisible vapors that can change your personality, behavior, and intelligence. That’s why, for example, you read so much about “bad schools” or “failing schools.” The thing to be explained is that schools whose students are overwhelmingly non-Asian minorities—blacks and mestizos—get much worse results on academic tests than schools whose students are majority white and East Asian. This has been so for decades, defying even extravagantly expensive efforts to change it, like the Kansas City fiasco of the 1990s.

For a deeper view on the subject, the reader may turn to one of the many available philosophical critiques of Catholicism or liberalism; however, here we are only concerned with the essence of Jones’ thought.

In light of this information, we should be careful about how we approach and interpret the work of Jones. While some important ideas may be gleaned from it, it is largely incongruent with more robust worldviews. We should also be cautious of Jones and his intentions, given that he is clearly opposed to what we believe and appears to be consequently trying to convert us to his Catholicism.