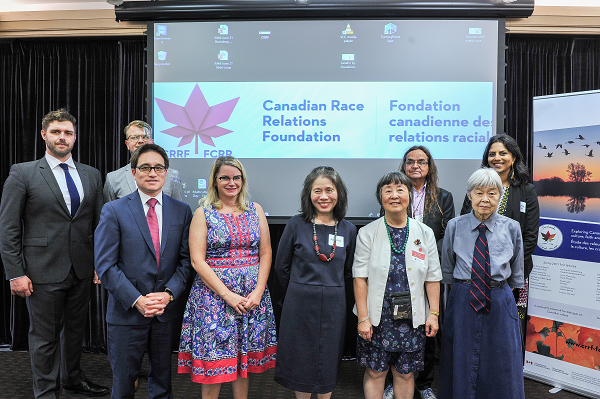 First of all I would like to acknowledge how fortunate we are to be living in this great and tolerant country.

I am writing you today as a citizen of this great country to express some concerns that I have with regards to legalized discrimination in Canada, both in workplace applications and with regards to Government granting programs. Unfortunately these concepts are emboldened by your organization and other propaganda devices.

The Canadian Race Relations Foundation (CRRF) is a bureaucratic organization paid for by the tax payers of this country. It appears that this organization’s approach is to center-out European Canadian’s as inherently biased, while you pat yourselves on the back.

One instance is the allowance of Sikh-Canadians to wear traditional stabbing weapons in government buildings and courtrooms. In other provinces, Sikh’s are exempt from wearing motorcycle helmets. Sikh-Canadians are a community that has a higher net income than the majority, have formed majority enclaves in places like Brampton and Surrey BC, and who are advantaged by being classified as a protected race (not white) in the Employment Equity Act. In other terms, Sikhs are allowed to hire their own kind and not required to entertain applications for Euro-Canadians. This privilege is not reciprocal. When will this be amended?

If your true mandate is to eliminate racism in Canada, we need to start treating people equally and this includes Euro-Canadians. Why will my children, and their children be labelled as inherently biased while those of other races are given the benefit of their skin colour in the eyes of government? Do any groups other than Caucasian’s have these inherent “biases” that need to be address? If we’re having this conversation, I think so.

I find it interesting that the CRRF board of directors is NOT very inclusive towards European Canadians which shows a level of hypocrisy that can not go unnoticed. You are centering out a certain group and that in itself is intrinsically biased.

On a regular basis, we the public hear a lot from talking heads both on television and in the news media regarding “systemic discrimination” but they all speak from one side of the conversation while ignoring the other perspective. This concept is no more evident than in job and grant application forms, particularly when applying for entry level positions at both public and private sector companies ranging from Canada’s major broadcasting companies to the country’s four big banks.

To add some context to my perspective I would like to provide a bit of background:

I come from a fifth generation blue collar Canadian family of European heritage. Both of my grandfathers were fluorspar miners and fishermen in the dominion of Newfoundland. My mother and father were the first generation to move from Newfoundland to Ontario in the 1980’s where my father has worked as a structural steel erector for many years and is now approaching his retirement age. My mother worked part time and was the homemaker we needed throughout my childhood and my brother’s.

After graduating high school in Brampton Ontario, I earned a certificate in media foundation from Humber College before a 3 year diploma from Centennial College in the field of Broadcasting and Film.

As I’ve come of age, I have recognized a disturbing pattern of discrimination in our country, and it comes in the form of blatant discrimination that has been sanctioned by our government.

As an artist and filmmaker who grew up in a low-middle class environment, I have attempted to receive grants for my media projects. The application form questionnaire specifically asks for details of my physical identity in the form of race and gender. I’ve reluctantly accepted this hard-to-swallow pill.

My work experience is diversified in other areas, particularly anti-fraud investigation for which I’ve worked in the field for a moderate sized company for about four years now. In exploring my options and recently applying for jobs at two of the big four banks in this country, I was presented with a very similar questionnaire to the grant proposal questionnaire I mentioned earlier. I was asked to provide details of my race, gender as well as my personal sexual orientation. Being a so-called “cis-gender” white male, my resume is immediately put aside, for the sake of “diversity” before the opportunity for an interview even takes place.

This begs the question, in today’s Canada, how is this personal information relevant to my work performance? Why has my physical and sexual identity become a reason to either hire me, or put my resume to the bottom of the pile where it is most likely to end up to satisfy these policies? Of course there is an option to not identify. However, if I did not identify, I would simply be inferring that I am indeed not a member of a protected group, and now ripe for discrimination. Factually, this questionnaire could be simplified with one question: Are you an able-bodied, straight white male? Yes or no? The desired answer would be achieved.

Naturally in today’s world, the demographics of Canada are changing. Caucasians now happen to be a minority in some growing areas in our country. This is evident in the inner city neighborhoods as well as the suburbs around our major cities. From my personal experience, I was a minority at my high school in Brampton in the early 2000’s and the non-white population has only grown since then. I have experienced prejudice in social groups in high school and in college and felt instant animosity towards me on numerous occasions, usually before I even open my mouth.

Furthermore, statistics show that East Indians and Asian Canadians earn a higher household median income than Caucasians in Canada however these groups remain protected by the employment equity act while native Caucasian Canadians remain discriminated against, since the act was written and implemented in the 1990’s.

It is clear that in Canada today there is only one group of human beings that is exclusively classified as having an overwhelming advantage in opportunities, regardless of the obvious discrimination they face in public and private sector applications. That group is heterosexual white males, in particular.

These practices are clearly re-enforced with the Employment Equity Act of 1995 and my argument is that it is time we re-interpret this act, in today’s Canada. I have some questions with regards to your perspective on Employment Equity in an age of diversity quotas:

1. At what point do we reassess and debate the Employment Equity Act with our changing Canadian demographics?

2. When will we seriously assess the major conflict between the Employment Equity Act and the Charter of Human Rights and Freedoms?

3. Why is it assumed that because I have lighter skin and I am a male that I am at an advantage in Canada in 2020?

4. How do I explain that our government sanctions discriminatory policies to my children when the time comes for them to apply for entry level positions knowing they have done absolutely nothing wrong in their lives to warrant this complete unjust form of discrimination? Should they simply anticipate and accept this?

5. Will Canada thrive or become a weaker global competitor if we continue to sanction these discriminatory practices that place skin colour and gender diversity quota’s above individual merit?

A heterosexual Caucasian in today’s Canada is at a disadvantage in most areas and is the least protected “identity”. I think this predicament is party because we are made to feel guilty for the past and we are less inclined than other races and faith groups to complain and protest about the discrimination we face.

I hope this note finds you well. Wishing you and yours a healthy and prosperous 2020. Thank you for your time.

[Editor’s Note: Contact CFFR.  Ask them why they think that ultra-rich Chinese immigrants should be given preference over poor unemployed white Canadians. Ask them why Asians with a higher average income and education than Whites are identified as members of an “oppressed minority”. Email: info@crrf-fcrr.ca]