Why I Support A Moratorium On Immigration 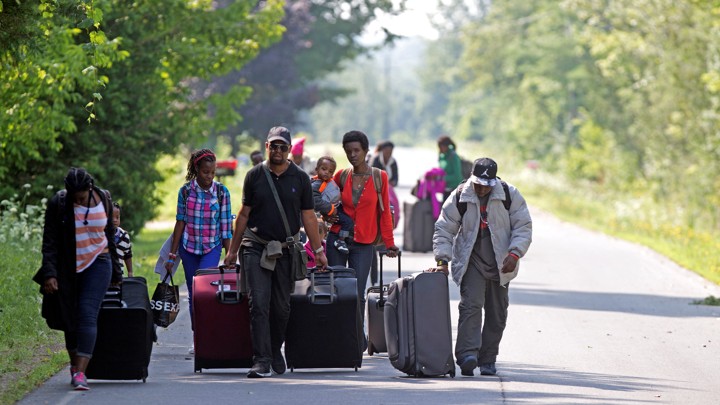 While it is easy to target illegal entries into the country, the mass LEGAL immigration is actually a much larger problem.

In recent years, we have been taking in a million people LEGALLY into Canada. This does not include visitors or illegals.

To start off: our governments lie about the total number of people entering annually. Categories such as student visas, temporary foreign workers, and international mobility program bring in hordes of people — are not temporary. These groups generally have access to a permanent residency pathway, and other ways to stay longer. There are several pilot programs underway on top of these, including a small amnesty-for-illegals program in Toronto.

Even if these temporary workers were to go home (and many don’t), there is the topic of remittances. According to the World Bank, hundreds of billions of dollars are sent from the West annually. How does it help our economy when money is pulled from it?

Bringing in large numbers of people as cheap labour results in our own citizens having to compete against foreign, often subsidized labour. It does a huge disservice to those who really need the help.

Importing students at this scale means that Canadian graduates are forced to compete against others for a limited number of jobs. This is includes professional and skilled programs. How does it benefit Canadian graduates to have their prospects cut out like that? Does the downward pressure on wages help? How does it benefit other nations when their talent leaves is a sort of brain-drain?

Considering all the fuss about environmentalism and climate change, answer one question. How does mass immigration remove or minimize stresses to the eco-system? How does clearing new areas for farming and housing avert this climate emergency that we are supposedly in?

The overwhelming majority of immigration coming into Canada over the last several decades is of 3rd World, non-European migrants (80 to 90%). A quick glance at the top 10 “source” countries tells the same story year after year: (a) China; (b) India; (c) the Philippines; and (d) an awful lot of Muslims. Multicultics and Civic Nationalists — which are the same thing — tell us that people who have nothing in common with each other can form a cohesive society based on abstract “values”. It’s nonsense. While other groups want to retain their identity, why are Europeans considered bigots for attempting the same?

The result is predictable: enclaves forming in the major cities, such as Toronto, Montreal, Calgary, Edmonton and Vancouver. In reality, multiculturalism is a lie that never works out as planned. Balkanization is not diversity. Furthermore, it is not a lack of screening, but the deliberate efforts to forcibly remake Canada.

The breakdown of social cohesion is obvious. And anyone who has read Robert Putnam’s study will see why.

At the heart of this is the replacement agenda going on in Western nations. Canada, for example, was 96% European, according to the 1971 census. It was 72% based on the 2016 census, and still falling. Europeans will be a minority in the next decade unless something drastic happens.

This is about preserving the foundation of European nations and ones formed in that image. Replacing the population replaces the culture and the history. It doesn’t matter to me whether it is replacement by Muslims, or by high IQ, high skill Asians. I still don’t want it, and nor should others. Call it tribalism, but Westerners should be allowed to protect their identities too.

It never seems to dawn on “conservatives” that bringing in large numbers of people from left-leaning nations means political suicide. Demographic shifts will make their ideology completely unelectable. Their only concerns seem to be: (a) come legally; (b) be economically productive; and (c) don’t be a terrorist. But beyond that, conservatives have no will to preserve their people, culture, heritage, and traditions.

While the solution may seem to be to import more Europeans, they cannot be spared as THEY are being replaced in their homelands as well. Europe is being flooded with Middle Eastern and African “refugees” and migrants. We cannot help ourselves at the Europeans’ expense. Still, we must resist the replacement here.

For these reasons, and others, I support a moratorium on immigration into Canada.

More of my work is available here.